Denny Hamlin moved into a new house this year. The home sits on Lake Norman aka NASCAR lake in North Carolina.

The exterior design is amazing but the inside is staggering. Beyond the technology, the garage is visible from the living room.

What’s in the garage? The Daytona 500 winning NASCAR racecar, of course. To date, it was the closest margin of victory in the history of the Daytona 500. Hamlin won by .010 seconds over Martin Truex Jr.

Hamlin worked closely with Thompson Custom Building Group on the design aspects in 2016. Upon recommendation, they selected Interactive Interiors to setup the brains of the home.

It’s a really smart home. TV’s, security, lights,  32 zones of audio and other things can all be operated, from a smart phone.

“Denny Hamlin is familiar with control because he had used a different system in a past home, but wasn’t happy with the complexity of the interface and the issues that kept arising,” says Brian Berg, president of Interactive Interiors. “He asked me to install the most reliable and easiest to use system on the market, and I confidently suggested ELAN.” 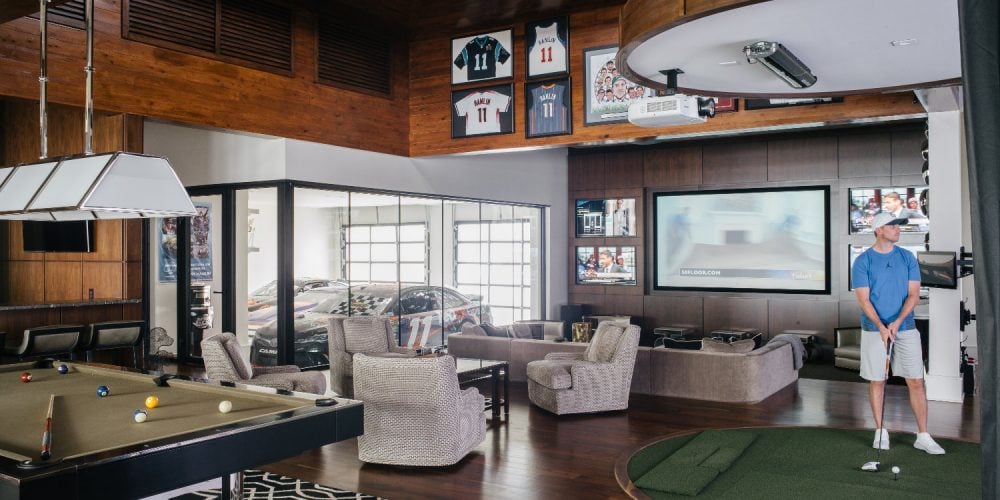 But, those 25 TV’s are cute in comparison to the projector room. Next to Hamlin’s Daytona 500 racecar, a 110-inch matte white projection screen with a black velvet frame. Painting the screen is a Sony SXRD video projector equipped with 4K Ultra HD resolution.

Along side the projector, 4 more little screens. These allow the home owner to watch 4 in-car camera’s and the race broadcast, at the same time.

“We worked closely with the custom cabinet builder to create 55-inch panels surrounding the theater screen so that Hamlin can watch five independent channels at the same time, which is ideal for enjoying different races or games simultaneously,” Berg says. “Together, we also designed a custom wood frame around the screen with embedded Lutron lighting, all of which is automated through the ELAN system.”

“Interactive interiors did a phenomenal job of quickly and efficiently installing the ELAN system into the home,” says Ted Thompson, president of Thompson Custom Home Builder. “Sometimes, programmers work for months on end when implementing a smart home infrastructure of this size and magnitude. But the installation process and the system configuration was totally seamless.”

Beyond TV’s, there’s a lot of indoor entertainment. There’s a golf simulator, a bowling ally and more.

“Denny wanted the overall design aesthetic to be clean, simple and contemporary,” Carpenter explains. “In addition to the unique architectural and design elements we incorporated, we also played with technology to achieve our goal. We installed custom-built LED lighting strips across many of the home’s moldings, especially for the home’s art gallery wall.”

“Denny really wanted to be able to control all of the home’s elements without fuss or complication,” Thompson says. “I would absolutely recommend that builders, integrators and homeowners use ELAN when they are looking for seamless control.”

“ELAN ties all of my home’s components together and makes them accessible from anywhere in the world,” Hamlin says. “I couldn’t be happier with how the system turned out.”