Ray Cook: “I’ve spoken to every series that would listen to me.”

Back in December, the droop rule was introduced to Dirt Late Model Racing. Ray Cook announced the rule will go into effect via the Southern Nationals Series.

The droop rule is designed to help aid these cars, preventing rollovers. A chain is hooked from the chassis to the rear end. That will limit the left rear extension. The rear deck height now has a maximum rule of 47″, while fully extended.

Self-sufficient rollovers are a growing trend. Catch a bump in turn 1 of the first heat race and you might roll it all by yourself. Ray Cook is under the impression that the increase in rollovers is due to the never ending reach of the rear deck lid. I happen to agree with him.

Now, Cook has spent the last year and a half attempting to come up with a way to make these cars safer. He’s tried everything. In his words, “This is the only thing that guys haven’t found a way around yet.”

On March 16th, the Southern Nationals hosts their first event. But, will other series adopt this same rule? Are they woking on it? Or, is it under consideration?

Have you heard from other series on implementing the droop rule?

“I’ve spoken to every series that would listen to me,” Ray Cook explained to RacingNews.co.

So, how has it gone over?

“They all like the idea. The unknowns is what everybody’s worried about. They part that we gotta give them a break on is that they haven’t been working on this for a year and half, like I have.”

“They should have been. But, they haven’t been. I’m actually waiting on some of these other series to see what they’re going to do.”

Stan Lester told me he’s considering it for his FASTRAK Racing Series. I don’t think he’d mind me saying that. However, Lester wanted to see how it played out. He was open to the idea but unsure what issues the unknowns would bring. But, there’s other series as well.

“That’s where everybody’s at. I’m in that same position too. The only difference between me and them is I’m just going to try somethin’ that I believe will work.”

I’ve chosen something here that won’t cost us nothin’ to try.

“I don’t like the idea of saying, ‘I don’t know what to do. So, we won’t do nothing.’ I don’t agree with that. I think we need to try something. I’ve chosen something here that won’t cost us nothin’ to try.” 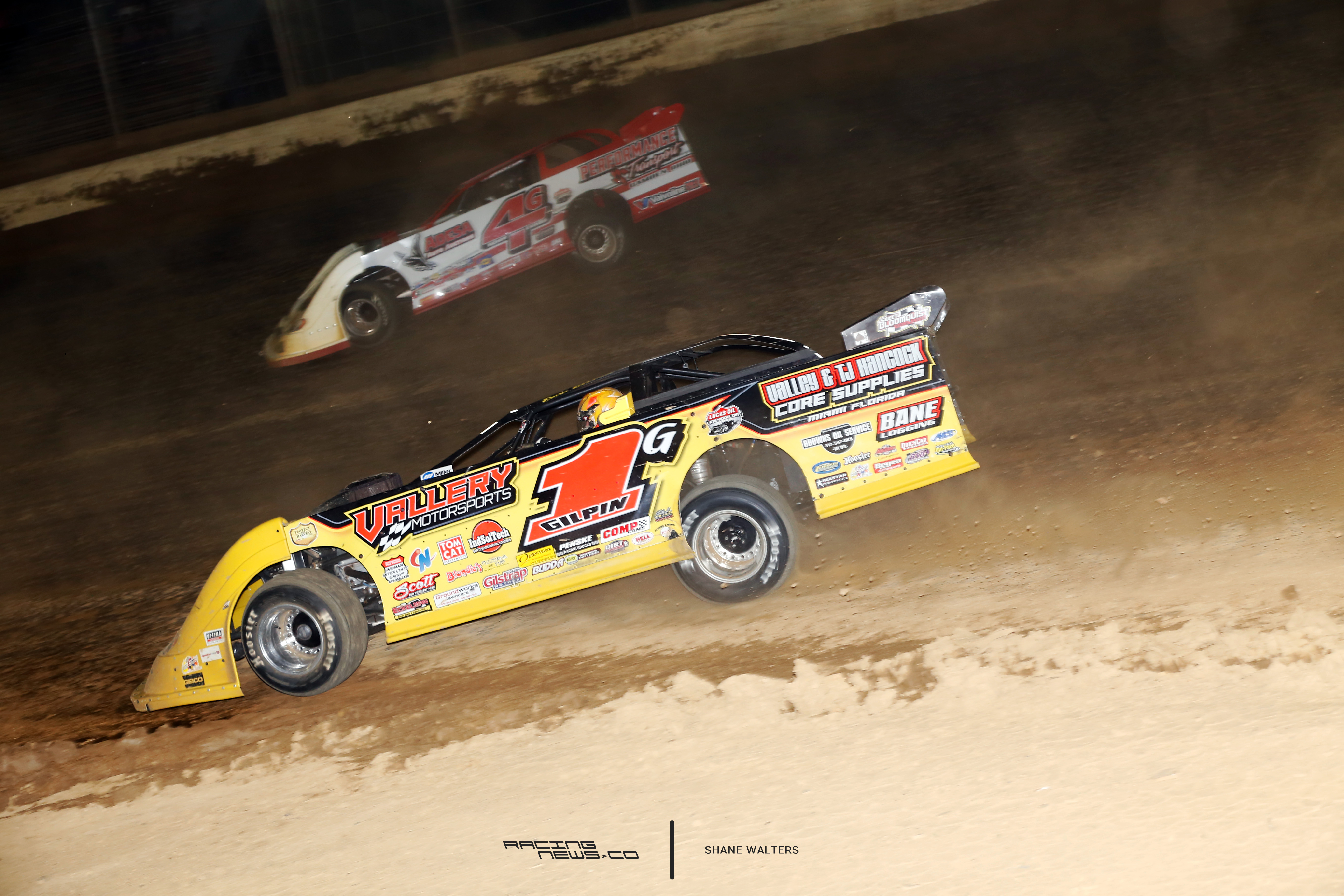 “If it’s costing anybody anything, it’s me. I’ve spent hours on the phone explaining this. The only thing I stand to gain, is satisfaction when I’m running a race. Knowing that I’ve done a little bit to make these cars harder to flip over.”

“I’m not saying cars will never turn over. Be my luck, I’ll probably have three in the first race I go to.”

“I hate to use NASCAR as an example because they do a lot of good stuff. NASCAR was averaging 1-2 people gettin’ killed a year for 3-4 years there. There wasn’t really nothing being done until Earnhardt got killed. Now that we lost our most popular driver — We gotta go in here and re-invent the wheel.”

“And they have done that. It’s been good. I’m very proud of everything they’ve done. The safety walls, the hans devices, the seat. Earnhardt’s death stemmed a whole separate industry of safety.”

“I don’t want somebody losing their life with me knowing I might could’ve done somethin’. Some of the drivers that are hard-headed, they’ll say, ‘We take a chance every time we get in the car.’ Well, we do. You’re exactly right.”

“We also take a chance every time we get in our passenger cars to go to McDonalds. We wanna do all we can to lessen those chances.”

Safety can always be improved.

“Yes. Randy LaJoie, I’ll use him for example. That guy’s done more, just from somebody that makes seats. I’ve seen him push seats out of cars, just using his legs. He’s seen guys that had their seats pop riveted in.”

Randy LaJoie is the founder of The Joie of Seating. The make custom race seats that form to the size, truly custom. Occasionally, he’ll walk up and down the pit area, just to check various safety aspects of racing seats and the way their mounted.

“It’s good because you never know what you’re going to find. I’d a never thought there was a guy pop riveting a seat in. But, we found it. It was in Gaffney, South Carolina.”

“We’ve seen a little bit of everything. Some race track promoters don’t even wanna know. That’s what’s sad. You can ask them, ‘Can Randy come do an inspection?’ They say, ‘Man, I don’t wanna know.’ ”

“After Lucas made a big deal about it. Well, now, how are you going to explain yourself — And you hope this would never happen. But, let’s just say a lawsuit comes up. And you’re a race track that didn’t implement the fire extinguisher rule that Lucas did.”

“How can you say you didn’t know about it? After they plastered it everywhere they did? So, who wants that liability?” And that was a great change that they made. Especially, the automatic aspect.

For those that aren’t aware. The Lucas Oil Late Model Dirt Series mandated a 10 lbs bottle on each race car. Beyond that, the extinguisher is also automatic. So, if there’s a fire it instantly extinguishes. It works like a charm.

“Yeah, I look at this the same way. Who’s gunna say, after all this, that they didn’t know? Unless you’re hiding under a rock somewhere. Everybody knows what the droop rule is.”

“I’ve been in contacts with every series out there, but one. They’re literally just sitting on the fence. I think the wind could blow them either way.”

The Lucas Oil Late Model Dirt Series has a new tech director for 2018. Steve Francis was very vocal about the current state of race car design in an interview with me back in September. One of his biggest peeve’s was the deck height and body width.

5 minutes after that interview, Steve Francis announced to the Knoxville Raceway crowd via the big screen that he was considering retirement. This year, he’s signed a non-compete clause, gone into retirement and currently stands on the side of the rule makers.

Related: “The left rear’s dragging the ground, when you drive threw the pits. But when you go on the racetrack that left rear’s 56 inches in the air.” -Steve Francis

Did you have discussions with Rick?

“I’ll give Rick Schwallie credit. Rick does a great job of investigating every rule, before he puts it in the book. He hasn’t had time to go through and do his own research. He still needs to jack all the cars up and see what those measurements are and need to be. Which I’ve already done.”

“I hope hope that he would take my word for it. But, he’s not going to. He told me that when he goes to Florida, he’s going to use Speedweeks to jack cars up and determine the measurements.”

Not that the rule will go into effect on that side. But, it’s being investigated, as soon as this week. The LOLMDS is planning to jack the cars up in the pit area, just to see what their current measurements are. It’s a test to see where the Lucas cars stand currently, without the rule in place.

“I told him I’d work with him. If he feels my measurements are not correct and we need to meet in the middle somewhere or do something together — I told him I was more than happy to do that.”

That’s good. I think it’s important that series work together with new rules. So, everybody’s not rolling in different directions with varying applications of the same thing.

“I can’t wait for Speedweeks to happen. So, he can gather his information. I’m hoping that he’ll make a decision to get on-board with it after Speedweeks.”

The Lucas Oil Late Model Dirt Series hosts their opening round this week. Their first race is on February 2nd at Golden Isles Speedway. Then, they head to East Bay Raceway followed by Bubba Raceway Park.

Related: Ray Cook on the droop rule, “It’s got a whole list of positives that goes along with it, after the safety aspect”