Dale Earnhardt Jr: “Something weird happened on Saturday and I ended up calling my doctor.”

Dale Earnhardt Jr is in the post-driving portion of his career. The NBC broadcaster doesn’t begin his new role until the Daytona July race.

However, Dale Earnhardt Jr is still a fan of the sport. He still needs to be on top of what’s going on. So, he went to Martinsville Speedway over the weekend.

“Something weird happened on Saturday and I ended up calling my doctor. We went to the race track with Rick Allen and we were walking around and talking. Seeing old friends and having a good time.”

“Then practice started and I was like, ‘Steve, let’s go over to the pit wall in turn 3, right at the entrance to pit road and watch some practice.’ ”

“Steve’s like, ‘Look at the #78 and how smooth his car comes into the corner.’ And I’m looking at it. Just that whole environment, I got real nauseous.”

“So I said, ‘I gotta get away from these cars. I’m too close.’ It reminded me of some of the stuff I was dealing with during my concussion.” 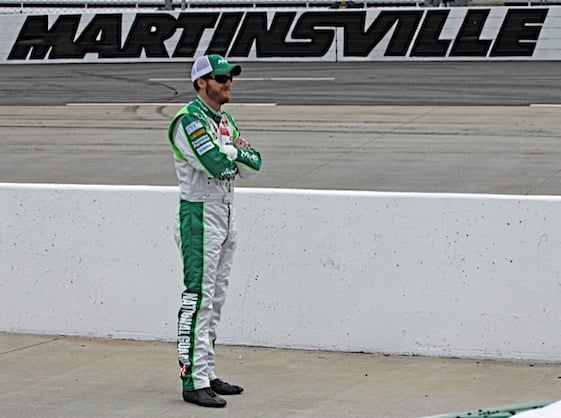 From there, Dale Earnhardt Jr and Steve Letarte relocated to the #13 hauler. Ty Dillon drives that car, his primary sponsor is GIECO Insurance. Dale Earnhardt Jr is still a spokesperson for Nationwide Insurance. That’s a slight conflict that might be pointed out by the NASCAR Reddit police.

“He’s annoyed. So, I go over to the Nationwide #88 hauler. I stood there. It took about 30 minutes for that balance and that nausea to go away.”

“I got real freaked out. Man, something’s wrong with my head. It just reminded me of those symptoms from so many months ago. I’m calling my doctor, soon as I get home.”

Dale Earnhardt Jr suffered multiple concussions throughout his NASCAR racing career. Toward the end, the last one was the toughest. It was too the point where lights and too many people, would make Dale Jr dizzy.

“It was the exact same symptoms I dealt with when I had the vestibular issues.”

“I called my doctor, ‘Hey doc, I had this weird thing happen to me.’ ”

“He’s like, ‘Man, let me tell you a little story about this baseball player I was working with. He had some issues, just similar to yours. He got cleared, called me two years later.’ ”

Dale Earnhardt Jr relayed the story that the baseball player told the same doctor, “He’s like, ‘Doc, I’m freakin’ out. I was on this dock and the waves were going one way and a boat came by going the other way. I about felt like I was going to fall off the damn pier.’ ”

“The doctor explained to me that my vestibular system had never been in that situation before. You know, I thought about it, I’ve never been down in the corner watching cars practice before. Nope. Never have, since I was a little kid.”

“I ain’t done that in years. I’ve been in the car. When I was in the car, I was never standing 25 feet away from them as they practice. That was a real extreme environment to be in and it made me trip out.”

“My doctors like, ‘You know what you should have done as soon as you started feeling better? You should have went right back down there.’ ”

“He used to tell me years ago with my head. I’d get in situations that were complex and I’d get sick. He told me to ‘pull back, get to feeling better and get back in there and do it again. And keep going, stretching it like a muscle. Eventually, you’re going to stand down there, watch them cars go by and it’s not going to bother you.’ ”

“It’s just your brain having to relearn something all over again. When your head heals from something like that, it don’t just mean everything’s going to be fine. Your brain has to kinda relearn to walk, relearn balance. Your balance doesn’t just come back like a memory.”

“We used to do all these excursuses every day. It was so simple and stupid. But, that’s all it was. It was teaching me how to turn my head without getting dizzy.”

Dale Earnhardt Jr was crowned a 15-time Most Popular Driver during his final race in 2017. He came in as a fan favorite and he left as one.

Related: Frank Heckenast Jr had plans to run the Lucas tour in 2018, concussion sidelines his start in 2018

Jack Roush was still upset that Kenseth left in 2012