The #6 program will now be shared between Trevor Bayne and Matt Kenseth. The team doesn’t yet have Matt Kenseth’s full schedule lined up. As of now, the race at Kansas Speedway and the All-Star race are the only two that has been announced.

It’s a move by Roush-Fenway Racing to move their team back in the correct direction. Aside from the wins at the restrictor plate tracks and minor success on short tracks, the team has struggled collectively in recent years.

This year, they can’t really place blame on the manufacture. Yes, the Ford’s have the oldest body shape in the field. However, Stewart-Haas Racing sits at the front of the field with multiple wins already in 2018.

Matt Kenseth has returned to Roush-Fenway Racing with the experience to right the ship.

“There are a number of things on a race car that you can work on. But, you can only fix so many things. Especially at one time. I think having Matt in the car will send them directly to areas that will bare fruit. And not spend a lot of time trying to address some of the ones that might not ever bare fruit.”

“After all, that’s what puts some teams ahead of other teams. It’s not because one team works harder than the other. They all work hard. It’s just which teams work on the things that bare fruit are the ones that migrate to the front.”

Ahead of the 2017 season, Roush Feway Racing was reduced to a two car team. Their #16 charter was sold after the couldn’t find a replacement sponsor and/or driver when another veteran driver, Greg Biffle was let go.

“I feel like they’ve been trending in the right direction,” Matt Kenseth explained. “I feel like our car’s on the upswing. I’ll get in there and get my hands dirty. I’ll try to evaluate what we do good and what we could do better.”

“What I’m looking forward to, is it’s fairly small right now. It’s down to two teams, it’s leaner. I feel like their on the right trajectory. There’s a lot of advantages to where their at right now.”

“This all came together rather quickly. But, I think our hopes are to continue this long term. And getting back to turning the TV on and seeing the Roush cars up front every week.”

Matt Kenseth has been tasked with rebuilding the race car. Or at least, pointing development in the right direction. But, how bad does he want to win?

“I’ve been doing this for a long time. I don’t really feel like I have anything to prove. Anytime you go to the race track, you go there with the idea of trying to win. That’s never going to change as long as I drive.”

“This opportunity is as much about my possible future role than it is just the driving. If it was just strictly about driving, I probably would have been at Daytona. It’s more about the rest of it. Coming here, trying to help. Coming to see what the farther out future looks like for me. If it’s something I’m good at, just trying to help in the shop.”

“It’s smaller than it once was. I feel like I can be a real asset, in a lot of ways besides just driving.”

Trevor Bayne took the news just as you would expect. He wants to be in that car full-time. Yet, Bayne sits 3rd on the winless streak chart of active drivers. His last win came at Daytona in 2011.

Bayne hasn’t spoken to Kenseth since the discussions and now the announcement has come out.

“I have not spoken to Trevor yet. I was going to give that a week or two to settle down. My hope is that we can get together sooner rather than later and sit and have a long talk. I really feel like there’s a couple things I could probably help him with. My hope is that he embraces that and turns it into something to drive him and get better.” 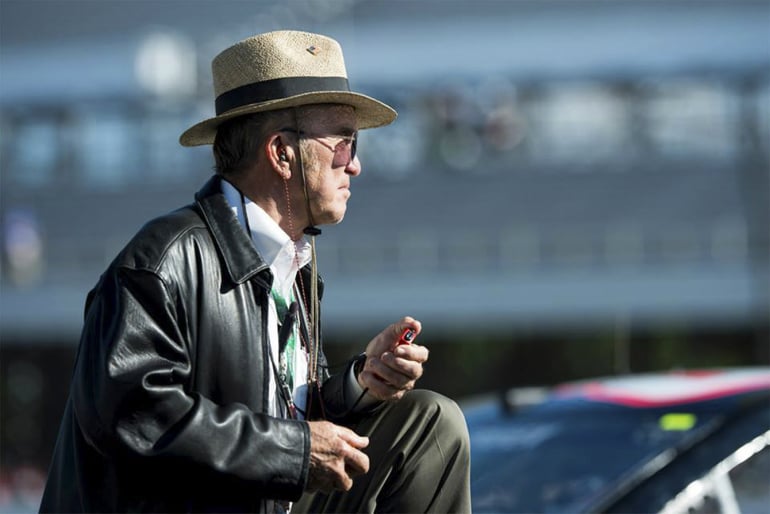 “We think Matt will give us a chance to mentor some of our drivers. The young rookie drivers and also Trevor and Ricky. The benefit of his experience. Some of which was passed to him from Mark. Thanks to Matt and thanks to Mark.”

“I look forward to the future. We’re gonna make our team and our race cars great again.”

The focus is on making the operation better. Matt Kenseth has 650 races in the NASCAR Cup Series alone. Of those, he’s collected 39 wins and 327 top 10’s. And winning his second to last race, there’s still more in the tank.

“Why is Mark here and why is Matt here?,” Roush asks himself. “They were the best two guys in really finding the speed in our cars. These stock cars are not very easy to drive. They do 3-4 things that would drive a professional driver to have tears. There’s 3-4 things that they do every lap that you want to fix. There’s 1-2 of them that you can address to find speed in the car.”

“There are the best two drivers of the 50 drivers we’ve worked with in NASCAR, to find the speed in the cars. To both make the recommendations to the team, for hardware changes. And for the things behind the steering wheel to bring the attention to the crew chief.”

Is this a move to go out and win or to evaluate your cars and see where you’re at?

“It’s all of that,” the team owner continued. “It’s a chance to look at our cars and see if there’s something glaring. That Matt would see from his experience.”

“Whether there’s another championship in there for Matt with Roush-Fenway… That remains to be seen. That’s in years 2 and 3 out. If there is a year two and three for Matt in the car. We’ll just have to see how it goes.”

“Mark and Matt, they don’t care who they yell at to get what they want. I’ve been taken to the woodshed with both of them at certain times and it didn’t turn out in my favor.”

Related: Jack Roush was still upset that Kenseth left in 2012

Related: Post-retirement Kenseth says, “I can’t envision myself at the race track”

Jack Roush was still upset that Kenseth left in 2012

NEXT POST
Coca-Cola to be featured as primary sponsor on No. 3 Chevy for the Coke 600