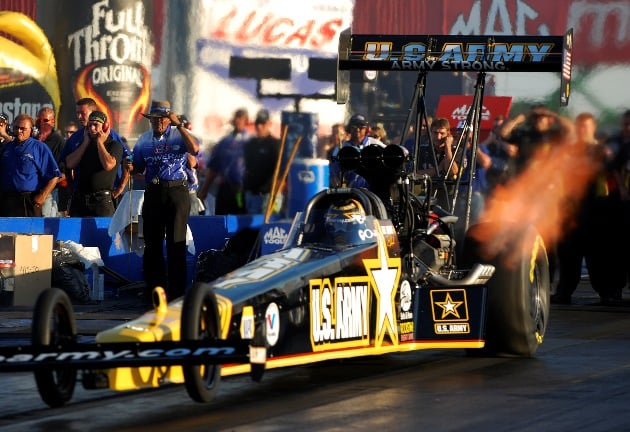 CLERMONT, Ind. — Tony Schumacher raced to his record ninth Top Fuel victory in the U.S. Nationals on Sunday, beating Spencer Massey with a run of 3.806 seconds at 315.34 mph in the rain-delayed NHRA event.

“He came from a different time,” Schumacher said about Garlits. “All we do now is drive the car. When he was racing, he drove the car, built it, prepared it and innovated new ideas.”

Schumacher said his goal for the final was simple, because neither lane appeared to offer an advantage.

“You run your best when you’re relaxed,” he said. “When I came here, I said, `I’m just going to let the car roll in and do what everybody else does. My goal for the day was to leave on everybody, and I did that.”

Both drivers are solidly in the NHRA’s Countdown to the Championship, which begins Sept. 14-16 at Charlotte. With 1,378 points, Massey is second behind Antron Brown (1,413). Schumacher is third at 1,321.

Enders advanced to the countdown as the fourth seed with 1,172 points, while Connolly failed to qualify as one of the top 10. Allen Johnson is the top seed in Pro Stock with 1,492 points, with Jason Line second at 1,332 and Greg Anderson third with 1,309.

Hines gave Harley-Davidson its first Nationals championship by finishing in 6.937 at 191.70 in the final against Hector Arana. With 985 points, Hines is the second seed to Eddie Krawiec, who has 1,040. Hector Arana, Jr., is third with 838, with his father, Hector Arana, fourth at 733.

The final two rounds of qualifying and the final eliminations were postponed a week when the remnants of Hurricane Isaac swamped the area.

Written By: The Associated Press