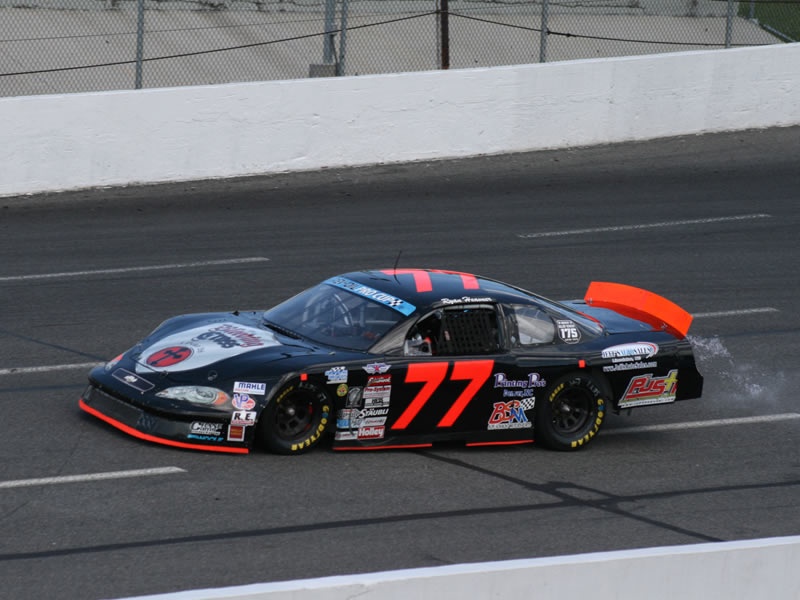 The entire team, suffering from a loss, wanted nothing more than to return to the track. A few weeks prior to this event sixteen-year-old Dillon Schacht, a relative of team own Bob Schacht was killed during a motorcross practice. The number 77 machine wore a sticker in his honor.

Heavner entered the racing surface for practice. Driver and crew worked on the car all day fighting a tight in the center condition. Despite, the handling issues Heavner still had the car floating inside the top ten on the practice sheets. However, they felt the race set-up would excel the qualifying trim.

The number 77 team crossed the line to begin the qualifying run. An entire field of Pro Cup drivers found themselves separated by three tenths of a second. Post qualifying, as the complex settled back into tranquility from the lack of 700+ hp engines, Heavner found himself placed eleventh of the starting grid.

The grid, set for two-hundred-fifty laps around the slightly banked .416 mile oval took the green flag, kicking off the first one-hundred-twenty-five lap segment. Patience was key, Ryan Heavner progressively worked his car through the pro cup field. As the halfway mark was reached Heavner landed in the eighth position.

During the mandatory pit stop several adjustments were made in hopes of a further advance toward the front of the pack. Picking up where drivers left of the racing surface, Heavner would begin his charge from the eighth position. Following a team effort Ryan Heavner circled the remaining one-hundred-twenty-five laps and picked up an additional two spots, crossing the finish line just outside the top five in the sixth position.

Heavner said, “I am extremely thankful each time I receive the opportunity to climb in a race-car.” Ryan added, “Each time is a learning experience, giving me knowledge that hopefully helps me in the future.”

Ryan would really like to Thank Jeff’s Auto Sales, Noblot Jewlers (The Bleeding Cross), Times, and his Mom and Dad for believing in him and supporting what he does.

The next race will be a local one for the Lincolnton, North Carolina driver. Bob Schacht Motorsports will return to the semi-banked .363 mile Hickory Motor Speedway. Heavner hopes this stop will draw the best results for a number of reasons including it being his last race on the 2012 tour.

Stay tuned to the Ryan Heavner Racing website for press features, race results as well as on and off track photos. Point your browsers to http://www.RyanHeavner.com to check in on the happenings within the team.

Ryan Heavner would like to thank all of the team partners that helped him achieve a place on the grid following the Rev-Oil Pro Cup Series. These include; Jeff’s Auto Sales, Noblot Jewelers (The Bleeding Cross), Times Oil Corporation, Printing Pro, LJ DeZigns and Walters Web Design.