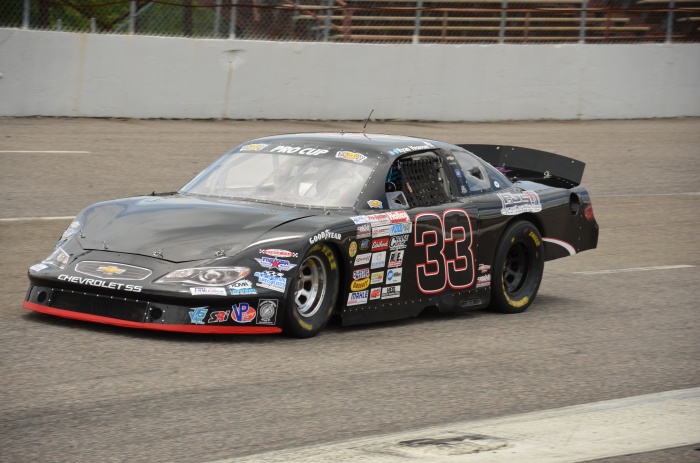 JUNE 26TH, 2013 (ST. LOUIS, MO) Ryan Heavner Racing unloaded their Pro Cup Series hauler in Myrtle Beach, SC over the weekend. The half mile speedway is a favorable stop on the tour for Heavner and crew as he has grabbed several great finishes on semi-banked oval. This time however, the team would unload for nothing but heartbreak.

Heavner started the night from the 12th position with an uphill battle ahead. As the green flag dropped, Heavner immediately went into tire conservation mode. Experience at the speedway has proven the track surface to be brutal on tires. The plan to attack the track later on in the race would prove effective.

As the field inched closer to the halfway mark, Heavner began putting more power to the gas pedal. As other drivers began losing traction on worn out rubber, Heavner pushed forward through the field. He finished the first half in the 6th position.

After a pill draw, inverting the top half of the field, Ryan Heavner would start from the 3rd position. He wouldn’t stay there long, quickly passing Clay Rogers, grabbing the lead and running into clear race track.

As Heavner began lapping the field he would struggle for several laps to get around Tyler Young, who was battling for the lead earlier in the race. Finally, Heavner was able to make the move. Shorty thereafter a caution came out for debris on the race track. Heavner reported, “No debris.” Invisible debris or not, Heavner was hit with a road block as the yellow flag was dropped on the field.

As the field restarted, it appeared Rogers spun his tires or he just had an unfavorable restart and Heavner regained his gap on the field. Suddenly, everything went wrong as Heavner was black flagged for jumping the restart. The leader is given the responsibility of starting the race from within the perimeters of the restart box. Heavner did just that and the flagman reciprocated the green flag. However, with just 57 laps to go the Pro Cup Series officials called him to the pits, after he refused the black flag and continued to pull away from the field.

Discouraged, the team is currently unsure of future racing plans. They are hard at work putting things together for an ARCA Racing Series run in 2014.

Ryan would also like to thank Wes Gonder along with his dad who worked tirelessly to make this race possible after hundreds of shop hours. Ryan stated, “We will continue to P.U.S.H. (Pray Until Something Happens), because we believe that our luck will eventually go our way.”

To learn more about sponsorship opportunities with Ryan Heavner Racing, please visit the contact page of the new website. They would be happy to explain in detail how motorsports marketing can benefit your business.

Stay tuned to the teams social media pages and website throughout the racing season to receive up to the minute updates. The team website will be updated regularly with event changes and race results. Be sure to visit the photo albums as well for any race fans entertainment purposes.

About Ryan Heavner Racing
Ryan Heavner currently competes in the CARS X-1R Pro Cup Series. In 2011, he was a competitor in the ARCA Racing Series and looks to return to that division of competition soon. Ryan Heavner formed the PUSH foundation in 2012 with plans to spread his message. Ryan’s racing career and accomplishments began when he was 5 and through “Praying Until Something Happens he has established priorities for what has been a successful and valuable new ministry.