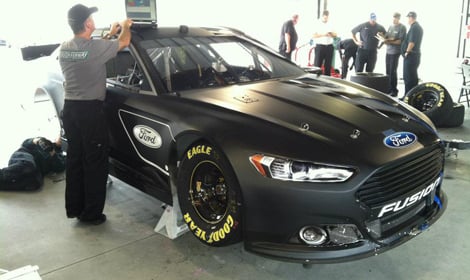 DEARBORN, Mich., October 1, 2012 – While advances in computer simulation models and wind tunnel technology have given race teams the ability to predict what conditions they may encounter on any given weekend, there’s no real substitute for actual on-track testing.

As the countdown towards February’s Daytona 500 and debut of the 2013 NASCAR Fusion continues, Ford Racing is in the midst of an intense track testing program to gain a better understanding of the new car’s characteristics.

“We have full data acquisition systems on the car to measure things like ride heights and air-flow, so we know what all of the tires are doing as well as what the air-flow through the radiator and the brake ducts is like, so it’s your basic instrumentation system taken to the next level. It’s no different than the computer on your car, except we’re only allowed to use it during tests.”

For those like Eddie Wood, who has been around NASCAR his entire life as part of the famous No. 21 Wood Brothers Racing team, all of these new high-tech devices have changed the sport.

“I can remember going to test just 10 years ago and you would have a little bit of data acquisition on the car, but nothing like they have now,” said Wood. “They can check everything to the driver’s heartbeat. It’s so technical, but that’s the age that we live in. Everything is like that now, but it’s all good. It costs a lot more to test than it did 10 years ago, but it’s all relative.”

While wind tunnel testing plays a crucial part in understanding the aerodynamic characteristics a car will display at 200 miles per hour, there’s nothing like getting out and experiencing it all under real conditions.

“It’s not a controlled environment out here at the race track like it is at the wind tunnel, so you definitely have the sun and the heat in the track and the extra rubber actually comes into play as you’re trying to get your car tuned for the race that weekend,” said Chad Norris, crew chief for driver Carl Edwards at Roush Fenway Racing. “We always come to a test with way more stuff than we can ever get done because of the limited testing, so there’s definitely a big pile and we try to whittle it down to a smaller one.

“At the end of the day, we always wish we had another day so it’s one of those things,” continued Norris. “We try to hit the generic things on the front side of the test and then start fine-tuning on the back side. Hopefully, we bring our best package that we learn from here when we go back to the race.”

And while a handful of engineers and computers methodically document what the car is doing on every lap, there’s still no substitute for the driver, who sits behind the wheel and can provide instant analysis about how the car is reacting.

“The engineers will tell you the driver isn’t important at all during testing, but I like to think I’m important,” mused Edwards. “At the end of the day, we have all of this data acquisition and you have all these guys working on things, but putting the rubber on the race track, having this car out there on the track, and getting driver feedback is what we’re going to do at the races, so it’s really important to do that here. They let me think that my suggestions go somewhere and hopefully they do.”

Norris agrees, saying, “The driver is still very important. At the end of the day we’ve got to make him comfortable and be able to get the speed out of it, so he’s still very important. One of the data acquisition tools we have is able to back up what he’s saying, so there are a couple different angles as to how we can look at a particular problem and try to decipher it based on what he’s saying.”

So as testing continues for the 2013 NASCAR Fusion over the next few months there is still much to learn, but it appears this new car is off to a good start.

“I think everyone has worked together very well and built this Fusion so we can go out there and beat these other manufacturers and these other teams,” said Edwards. “Everybody in our Roush Fenway camp is excited about 2013.”