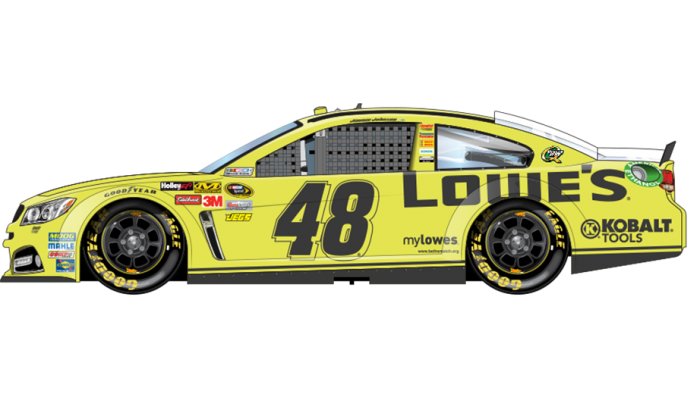 Daytona Speedweeks kicks off with The Sprint Unlimited, formerly known as the Budweiser Shootout. As in past years, teams run special paint schemes for this non-points event. The first event of the year, race entry is limited to those who won poles in 2012 and previous winners of the race.

Jimmie Johnson’s No. 48 Lowe’s Yellow Chevrolet, in particular, has some interesting background.

• The “Daytona Yellow” paint formulation was used by Chevrolet on its Camaro and Corvette models in 1969 and 1970.

• The paint code of Daytona Yellow was used on several General Motors Corp. and Chrysler models (including the Firebird, Pontiac, Camaro, Corvette, Chrysler Special Order/Fleet, Oldsmobile, Chevrolet, Nova, Buick and GMC.), but the sales name of the color changed based on which car it was used on.

• The only instances in which it was called “Daytona Yellow” by the factory was on the ’69 and ’70 Camaros and Corvettes.

Below are paint schemes for 11 additional cars in the 19-car race.