View the photo preview below of the 2016 NASCAR Trading Cards featuring many of the most popular NASCAR Sprint Cup Series drivers. The cards are part of the Torque NASCAR Racing set by Panini America.

Now that 2016 Prizm NASCAR Racing, Panini America’s history-making first NASCAR-licensed product, has had a week to resonate with collectors across North America, it’s safe to say that the company’s off to a fast start in the racing marketplace. But things will speed up just a bit when Panini America’s second NASCAR release, 2016 Torque NASCAR Racing, arrives on the last day of August.

To be sure, Torque will shift gears into more super-premium territory with each hobby box (10 cards per pack, five packs per box, eight boxes per inner case, two inner cases per master case) delivering five hits, including at least three autographs and two memorabilia cards.

The highlights of 2016 Torque NASCAR Racing are many and include . . . 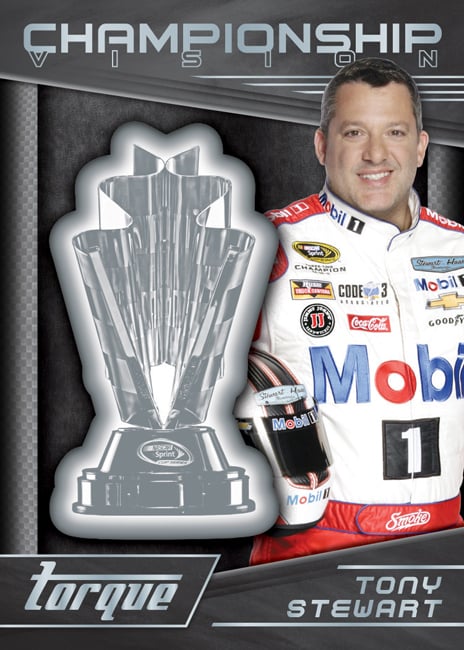 -Look for oversized patches teamed with autographs from some of the hottest drivers in the sport in the Jumbo Patch Signatures insert.

-The unique Championship Vision insert features die-cut championship trophies printed on acetate along with a holographic-framed border. The chase includes drivers who have previously won championships.

-Panini America’s vaunted art-card concept finally comes to racing with the Race Kings insert leading off with “The King” himself, Richard Petty. These cards follow the fabled Diamond Kings heritage with a distinct painted look.

We’ll have plenty more on Torque NASCAR Racing and the 2016 NASCAR Trading Cards in the coming days right here on The Knight’s Lance. But until then, enjoy this extended sneak peek:

Actual images used on cards to be determined.