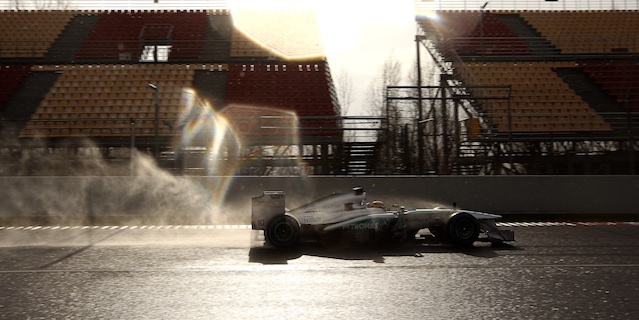 Lewis Hamilton put Mercedes back on top of the timesheets in Barcelona on Saturday in the penultimate day of pre-season testing at the Circuit de Catalunya. With weather conditions much improved on Friday’s, Hamilton set his fastest lap in the morning session as he worked through a series of short runs on Pirelli’s soft tyres.

On his final day of testing before making his Mercedes race debut in Australia later this month, the former champion completed 117 laps, equivalent to 545 kilometres, to take his total pre-season mileage in the F1 W04 to 2,585 kilometres.

“The reliability, the mileage and the step-by-step improvements that we have achieved during the three tests are all very encouraging,” said Hamilton. “Whilst we’ve been focusing on our own performance, we definitely haven’t seen the full potential of our competitors yet, so it’s difficult to predict where we might be. I’ll be back at the factory next week doing some final preparation work on the simulator and with my engineers, and then it’s off to Melbourne for the first race of the new season with my new team.”

Ferrari’s Felipe Massa – also enjoying his last day of pre-season testing – improved in the afternoon to climb to second, but ultimately finished more than half a second off Hamilton’s best. After a positive day of development work with the F138, Massa was forced to curtail his running slightly early due to a problem with the left-front suspension upright.

The Force India of Adrian Sutil was an impressive third, while Williams were highly encouraged by Pastor Maldonado’s and Valtteri Bottas’s fourth and fifth places respectively, as the team debuted the updated core bodywork which they plan to race on the FW35 in Australia.

“I could really feel the difference today running the updated bodywork,” said Bottas. “We saw some improvements immediately but we still need to work on the car balance to maximise the potential. Overall, we learnt a lot and it’s nice to see the work everyone has been doing at the factory having a positive influence on the car. It’s now up to us to get the lap time out of it.”

Sauber’s Esteban Gutierrez was sixth, as the Swiss team looked to run their Mexican rookie through a full qualifying and race simulation ahead of his Grand Prix debut in Australia.

“It was an interesting experience,” said Gutierrez. “The understanding of the tyres was a very important point, especially here in Barcelona where we know graining of the front tyres is a big issue. However, we were able to manage the degradation of the tyres quite well. Unfortunately we were not able to complete the race simulation due to a suspected water leak.”

Mark Webber was seventh for Red Bull, with Sergio Perez eighth on his final day in McLaren’s MP4-28 before Melbourne. Perez’s morning was devoted to evaluating a number of different mechanical set-ups. The team then committed to a series of system changes over the lunch break before kicking off with a long run in the afternoon, as well as some live pit-stop practice.

Jean-Eric Vergne was back behind the wheel for Toro Rosso and finished the day ninth, the Italian team focussing on suspension settings in the morning and a full race simulation – over which the STR8 ran trouble-free – in the afternoon.

With Kimi Raikkonen sidelined at the last minute with suspected food poisoning, Lotus had third driver Davide Valsecchi on track in the morning, and a recalled Romain Grosjean in the afternoon. They finished the day in tenth and 11th spots, with Grosjean just edging out the 2012 GP2 champion in the timesheets.

“This morning was quite a rush to get everything ready as the call only came late, but the team were fantastic getting the car prepared for me,” said Valsecchi, who ran 16 laps of familiarisation and exhaust/aero assessments. “I only completed short runs today so I have a limited impression of the E21, however it’s clear that it’s a very good racing car.

“For me to be able to get immediately on the pace means that the car is certainly fast and competitive. It was a fantastic opportunity; I sat in the seat of a former world champion so I knew that I’d be fast for sure.”

Marussia’s new race signing Jules Bianchi took 12th place as he got his first taste of the team’s MR02 machine. Meanwhile, Caterham’s Giedo van der Garde may have finished last on the timesheet, but the Dutchman was the day’s busiest driver, completing a mammoth 126 laps in the CT03.

“We took full advantage of the weather today, running through the final tyre and set-up evaluations this morning and then running a full race simulation after lunch,” he said. “We only had one minor issue with the car this morning, but apart from that it ran well all day and it was good to get a full race distance done, both for me and the whole team.”

Testing concludes at the Circuit de Catalunya on Sunday.