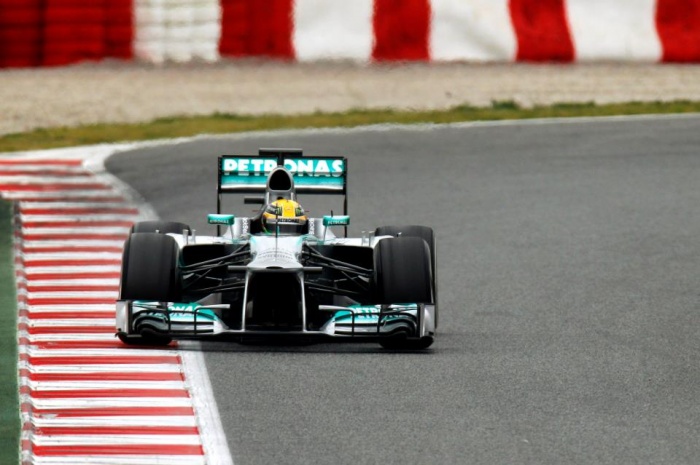 Lewis Hamilton set the pace for Mercedes as the second pre-season test of 2013 drew to a close in Barcelona amid damp conditions on Friday.

Heavy downpours resulted in the first two hours of running being blighted by red flags as drivers struggled to keep their cars on the slippery circuit. However, track conditions soon improved and, in a flurry of activity before lunch, Hamilton leapt to the top of the timesheets with a short run on medium-compound tyres.

Sadly for the teams, the rain returned after lunch meaning that none of the drivers was able to better his time in the afternoon session and any meaningful running was severely limited.

“The conditions today meant that we didn’t complete as many laps we would have done in the dry but we have gone through the test items that we wanted to achieve this week,” said Hamilton.

“We have been working on our consistency over long runs and we managed one run this morning on dry tyres; the car felt okay but the conditions were also very cool, so we cannot draw too many conclusions.”

Hamilton’s former team mate Jenson Button ended up with the second-quickest time of the day for McLaren, with Toro Rosso’s Jean-Eric Vergne in third.

“Another productive day, even with the rain,” said an upbeat Vergne. “We had many things to test, especially on the aero side and I feel we got some good answers.

“Later, it was useful for me to drive on the extreme and intermediate Pirellis and I got a good understanding of how they behave, even if the conditions were extremely cold, so it was actually surprising we had rain and not snow! Now I am looking forward to the final test, which will be very important for everyone.”

Jules Bianchi did his chances of landing the second seat at Force India no harm by ending the day in fourth place, whilst Esteban Gutierrez – one of several drivers to end up in the gravel in the morning – clocked the fourth-fastest time for Sauber.

“For me it was the very first time I had driven a Formula One car in the wet,” said Gutierrez. “It was particularly interesting in the morning, when the track was wet to begin with and then started to dry out.

“I was able to drive with dry tyres in very tricky conditions, which was a situation I could experience in a race. It was important for me to feel this change in conditions. In the afternoon I got the opportunity to compare the intermediate tyres with the full wets. I learned so much today. This was just what I needed.”

Behind Gutierrez, Giedo van der Garde took advantage of the conditions to deliver Caterham’s best position on the timesheets in testing so far.

“Despite today’s weather it’s been another relatively productive day,” said the Dutchman. “It’s certainly been one of the coldest days I’ve had on track, but even with the cold track temps and the rain that stopped and started we were able to get through quite a bit of work.

“The cold weather meant it might not have been much fun for the fans in the stands, but it was useful to get some laps done on the intermediate tyres as it was my first time in an F1 car in the wet, and to experience the car in the wet/dry conditions we had today.

“We also tried a couple more ideas to help improve the rear stability but, again, as the tyres weren’t really coming up to temperature we weren’t able to push too hard today.”

Williams were the only team not to set a time on Friday, preferring, as they had their full race team with them, to focus on pit-stop practice instead.

“Despite the weather we were able to achieve a lot,” said Valtteri Bottas, who drove the FW35 in the morning session before handing over to team mate Pastor Maldonado in the afternoon.

“The key things to work on as a driver are braking as late as possible for the pit-lane speed limit to minimise the time lost, perfecting your positioning in the box and finally pulling away quickly and cleanly.

“It’s really interesting as there are a lot of things to think about, but the better I get, the more trust you build with the pit crew which means they are able to react even quicker. We’ll be doing a few more at the next test but then I feel I will be ready for Melbourne when it comes to pitstops.”

The third and final pre-season test of 2013 runs from February 28-March 3 at the Circuit de Catalunya in Barcelona, Spain.