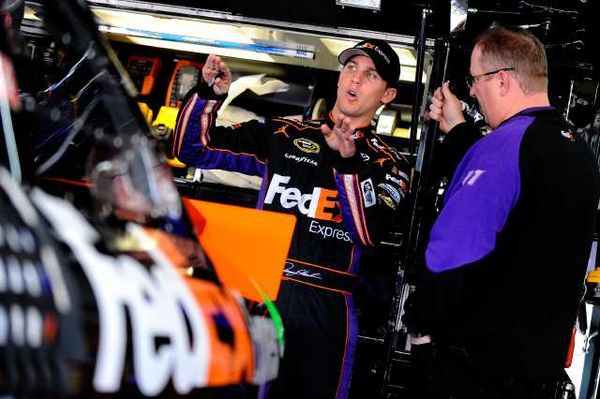 Denny Hamlin Update: Vickers expected to finish, but Hamlin would get points

Denny Hamlin says he will be back in a race car Sunday at Talladega Superspeedway — if only to start the event.

The Joe Gibbs Racing driver, out since suffering a compression fracture in a lower back vertebra in a crash March 24 at Auto Club Speedway, wrote Tuesday on Twitter that he had been cleared to start Sunday’sNASCAR Sprint Cup Series event on the 2.66-mile track. He’s then expected to turn his No. 11 car over toBrian Vickers, who has been driving the vehicle in his absence, and who will finish the race.

But by starting, Hamlin will get credit for whatever driver points are accumulated in the event — which will bolster his hopes of contending for the Chase for the NASCAR Sprint Cup. Hamlin needs to be inside the top 20 in points to be eligible for a Wild Card spot in the playoff, and he currently stands 28th after sitting out the past four events. He enters Talladega 71 points behind 20th-place Kurt Busch.

“I can not wait to get back in the car,” Hamlin wrote on Twitter. “The smell of fuel and tires. Ahh.”

Hamlin was injured racing with Joey Logano for the victory on the final lap at Fontana, Calif., where — after contact between the two cars — he slammed head-on into an inside wall not covered by the SAFER barrier. NASCAR has since said it will have outside experts examine that area of the 2-mile race track and recommend any changes if necessary. Hamlin spent one night in a Southern California hospital, and was diagnosed with a fracture in a lumbar vertebra that doctors estimated would take six weeks to heal.

Hamlin held out hope of returning sooner than expected to compete in last weekend’s event at Richmond, his hometown race track, but doctors nixed that idea after viewing his most recent scan.

“Obviously, my injury is very, very hard because there is no exact science to the risk,” Hamlin said at Richmond. “No one knows what the risk will be if I race this week or if I race two weeks from now. Bone healing is completely subjective. It takes bone healing a year most times to be 100 percent, so how do you quantify how much more risk is there this week versus two weeks down the road or three weeks down the road or two months down the road, so that’s the tough part of it. Everyone is erring on the cautious side because no one ultimately wants to be responsible and have their name on the line of clearing a driver and then he goes out and gets hurt.”

Hamlin has said for the past two weeks that his hope was to start the race at Talladega, a big track where he could likely pull onto pit road and get out of the car without losing a lap. His target for a full return has been the May 11 race at Darlington. There was no immediate indication Tuesday from either Hamlin or his JGR team that he would be able to go the full distance in that event.

Denny Hamlin Update: If Hamlin’s recovery extends beyond Darlington, though, he would have to re-evaluate his return.

“Obviously, if it goes past Darlington our chances are crushed even harder,” he said at Richmond. “Eventually you have to have a shutdown point of not going out there and racing for nothing at a point. I think a recovery on the kind of surgery that I would like to have is about a month-and-a-half or so — I could potentially come back maybe for the tail end of the year. I don’t think anything would be season-ending, I guess you could say. Eventually you have to know the point at which you’re looking at improbabilities of making the Chase and just being smart about it.”

Talladega rules update ahead of qualifying