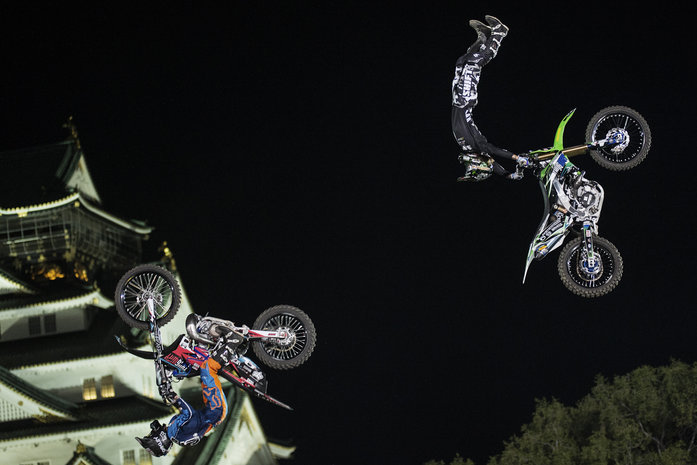 The Red Bull X-Fighters are a group of freestyle motocross riders, here is a recent clip and photos from the 2013 tour.

These photos are from a trip to Japan. Bikes fly through the air in front of famous Japanese architecture, be sure to check out the full photo album below.

Check out the action video clip from the biggest and most amazing Red Bull X-Fighters event of the year to hit Azerbaijan. A fabulous and exciting freestyle motocross by professional riders took place in Baku, Azerbaijan. Azerbaijan inhabitants were impressed and enchanted by brilliant performances by Aleksey Kolesnikov (Russia), Daniel Bodin (Sweden), Ivan Zucconi (Italy) and Vanni Oddera (Italy).

Created back in 2001, the Red Bull X-Fighters concept has grown to become the biggest and most respected freestyle motocross tour on the planet, featuring the world’s best riders throwing down mad tricks in stunning locations across the globe. The best FMX riders in the world are set to step it up once again and push the sport forward as they visit brand new locations and bring the sport of freestyle motocross to new countries around the globe.

Already in 2001, the Red Bull X-Fighters set new standards on an international level. Since then, top stars in the scene have queued up for starting places at this event and rookies like Maikel Melero were brought to light with the help of this series. Nate Adams (USA), Robbie Maddison (AUS), Andre Villa (NOR), Dany Torres (ESP), Levi Sherwood (NZL) and many more have fascinated hundreds of thousands of fans so far at large bullfighting arenas in Mexico (Mexico City) and Spain (Valencia and Madrid), at the Sphinx of Giza (EGY), the Red Square in Moscow (RUS) as well as in the Brazilian capital Brasilia & the metropolis Rio de Janeiro (BRA) or in the Eternal City of Rome (ITA).

Of all the forms a stock Motocross bike can take, an FMX Red Bull X-Fighters bike is possibly the simplest in terms of modifications. While a lot of Pro-Riders are now switching to 4-Stroke bikes, all of them have been successful with a “Classic” 250cc 2-Stroke bike over the last decade. Robbie Maddison took his Yamaha YZ250 to show you the most important adjustments.