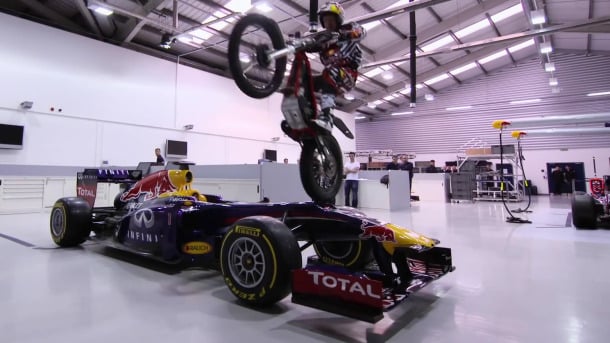 Dougie Lampkin a twelve times FIM Trial World Champion and biking legend has been up to his old tricks once again, but on this occasion he chose to invade some very different working space to showcase his two wheel skills. Lampkin who remains Red Bull’s longest serving athlete of any kind in the UK needed no second invitation when the phone call came in from Infiniti Red Bull Racing to visit their Milton Keynes headquarters.

However when the F1 team extended their kind invite perhaps they were unaware that Dougie had every intention of arriving at their state of the art factory facility armed with his two stroke Gas Gas machine. Having previously visited the site late last year ‘unarmed’, Lampkin was not going to make the same mistake twice and this time came equipped to do battle with various opportunities he had already identified as being an ideal playground for the thirty-seven year old.

With a licence to roam Dougie Lampkin set about exploring the many different departments that have pulled together in recent seasons to dominate F1 in much the same way that Lampkin did at the height of his career. The large contingent of Milton Keynes based workers looked on in amazement as Dougie wheelied and rode through their offices, canteen, extensive workshops, in and out of their autoclave oven and even onto the roof of the team’s highly distinctive race transporters during his day.

Speaking about this unique and privileged opportunity Dougie Lampkin, who is currently in the midst of his final preparations to defend his Scottish Six Days Trial title next week, said the following. “My time as a Red Bull athlete has been a long and varied one and with some incredible moments, with the recent visit to Red Bull Racing being amongst one of my highlights. It’s not everyday you get a call to say ‘how about coming and riding your bike around our F1 factory’, so apart from finding a suitable date the answer was an immediate and very loud yes!”

Dougie Lampkin went on to explain. “I have been lucky enough to perform at the team’s championship winning party in more recent years, and I also had the chance to visit the factory, although only on foot late in 2012. However the plan for this latest project started when I took the unexpected chance to visit the team whilst they were testing in Barcelona earlier this season when I just happened to be at the Gas Gas factory at the same time.”

“Whilst I was at the test I was lucky enough to meet Mark Webber and many of the team. Although I knew Mark was a big bike fan with him having visited the TT, I didn’t realise just how much he likes trials too. It was a shame that Mark’s schedule didn’t allow him to be at the factory the day we filmed, as I would have loved to have jumped over him as well as his car!” Ended Dougie Lampkin with a large smile.

Dougie Lampkin a 12-times World Trials Champion and UK Red Bull athlete came to play at the Red Bull Racing Factory. As well as driving through offices, upstairs and riding on transporters, he jumped a Formula One Car on two wheels. Here’s what happened…