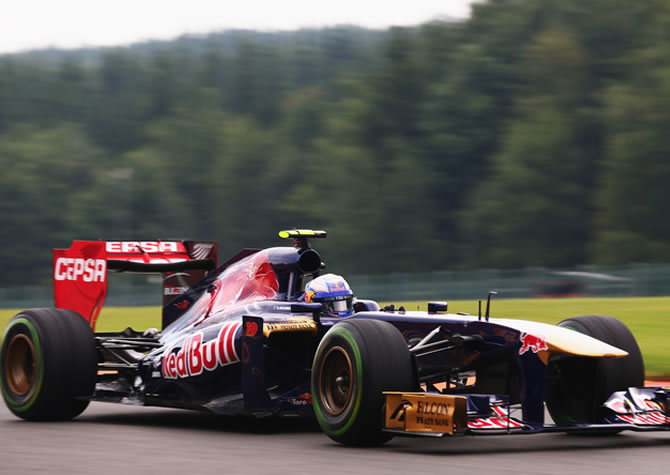 Daniel Ricciardo to Red Bull Racing. A mischievous Mark Webber on Sunday gave away the name of his successor at Red Bull.

While the frenzied ‘silly season’ rumour-mongers wonder if Kimi Raikkonen, Jenson Button or even Fernando Alonso might still be in the running, Australian Webber said it is his younger compatriot who has secured the plum 2014 seat.

Team boss Christian Horner has insisted all weekend that a decision has not been made, and that an announcement is not due at least until Monza in two weeks.

But the Le Mans-bound Webber said at Spa-Francorchamps: “The decision’s made. We all know who it is. I’m happy with that decision.

( Daniel Ricciardo To Red Bull Racing ) “It’s good for him and good for Australia,” he told Channel 10.

Position: 10th
“It was nice to get that point! We ran a long first stint on the Hards and I think that helped us build a good base to have a strong pace in the final stints on the Medium. I felt much more comfortable on the Option tyre and that’s when my race really started. With the last set of tyres I was knocking out maybe ten or so qualifying laps and managed to pick off some cars in front to bring home that crucial point. We knew we had to move on from yesterday. I had said that starting where we were, getting in the points would be good, so I’m happy with that and with the pace we showed while fighting to get there.”

Franz Tost: “Normally, we would not be happy with a single point for tenth place, but given how things went in qualifying, today we can be relieved that both drivers and the team did a good job to recover, with Daniel going from nineteenth to tenth and Jean-Eric from eighteenth to twelfth. It was always going to be a difficult Sunday, especially as the rain which could have helped us never arrived. But both cars were fast enough to work their way through a large part of the mid field and Daniel and Jean-Eric produced some exciting passing moves to get back in the points zone. We ran different strategies, to try and make the most of any opportunity, with Daniel starting on the Hard tyre and running a longer first stint and, by the final stages this proved to be slightly quicker than Jev’s, although they both made two stops. The most positive aspect of today’s performance is that our pace seems to be back at the relative level we had earlier this season. We are now looking forward to a competitive performance in our home race in Monza.”