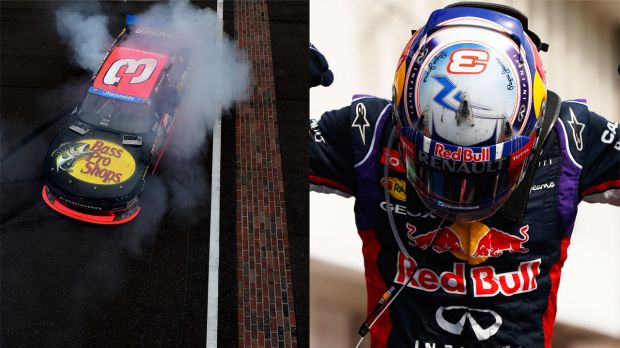 Red Bull Racing has threatened to quit F1 in 2016. Daniel Ricciardo to NASCAR via Jr Motorsports after open invitation from Dale Earnhardt Jr.

Red Bull Racing appears to be on big trouble when it comes to the 2016 season. We are only a few months away, they still don’t have an engine or so much as an engine supplier. Options this close to the season are very limited. The more likely options include an unbranded Renault engine or a customer engine from Honda. However, as time continues to click by the most likely option becomes at least a year off from F1.

Dale Earnhardt Jr was asked by Kevin Walsh on twitter, “When will we see Daniel Ricciardo in a Jr. Motorsports car?” Dale Jr has responded by saying he had an open invitation to drive for JR Motorsports on any Road Course.

Daniel Ricciardo has chosen the number 3 for his lifetime F1 number. On Ricciardo’s helmet the style of the particular 3 is identical to the 3 that Dale Earnhardt drove on NASCAR tracks in the United States. The 3 has a different style everywhere else, as the ‘official’ number style is more related to team choice than driver choice. Ricciardo has stated in the past the 3 on his helmet is to honor Dale Earnhardt Sr. and they he was a big fan growing up.

.@danielricciardo has an open invite to drive a @JRMotorsports car on a road course at any time.

The Australian Red Bull Racing driver remains confident he will be in F1 in 2016, but admitted Earnhardt Jr’s invite was tempting.

“If not, Dale Jr invited me to do a NASCAR race next year, so I might take that up if I don’t have an F1 seat,” joked Ricciardo in Mexico.

“I like America a lot, so to live in America and race, still post-F1, could be interesting.

“Obviously I want to make sure I’m here next year, but if for whatever reason I’m not, it sounds like I might have an option.”

On a side note. After seeing the open invitation to Daniel Ricciardo some drivers questioned Dale Jr with the same offer. Moto GP rider Nicky Hayden asked “Do I have the same open invite?! @DaleJr @danielricciardo @JRMotorsports”. Dale Jr responded quickly “Dreamteam!!”.

AM Racing partners with Stewart-Haas Racing