The Daniel Ricciardo slot car track display’s the Red Bull Racing driver’s ideal F1 racetrack. The track is a mashup of 40 corners from various courses on the F1 schedule.

“It’s a pretty crazy track,” he told foxsports.com.au. “I took a lot of corners that I love on the calendar and tried to put them together in some way.” 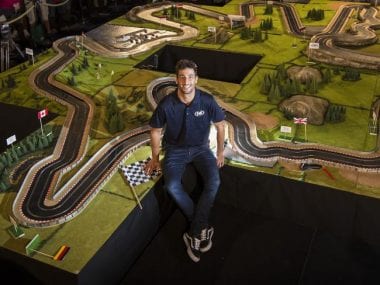 “There’s a few hairpins and tighter stuff just mainly for overtaking, but otherwise it’s all pretty fast, flowing corners which I enjoy a lot.”

“Eau Rouge is awesome but it’s flat out,” he explained. “In qualifying, I wouldn’t say it’s as challenging as Pouhon.”

“At Pouhon you have a bit off a lift, and it’s a question of ‘how much do you lift’, as opposed to Eau Rouge which is flat, and that’s it.”

“For a challenge, I thought Pouhon would be a bit better.”

Daniel Ricciardo is fresh off a runner up finish in Singapore. He climbed out of the podium finishing car and headed to Perth, where he unveiled the F1 slot car track. 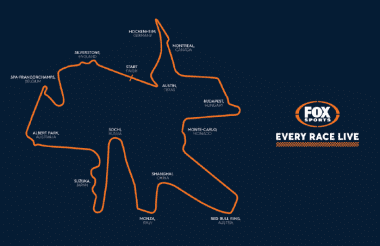 This is not the first time a Red Bull Racing driver has been attached to the world of slot car racing. The team and it’s drivers regularly put out videos from slot car tracks emulating F1 tracks.

The Red Bull Racing team even has it’s own slot car available for sale at Walmart.com

In the video below Daniel Ricciardo tours the Red Bull slot car model of the Red Bull Ring, home of the Austrian Grand Prix.