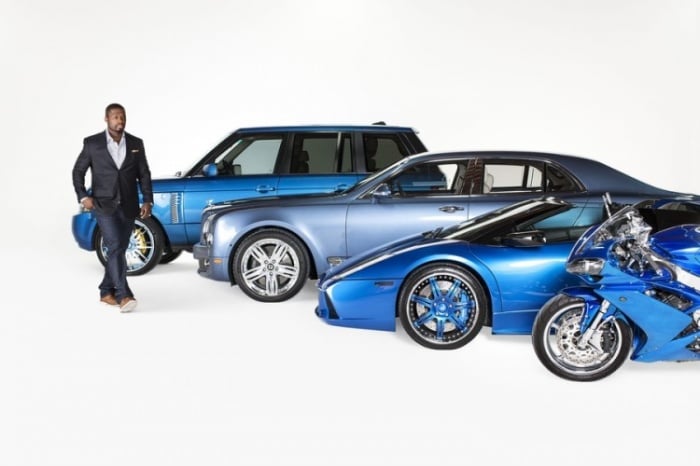 Here is a story on the 50 Cent car collection. Curtis “50 Cent” Jackson’s love affair with automobiles got off to an inauspicious start. His first car nearly got him killed, and not because he was driving too fast. In the summer of 1994, at the age of 19, Jackson plunked down $53,000 in cash made from peddling drugs on the streets of New York for a charcoal gray Toyota Land Cruiser. He tricked it out with a rooftop bike rack, new wheels and a sound system with a bass that thumped so hard it rattled the license plate against the back hatch.

A few months later, Jackson was driving his car through a rough neighborhood when a stranger pulled up next to him, flashed a menacing look and asked, “Yo, where Black at?” “Black” was the street name of a notorious–and violent–gangster. Jackson quickly put it all together: Black had a similar-looking car. Jackson shrugged at his questioner and, luckily for him, the man drove off into the night.

The next day, Jackson returned to the dealership. “Why the f**k did you sell [Black] the same color truck as me?” he demanded. “I almost got killed last night.”

He traded in the Land Cruiser for a white Mercedes-Benz 400 SEL with bulletproof windows and a 6.0 liter V-12 engine. But the second car turned out to be no better than the first. The Mercedes was conspicuous, an easy target for thieves. A pair of armed robbers ambushed him outside his grandmother’s house in Queens. Jackson barely escaped through a back alley and soon sold the vehicle.

Then came more car trouble, but this time only his ego was bruised. In the late 1990s, Jackson decided to leave the drug-dealing days behind to commit himself fully to his music, in part to please his grandmother, who’d raised him from age 8 after his mother was killed (an attempt on Jackson’s own life and the birth of his son provided the main impetus for his career change). The more virtuous life had its own problems: He was left with significantly less money. Which meant he was stuck driving a homely 1992 burgundy Dodge Caravan. “The a/c didn’t work,” he recalls glumly.

But his fortunes–and car collection–soon changed for the better. After linking up with Eminem and Dr. Dre, Jackson recorded the album that would make him a star, 2003′s Get Rich or Die Tryin’. It would go on to sell more than 8 million copies in the U.S. alone, becoming one of the most successful rap albums of all time. Buying and customizing uberluxury cars soon became the means by which he celebrated his musical triumphs.

With money from his first album, Jackson first rewarded his grandmother, leasing a Mercedes-Benz C240 for her. Next he bought himself a Rolls-Royce Phantom. He initially wanted to customize it, covering it entirely in chrome. Then he met with the president of Rolls-Royce, who showed him what a door slathered in the shiny substance looked like. “I didn’t realize how big the car was,” says Jackson, reclining on a sofa in his Midtown Manhattan office. “It would have looked like a silver bus. You know what I’m saying? So I changed my mind.”

Since then Jackson has released three more solo albums, pushing his worldwide sales total past 30 million; his next is due out later this year. He’s also created a business empire that includes his own clothing and shoe lines, videogames and films, headphones and energy shots, even his own flavor of VitaminWater. Jackson now has a net worth of $125 million. “You learn a lot about yourself when you have success for a while,” he says. “Like, a lot of things that you think are really important aren’t. But you need that process.”

One thing that has remained important to the 50 Cent car collection. He owns two bulletproof Chevrolet Suburbans that feature bombproof undercarriages. The $200,000 vehicles were built for the Iraq war. He bought a Lamborghini Murcielago to celebrate the launch of his second album. The $300,000 car was painted charcoal gray, just like his ill-fated Land Cruiser. Perhaps to erase the ghosts of his youth–and satisfy the urge he had with his Rolls–Jackson decked the Lamborghini out in an all-chrome finish.

Over the years, Jackson added a Ferrari convertible to the 50 Cent car collection and a Yamaha YZF-R1 motorcycle, along with a Bentley Mulsanne with beige leather seats (to match his coat, as he explains in one song). He recently painted his West Coast fleet a metallic blue and added matching ceramic brakes to his Lamborghini, being more interested in freshening up his existing rides than trading them for newer models–which, he says, “are starting to turn a little space-agey to me.” He’s no stranger to futuristic rides: Last year he designed a few concept cars of his own.

These days, Jackson isn’t worried about drug dealers and gangsters. It’s the taxman who merits concern.

“If you’re familiar with my man Uncle Sam, you understand the only way you can actually feel better about what he’s gonna take, come the end of the year, is lifestyle,” says Jackson. “Only thing you can do is spend some of it.”