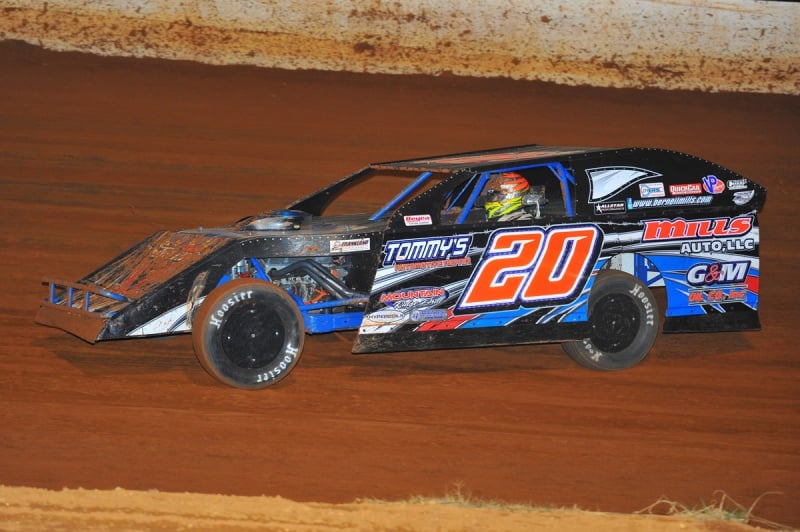 Tommy Bailey picked up two wins for Berneil Mills Racing in just three starts during the tail end of the 2012 season. The other event, the only one outside of victory lane result was a runner up finish at 201 Speedway. In 2013, thus far the team has grabbed thirteen top-five runs, a percentage of over 75% inside the top-five.

American Modified Series team owner, Berneil Mills recently made the switch from asphalt oval racing to dirt track racing. This is Mills’ eighth year in the sport and his first time taking the majority role as car owner.

Last season, Mills made a few starts of his own, sharing the drivers seat of the Lightning Chassis machine with Tommy Bailey. While Mills has not yet climbed behind the wheel of the #20 dirt modified this season, that isn’t out of the question for upcoming events as the close to the 2013 season fast approaches.

Berneil Mills Racing is excited to debut their new dirt modified team website to the motorsports community. Please log on at http://BerneilMills.com to browse the new website.

Berneil Mills Racing is in constant pursuit of new advertising partners. If you are interested in becoming involved with the American Modified Series dirt modified team please contact them via the team website for more information. Various sponsorship packages are available to fit any budget! They would be happy to explain in detail how motorsports marketing can benefit your business.

About Berneil Mills Racing
Berneil Mills is no stranger to the racing scene as he began racing in 2005. However, 2012 was a new challenge for the racing driver as he tackled the dirt surfaces for the first time. The American Modified Series racing seat is shared by between team owner Berneil Mills and veteran dirt driver Tommy Bailey.

About Walters Web Design
Founded in 2004, Walters Web Design specializes in motorsports website development and graphic design. We use advertising and social marketing to help facilitate visitors and potential customers to all our client websites. “We take pride in all of our customer websites and we want each design to be better than our last. We feel this is what has put us above all the rest in our industry.” Walters Web Design is pleased to partner with ‘Berneil Mills Racing’ for the second year and we look forward to working with them far into the future.