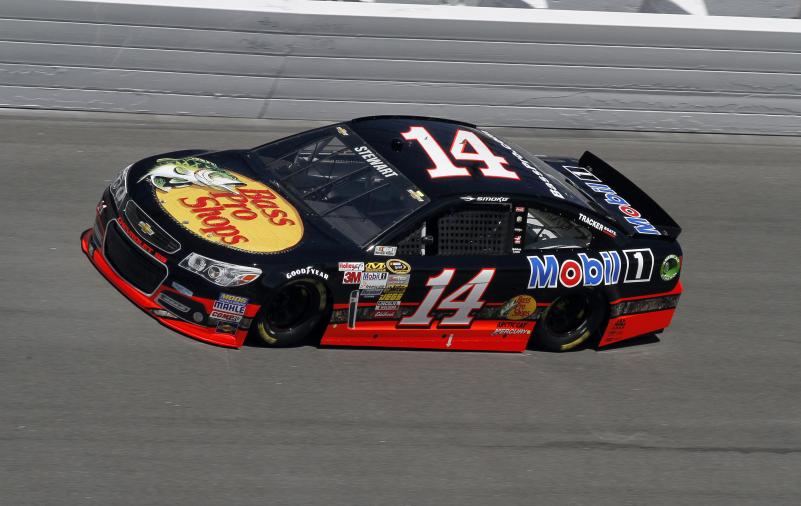 KANNAPOLIS, N.C. — Stewart-Haas Racing unveiled its new “Outlaw” of NASCAR, and his name is Gene Haas.

The renegade nickname might belong to new driver Kurt Busch, who glossed himself with that anti-establishment moniker last year. But it currently seems best suited for Haas — the man who ensured through his own force of will that Busch will join Tony Stewart, Kevin Harvick and Danica Patrick in the most inherently dynamic and potentially combustible driver lineup in recent Sprint Cup history.

Speculation over Busch’s move has prompted incessant hand-wringing over how the drivers possibly could coexist under one 140,000-square-foot roof.

All of which became immaterial Tuesday after Gene Haas, the seemingly mild-mannered and overshadowed co-owner of SHR, stole the show in nonchalantly revealing how he overruled and angered Stewart in deciding the team — already trying to recover from expansion to a third car this season — would add a fourth car in 2014 funded out of the manufacturing tool magnate’s pocket.

Never mind the players at SHR — how would its two principles get along after Haas pulled a power play on his NASCAR business partner/driver-owner to engineer the biggest free-agency coup of the season?

“I don’t think Tony was exactly enthralled with what I did, but I think he saw it my way,” Haas said, pausing as laughter filled the glass atrium lobby of Stewart-Haas Racing. “Either that or get out of the building.”

Stewart, of course, hasn’t really had much of a say lately. He missed Tuesday’s announcement while still on the mend from the broken right leg he suffered in a sprint car crash three weeks ago.

That happened to coincide with the courtship of Busch by Gene Haas, who learned a week earlier during a General Motors dinner at Indianapolis that the 2004 champion wasn’t under contract for next season. As Haas began preparing an offer to Busch, Stewart virtually was incapacitated.

Gene Haas, whose Haas Automation has posted annual revenues estimated at approaching $1 billion, decided he would hire Busch with his company as primary sponsor — constituting roughly a blank check of at least $15 million-$20 million — without consulting Stewart and deal with the consequences when the oft-irascible three-time champion learned of it.

“So I kind of did this on my own, probably overstepped my authority a tick,” Gene Haas said. “I’m not used to having too many authorities to work with. I’ve been pretty much on my own. I did realize that Tony might be a little bit upset about it. He was.

“At first he said, ‘Oh, wow, we can’t really do this because this is going to be too much of a load on the team. We’re not prepared for it. We don’t have the space.’ He actually is an astute businessman. He thought about all these little things. I didn’t think about any of that. From Tony’s standpoint, he’s more of a businessman. I just thought it would be kind of neat to have.”

NASCAR is known for its share of surreal moments, but this bifurcation might qualify as the most bizarre episode of the 2013 season: Stewart, the quintessential racer who will be sidelined for at least four months because of his insatiable desire to drive anything, trying to convince Haas, the consummate businessman, into not letting his passion for checkered flags override a checking account and common sense.

“That’s how it came about,” Haas said. “When I finally did talk to him, he actually said, ‘You need to wait a while.’ I kind of made an offer to Kurt here, and if he takes it, I’m not backing down. About a week later, Tony said, ‘OK, all right.’ ”

Haas said he and Stewart hadn’t endured many rifts and “we’re kind of pointed in the same direction … we’re using the money to accomplish something bigger than the money,” but it seemed reasonable to ponder whether Busch might engender lingering friction. There were many attempts Tuesday to defuse any such perception.

SHR director of competition Greg Zipadelli, the primary conduit for the recovering Stewart, said, “Tony was very much in favor of the fourth team. What Tony was against was us trying to get it done for next year.

“Tony was in the hospital (and) didn’t know the discussions that were going on. When we all met and talked about it and assured him we would do our best to make sure things didn’t slip through the cracks, it took him a couple days to process it no different than me. I was like, ‘Are you kidding me?’

“But it’s an opportunity of a lifetime for a race team to have a caliber of a driver like (Busch). I know he’s very excited about it now. But it’s a little overwhelming when you’re first hit with it.”

Busch, who has 24 career victories, said Stewart joked “we’re tapping into Gene’s wallet the way I wanted,” and in a statement released by SHR, Stewart said, “When Gene Haas laid out his plans for what he wanted to do in regard to this team’s future, which included bringing Kurt on board in a fourth car, it was impressive. You can’t stand still in this business. You have to constantly improve. Gene’s investment in this race team ensures the success of Stewart-Haas Racing for many years to come.”

Still, SHR has become a NASCAR powerhouse almost solely because of Stewart. His magnetic charisma and sterling record brought scads of talented crew members and sponsors in tow when he arrived in 2009 after being given a 50% stake by Haas essentially in exchange for Stewart’s name and talent — immediately transforming an organization that had been an afterthought since its 2002 inception.

The team won its first race in Stewart’s debut season, has made the Chase for the Sprint Cup every year since and won its first title in 2011. During the SHR’s climb, Stewart has emerged as such a major player as a driver, team owner and track promoter that it’s been easy to forget that he didn’t own the bankroll behind his Cup team.

Tuesday brought a rather jarring reminder.

“How can we expand to a fourth team, where will the resources come from? I am highly qualified in that area to do this. Initially since it wasn’t Tony’s idea, he was taken aback a little bit by it. But I think he saw it wasn’t a bad idea. In retrospect it looks like it’s going to be a great idea.”

But if the team starts slowly in 2014 for the second consecutive season, the slew of questions suddenly won’t be aimed at the personalities behind the wheel.

They’ll be focused at Gene Haas, who wasn’t sure how he might handle such a spotlight. While he seemed to relish the Busch announcement as his chance for an Alexander Haig-esque moment of declaring “I’m in charge” with the team’s primary leader out of commission, Haas isn’t accustomed to being the focus of media scrutiny like his partner.

“If people ask me questions, I’ll try my best to answer them,” he said. “We’ll see where it goes from there. I think the most interesting thing was the fact that Kurt Busch and Haas Automation was really done by me. I guess that is different than what you’ve seen in the past. In that respect, , there’s going to be new dynamics. My main goal here is to win races. I think Tony’s main goal is not only to win races but to run a successful business. I’m more interested in seeing the winning part of it. Maybe Tony is going to be more the businessman now.”

There is some sound business sense behind the Busch hiring. For the second straight season, the tempestuous star will be driving for a sponsor that owns his team — and that arrangement seemed to work well this season at Furniture Row Racing. Freed from many of the demands from third-party corporate sponsors that caused him headaches at Roush Fenway Racing and Penske Racing, Busch has seemed reinvigorated in carrying a single-car team to the brink of contention and a Chase for the Sprint Cup berth.

Though he reiterated mea culpas that felt familiar from past attempts at image rehabilitation (“The opportunity is about people. That’s what makes this so important that I’ve neglected in the past”), Busch truly has seemed more at peace this year.

“You want to go to the racetrack and have the least amount of responsibilities on a Friday through Sunday, just have to focus on the car,” he said. “That was what Furniture Row provided me. Having that freedom is something that I enjoyed. That was part of the discussion with Gene.”

Contrary to most sponsors that seek a polished spokesperson, Gene Haas seemed enamored with the rebellious past and penchant for conflict inherent to Busch, who likes “to let the rough edges drag sometimes.”

“I kind of like his attitude,” Haas said. “He’s not afraid to get in people’s faces. That kind of reflects my company a little bit. I think there’s a good match there. The fact that he runs into his friends at 200 miles an hour once in a while, has a few tough words with that, so I don’t really have any problems with that, either.”

There will be many challenges ahead for SHR, though, starting with the expansion of its facilities. Gene Haas estimated it will take at least six to nine months to complete an extra building, and Zipadelli joked the first project is “a rubber room” for driver debriefings.

“When you have four passionate drivers, I would much rather deal with that than to try to figure out how to get them going,” he said. “We’ll deal with what comes our way. It’s as simple as that. I think they can all help each other. At least that’s the theory I’m going with.”

Driver and crew chemistry is the secret to success in stock-car racing, and to that extent, Haas admittedly will be hoping for the best, too.

“If we don’t win any races next year, hey, I’m going to look like an idiot,” he said. “I take gambles, I made a decision, and I think I’m going to be proven right. I think we’re going to win a lot more races than anybody ever thought possible.”

Even if it doesn’t, SHR will be the most fascinating Sprint Cup team to follow next season.

A team that already had four compellingly stubborn spirits unexpectedly now has a fifth.

NEXT POST
NASCAR CUP: Jeff Gordon Fire On The Bus