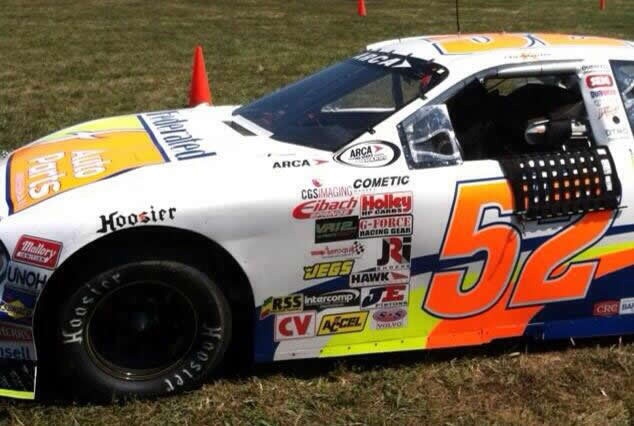 Ken Schrader won the Southern Illinois 100 presented by Federated Car Care Monday, surviving a green-white-checkered finish to win for the second time this season in the ARCA Racing Series presented by Menards.

Ken Schrader in the No. 52 Federated Auto Parts Chevrolet, won the pole, led the first 41 laps and led when it counted, the finish. He passed Tom Hessert in the No. 77 Barbera’s Autoland Dodge, just before a caution came out to set up the green-white-checkered finish. As cars fought for position, Hessert made his move but couldn’t get any closer to Schrader.

“That was just too much fun,” Ken Schradersaid in victory lane. It was his 17th career ARCA victory.

Hessert took the lead during a wild middle part of the race that saw several lead changes and door-to-door racing. At one point, Frank Kimmel took the lead on a three-wide pass in front of the main DuQuoin grandstand. A few laps later, he found himself in fifth position and Hessert grabbed the top spot.

Meanwhile, Ken Schrader knifed his way through traffic and got to second, behind Hessert.

“We pitted late, like around lap 40, and we came back out eighth, then we got to sixth. A couple things happened and we got to second,” Schrader said. “I thought we might be done if Tom didn’t have problems. He got just a little bit high with a half dozen laps to go and that opened the doors for us.”

Schrader took the lead coming out of turn two.

”That was it,” he said. “That made all of the difference. He got up high an extra foot there. If not, I never would have got around him.”

Hessert said he just a real small mistake, but it was enough for Schrader to win the race, which officially took 102 laps.

SCOTT Rookie Challenge winner Boston finished in the top 10 for the seventh straight week. He seemed to be in the top five the whole race.

“I was really just trying to be cautious as possible while being aggressive,” Boston said. “I just tried to be consistent and not make any mistakes and let everyone else make mistakes. We had really good track position today and it paid off for us.”

Fourteen cars finished on the lead lap, including Jason Basham in 14th place in the Darrell Basham Racing Chevrolet. Josh Williams, in the No. 99 Allegiant Travel-Roulo Brothers Racing Ford finished 13th after having to change engines and Ryan Unzicker finished 11th place, including a highlight-reel save on the front stretch when he avoided crashing into a spinning Kimmel.

Mason Mingus, the SCOTT Rookie Challenge leader and second in overall ARCA points, finished 12th in the 811 Call Before You Dig Toyota.

The traditional Labor Day race closed the 91st DuQuoin State Fair. Ken Schrader has now won three poles and three races at the Magic Mile. He led 47 laps Monday.He became the oldest winner in series history at Toledo in May and set the mark again Monday.

There were eight cautions for 34 laps for the race, which took 1 hour and 19 minutes to complete.

The ARCA Racing Series has four races remaining in the 2013 season. The series travels to Iowa Speedway next week for a Saturday night race, leaving races at Salem, Kentucky and Kansas on the schedule.

ARCA DuQuoin Race Under the Lights in 2016