LOUDON, N.H. – Taylor Martin of Windham, N.H., finished 26th in the fifth annual Bond Auto ACT Invitational at New Hampshire Motor Speedway in Loudon, N.H., on Saturday, September 21. Martin, who was making just her second career Late Model start, started 30th by virtue of the ACT Late Model Tour’s unique handicapping system for the starting grid in the event. She avoided a multi-car accident on the frontstretch in the early laps of the 50-lap race, and she later avoided disaster when a car directly in front of her began spraying oil on the track. Martin’s day got off to an auspicious start with an overheating problem in practice, but that was quickly repaired and the No. 20 Matt Brown Truck Repair Ford returned to the track during the session. Martin capped off her history-making day, in which she became the first driver to compete in two Invitational events on the same day at NHMS, by finishing third in the Granite State Legends Car Series Gifford’s Ice Cream 25 on the mini-oval. 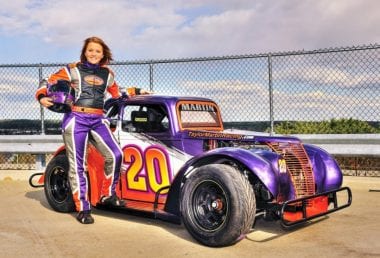 TAYLOR, HOW DID YOU FEEL ABOUT THE DAY OVERALL?

It was definitely a really good day all the way around. Really, I was only expecting to finish the race with the car in one piece. We had a few close calls out there, when a couple of cars got together right in front of me and another car blew an engine. Luckily, I guess I just willed the car around those and kept on going.

I think the biggest thing was the draft in those (Late Models) was unbelievable. I’d never been on a big track with the cars so aerodynamic. The side draft, any draft at all was just ridiculous.

WERE YOU WORRIED AFTER THE OVERHEATING ISSUE IN PRACTICE?

That wasn’t good. I came back in after the first run, and the water temp was at 280 and every single drop of water in that car poured out. It wasn’t the way we wanted to start at all, but we cooled it off and used about 12 of those little bottles of water to fill (the radiator) back up and it wasn’t a problem after that.

(Crew chief Mitch Green) had a smile from ear to ear after the race, and I was glad he was so happy. It was great to work with him and the rest of the guys – I don’t think we could have done it without therm. I’m looking forward to working with them again.

DID YOU FEEL GOOD ABOUT THE LEGENDS FINISH?

I got my 10th consecutive third-place finish there, so I guess there’s that. I got out of the ACT car, ran down pit road, and got in – I had no practice, and the car wasn’t even really set up. The car was so tight, I couldn’t even turn in the corners. Basically everyone else had ran their cars during the day, and I went in there kind of winging it and got up to third. So that was a good thing.

Kenseth doesn’t have long-term goals; Wants to help the organization