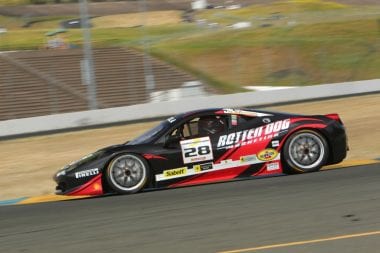 The 2014 Ferrari Challenge Schedule was released this past weekend. The season will begin on the high banks of Daytona International Speedway, in conjunction with the Rolex 24 at Daytona on January 24-26, also the historic first event of the TUDOR United Sports Car Championship (USCC). After a short break, the season will resume in Northern California at the challenging Sonoma Raceway on April 25- 27, followed by a May 16-18 race at Mazda Raceway Laguna Seca.

On the 2014 Ferrari Challenge Schedule two Canadian rounds will follow, starting with an event in conjunction with the Formula One World Championship round at Circuit Gilles Villeneuve on June 6-8. Three weeks later on June 27-29, Ferrari Challenge will visit Le Circuit Mont Tremblant in the picturesque ski village of Mont Tremblant, Quebec. The series will then visit two of the most historic circuits in America – Road America in Elkhart Lake, Wisconsin on July 11-13, and Watkins Glen International in Watkins Glen, New York on September 12-14.

To cap the 2014 Ferrari Challenge Schedule the series will take to the Circuit of the Americas in Austin, Texas on November 7-9, the same weekend the eyes of the world are on Scuderia Ferrari and the 2014 Formula One World Championship.

“The Finali Mondiali is a memorable experience for Ferrari racers, owners and enthusiasts everywhere, as it is a true Italian celebration of the entire Ferrari motorsports world, from Formula One, GT and F1 Clienti to XX Programme and Ferrari Challenge,” said Marco Mattiacci, President and CEO of Ferrari North America. “Congratulations to all the American and Canadian drivers who participated in this international competition and especially to our North American Ferrari Challenge champions.”

The 2014 Ferrari Challenge Schedule debuts during the historic opening race weekend of the new TUDOR United Sports Car Championship Rolex 24 at Daytona. Ferrari North America will be announcing more details about its complete 2014 motorsports program in the coming weeks.