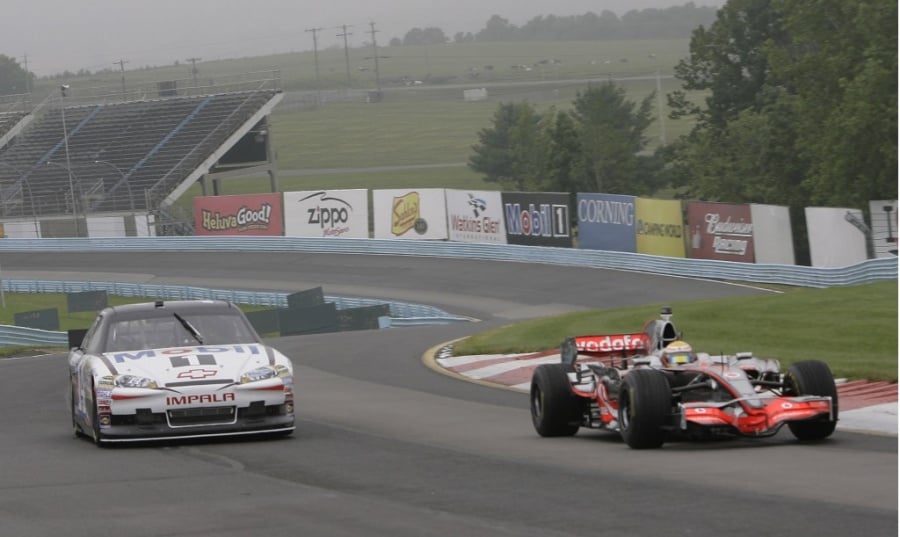 NASCAR vs F1 On November 2nd

The FIA, international motorsports’ governing body, released its 2014 calendar Wednesday, placing the U.S. Grand Prix in Austin on Nov. 2. That’s the same day as the NASCAR Sprint Cup race at Texas Motor Speedway in Fort Worth, a three-hour drive from Austin. The battle of NASCAR vs F1 is set for November.

“It’s a foolish move by Formula One,” said Eddie Gossage, president of Texas Motor Speedway. “Our two NASCAR Sprint Cup races draw the two largest crowds in Texas sports. It isn’t the smartest move to try to compete with that. I’m sure regardless of what they say publicly, the folks at the Austin track are pulling their hair out over this one. They don’t have any say over their date. “

Texas Motor Speedway says it has the capacity for up to 191,000 fans. Track officials did not immediately respond to requests for attendance figures for their 2013 Sprint Cup races and NASCAR does not provide them.

Circuit of the Americas Chairman Bobby Epstein called the date a “beautiful time of year to visit Austin” and downplayed competition between the races.

“Due to the large number of NASCAR events scheduled annually, there will occasionally be overlaps with events at Circuit of The Americas, and that will happen next year,” Epstein said. “However, there are few similarities between a NASCAR race and the Formula 1 United States Grand Prix weekend we have developed. We see this as a great opportunity to draw sports fans from around the world to Texas and to proving again that Austin is the place to enjoy premium racing and entertainment.”

The Nov. 2 date for the 2014 U.S. Grand Prix allows F1 to avoid a crush in Austin similar to this year when the race was held the same weekend as a University of Texas home football game. The provisional race calendar initially had the U.S. Grand Prix on Nov. 8, the same weekend Texas is scheduled to play West Virginia at home, which would have again stretched the city’s ability to provide hotel space and transportation.

Texas Motor Speedway has already juggled the schedule for its April race weekend, moving its planned Sprint Cup race from the night of Saturday, April 5, to Sunday, April 6, to avoid a sporting conflict with the NCAA Final Four in nearby Arlington.

As expected, the F1 calendar dropped plans to race in Mexico City and New Jersey, leaving Texas and Montreal as the only North American stops on the international circuit. Formula One boss Bernie Ecclestone had said last month he didn’t expect either race to be on the 2014 calendar but hoped to have them in 2015.

Plans for the Grand Prix of America in New Jersey had it running on a 3.2-mile street circuit running along the Hudson River with the New York City skyline as a backdrop. Race promoter Leo Hindery Jr. said he’s working to restructure the financing in order to race by 2015.

Hindery called it a “huge undertaking” to plan the road course without tapping public money while also meeting the sport’s timing demands.

Other developments on the 19-race F1 calendar include adding races in Austria (June 22) and Russia (Oct. 12) and dropping the race in South Korea.

The season will start in Australia on March 16 and will end in Abu Dhabi on Nov. 23 instead of the usual finale at Interlagos in Brazil.