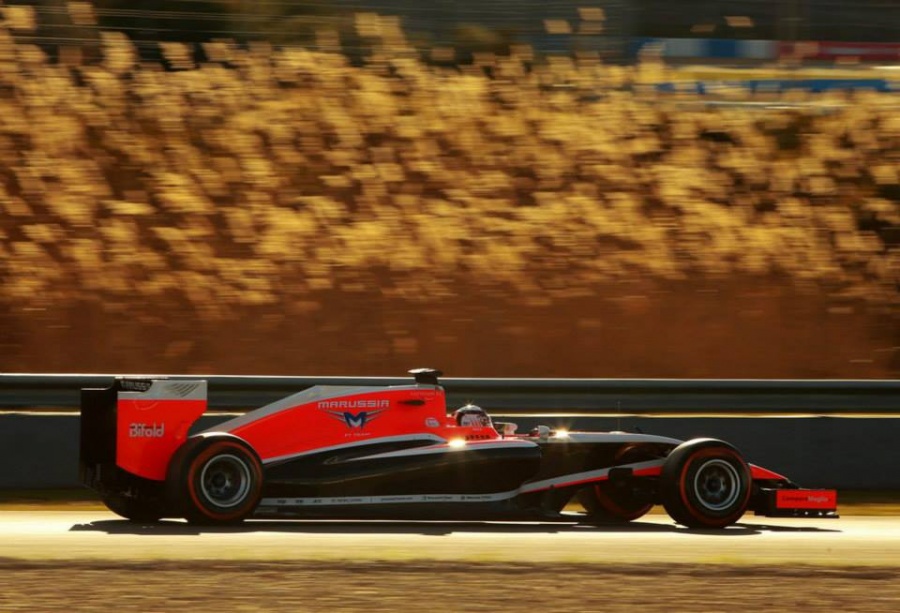 The Marussia MR03 is the Marussia F1 Team’s design response to the dramatic and far-reaching technical regulation changes of 2014, the most significant of which is the departure of the normally-aspirated engines which have prevailed in the sport since 1988, in favour of a new, more road-relevant powertrain system, underpinned by a 1.6 litre turbo-charged V6 power-unit.

The process of conceiving the Marussia MR03 began in early 2012 when a small 2014-focused design group initiated the very first chassis layouts. 12 months on, as the 2014 Technical Regulations began to take shape, an exciting new powertrain partnership was forged with Scuderia Ferrari and the design process gained greater traction, in parallel with the 2013 Grand Prix season and development of the MR02.

The technical changes from 2013 to 2014 are significant for every team, and while they represent a considerable challenge, according to Team Principal John Booth, they are also an exciting opportunity for the young and ambitious design teams at the Marussia Technical Centre in Banbury, operating to a business model that demands efficiencies in every area:

“As we saw in the step from 2012 to 2013, we have young but experienced and extremely talented technical and engineering groups within the Marussia F1 Team, who have contributed enormously to our rate of progression over the past couple of years. To have designed a car that is true to the concept first conceived in early 2012, despite the integration of an entirely new powertrain and whilst pushing hard to attain our 2013 Constructors’ Championship objective, is a testament to the extent to which we have matured as a technical organisation.”

The extent of evolution between the 2013 and 2014 cars can best be characterised by the fact that, of the 11,212 components that made up the MR02, only a handful of assemblies have been carried over to the Marussia MR03. The result, as Chief Designer John McQuilliam highlights, is the Team’s “best-ever optimisation of performance versus innovation versus design integrity.”

“Through the course of 2012,” he continues, ”we analysed every single element of the car – from the tip of the nose to the trailing edge of the rear wing – knowing just how radically different the Marussia MR03 would be under such sweeping Technical Regulations. We have benefitted enormously from the stability of our design teams, with the same personnel beginning – and now concluding – the process over a 24 month period. I think we can feel justifiably proud of the way we have responded to such a significant challenge and the quality of car we have arrived at with the Marussia MR03.

“The Marussia MR03 has been manufactured and finished to a very high standard, whilst achieving our most significant weight-saving targets to date and, importantly, with a crucial eye towards maintaining our excellent record of reliability.

“Without doubt, the greatest Marussia MR03 design challenge has been in terms of cooling, yet this is one of a few areas where we are not only very pleased with the design response, but also the degree of innovation we have achieved with our solution.

SUPERPOWER
For 2014, the Marussia F1 Team has a brand new Marussia MR03 and technical partnership with Scuderia Ferrari, the most successful team in Formula 1 history, which sees the Anglo-Russian team benefiting from a full Ferrari powertrain. As a Scuderia Ferrari customer, the Marussia F1 Team is supplied with an Internal Combustion Engine and Energy Recovery System (ERS), full transmission and all related ancillary systems.

John Booth speaks highly of the seamless transition to a new powertrain: “We have nothing but good things to say about our new relationship with Scuderia Ferrari. They are extremely professional and have been entirely supportive from the beginning. There is excellent co-operation between our two technical groups in all areas of the new relationship and this has made the considerable challenge of integrating a new powertrain a great deal easier.”

CONTINUITY THEORY
Having rewarded the Team’s faith in its Marussia MR03 all-rookie line-up in 2013, Frenchman Jules Bianchi and Briton Max Chilton return for a second season, which ticks an important box for the technical team, as Chief Engineer, Dave Greenwood, comments: “In view of the significant regulation changes, continuity is key, so it is highly beneficial to our technical team, and the engineering group responsible for developing the car in the field, that we retain the same drivers moving forward. What this means is that we have not only been able to optimise our monocoque design around an existing line-up, but we can focus all of our attentions on developing the MR03 with immediate effect. As is the case with any young driver, the step up to F1 is exciting but also very daunting; the complexity of the steering wheel controls being one small but significant example. For 2014, the level of car complexity has increased dramatically due to the considerable role to be played by the power unit and the demands that places on the driver and his engineering team. Retaining Jules and Max is one extremely valuable ‘known-quantity’ at the start of a season that is full of unknowns. At the same time as making life far simpler from a design and development point of view, from a performance perspective we have two young, highly-motivated and extremely talented drivers who we know are capable of driving our Team forward.”

Pinpointing other areas of reassuring stability during the Team’s transition to the 2014 rules, John Booth comments: “We would like to thank McLaren Applied Technologies, and also our Team Partners, for their continued support and faith in our ambitions. We were extremely pleased to reward their loyalty in 2013 and we look forward to having them along for our next exciting chapter.”

2014. WHAT LIES AHEAD?
After achieving its 2013 objective of securing 10th place in the Constructors’ Championship, the Team has set its sights on a bigger and better 2014 campaign, as John Booth states: “We have to temper the fact that there are a great many unknowns this season with the fact that we are, by nature, a highly ambitious team that is always demanding more of itself. The target is to keep moving forward and that means being in a position where we no longer have to focus on the threat from behind and, instead, take the fight to the teams ahead. It is very early days to be speculating about relative performance though and that is something we can perhaps only speak with confidence about in Australia in 45 days’ time.”

Looking beyond the Team, at the wider sport, it is John’s prediction that “the fans can look forward to a very interesting season, with a variety of technical storylines unfolding up and down the pit lane, chief among them concerns over reliability given the relative lack of familiarity with so many new systems.”