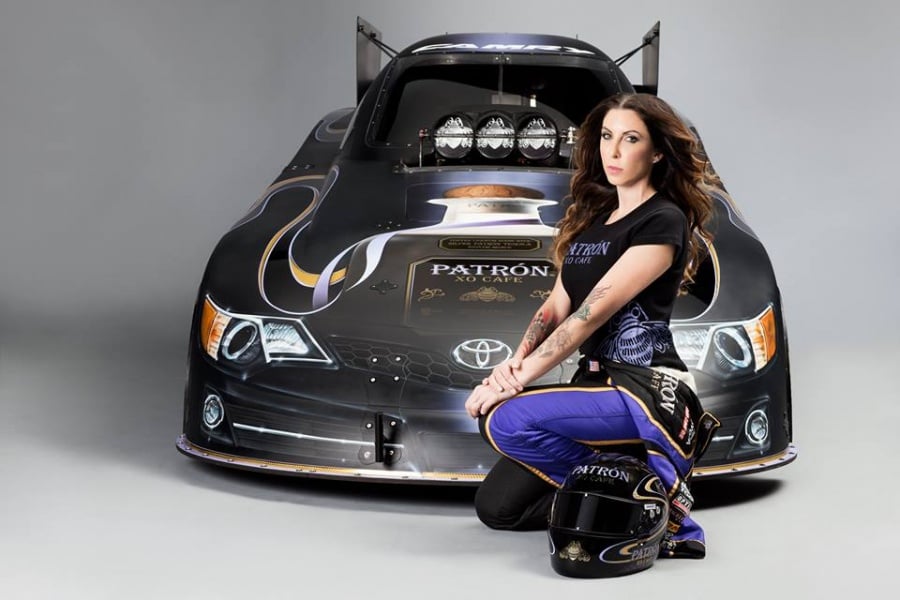 Armed with a brand new look and a renewed sense of vigor and confidence, the third year Funny Car team is looking forward to proudly debuting their new Patrón XO Cafe purple, gold, and matte-black hot rod in front of fans for the first time. Patrón XO Cafe defies convention, marrying the great taste of Patrón Silver tequila with the natural essence of fine coffee – it’s exciting and exhilarating and provocative, exactly what Alexis stands for.

“We’ve undergone a lot of exciting changes during the off-season, most notably, switching from Patrón’s signature ‘Patrón Silver’ livery, to their ‘XO Cafe’ brand. It’s a big change- pretty much everything needed a makeover, but we’re still in the Patrón Spirits Company family, and we’re proud to be representing the XO Cafe brand,” said the Funny Car driver, who is going into her ninth season as an NHRA competitor. “Everything is different to reflect the XO Cafe brand- new truck wraps, hero cards, website, merchandise- anything you can think of, really. We’re all very excited for fans to see our new look. We’ve also expanded our merchandise program, to make it easier for fans to proudly display their team pride. In addition to our merchandise trailer [present at all 24 NHRA Mello Yello events] and our e-boutique, www.alexisdejoriaracingshop.com, our merchandise will now be available via Maingate.”

“Another big change for our team is the addition of some new crew members. There is a fresh, new vibe in our pit, and everyone feels really good. We have our solid car that we had towards the end of last season, and we were able to continue to build off of that during winter testing. We’re all just very confident about this season and excited to showcase our new brand. We’ve continued to improve over the past few years and I have no doubt we will finish solidly in the Top Ten this season,” said the Austin-based driver. The team finished in the No. 12 spot in the NHRA’s Countdown to the Championship rankings at the conclusion of the 2013 NHRA Mello Yello Drag Racing Series, with four semi-final finishes to their credit.

Prior to the race weekend, DeJoria, who is gracing the cover of the current issue of National Dragster and featured in this month’s issue of Austin Fit magazine, will be stopping by several Los Angeles-based media outlets to help promote the Patrón XO Cafe brand and the upcoming NHRA race. “We have a lot going on leading up to the race this week. I’m going to bring my prized ’67 Chevy Chevelle SS to Adam Carolla’s studio where we’ll film the popular car show,Carcast. I’ll also be visiting the KTTV FOX 11 studios on Tuesday evening, appearing live on KTLA Wednesday morning, and taping an episode of Nick Mom, a fun show on the Nickelodeon channel. These are all wonderful opportunities to show off our sport, and hopefully introduce NHRA drag racing to a new audience.”

Alexis DeJoria and the Kalitta Motorsports Patrón XO Cafe Toyota Camry Funny Car team kicks off the season opener this Friday, February 7 at 1PM PST. For more information, please visit www.alexisdejoria.com, Follow Us on Twitter @ADR_Nitro771, or Like Us on Facebook Alexis DeJoria.

About Alexis DeJoria
Alexis DeJoria daughter of the famed John Paul DeJoria, co-founder of John Paul Mitchell Systems and proud owner of Tequila Patrόn, is a professional NHRA race car driver, competing in the nitro Funny Car class on the Kalitta Motorsports team. Alexis drives the Patrόn XO Cafe sponsored 2014 Toyota Camry. Alexis, who had all the opportunity in the world to pursue any type of career, felt strongly about following her passion, and her need for adrenaline drove her to pursue the unlikely profession of auto-racing. The determination to ‘blaze her own trail’ continues to drive her and push her to higher levels in male dominated sport of drag racing.

About Kalitta Motorsports
Based in Ypsilanti, Mich., Kalitta Motorsports is a Top Fuel and Funny Car drag racing team in the NHRA (National Hot Rod Association) Mello Yello Drag Racing Series. The team was founded and is owned by drag racing icon Connie “the Bounty Hunter” Kalitta. For more than 50 years, Connie has been involved in the sport as a driver, tuner, and an owner. Kalitta Motorsports is one of the most successful teams in the history of auto racing with five world championships and over 50 national event titles in five different professional drag racing sanctioning bodies since it was established by Connie in 1959.