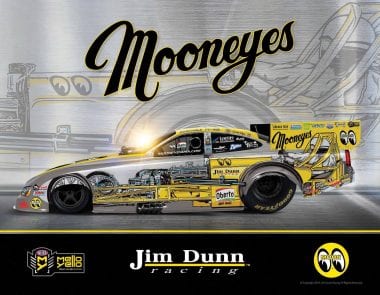 (November 7, 2016)  Fans of Jim Dunn Racing attending the NHRA Auto Club Finals, and those watching on Fox Sports broadcast coverage, will see a unique design on the team’s nitro Funny Car this weekend.

Graphics on the side of the Mooneyes Funny Car body are derived from the famous Mooneyes dragster of the 60’s. The design features the Dragmaster Chassis with a small block Chevy engine, Moon/Potvin front mounted Super Charger, and Hilborn Injection.

In 1963, sponsored by Revell, the Mooneyes dragster was among several other race cars that toured in England and ran and recorded a 9.99 elapsed time at 164 MPH top speed.

The original Mooneyes dragster is housed at the Don Garlit’s Museum of Drag racing in Florida. A replica will be on display for all fans to see in the Nostalgia Corral at the upcoming Finals in Pomona.