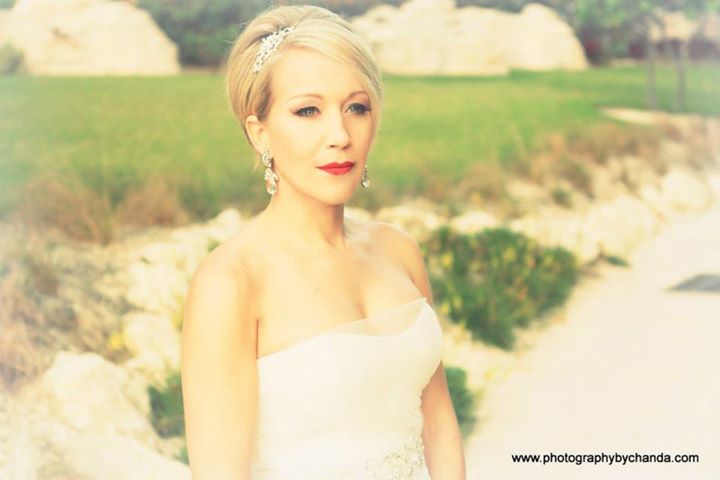 Meet the newly wed couple, Clint and Lorra Bowyer who were married during the off week. See the marriage photos posted below.

Toyota Racing tweeted out a photo from the waterside ceremony. The NASCAR couple received a load of friendly tweets from throughtout the racing community.

Clint Bowyer (born May 30, 1979) is an American stock car racing driver. He drives the No. 15 Toyota Camry for Michael Waltrip Racing in the NASCAR Sprint Cup Series. Prior to driving for MWR, he drove for Richard Childress Racing for eight years and won the 2008 NASCAR Nationwide Series championship.

Bowyer started out 2013 by participating the Rolex 24 Hours of Daytona, driving a Ferrari 458 with AF Corse/Michael Waltrip Racing. The team finished 16th overall and 7th in class.

At Richmond International Raceway on September 7, Bowyer became the subject of controversy as, late in the race, his No. 15 Toyota spun; accusations were made that the spin was intentional, as part of an effort by MWR to ensure that Martin Truex, Jr. qualified for the Chase for the Sprint Cup.

NASCAR president Mike Helton stated the following morning that scoring officials on the scene did not believe the spin was intentional, but that NASCAR was reviewing the incident. The following Monday evening, NASCAR docked all three MWR teams, including Bowyer, 50 driver/owner points.

Although NASCAR found no conclusive evidence that Bowyer’s spin was intentional, he was still docked points because NASCAR opted to punish MWR as an organization. MWR was also fined $300,000. Despite the large penalty, Bowyer retained enough points to remain in the Chase. He had already clinched a spot in the Chase at the Irwin Tools Night Race.

Bowyer did not participate in the Sprint Unlimited as he did not win a pole during the 2013 season. His season started on a wild note when Bowyer was involved in a last lap crash of race 2 in the Budweiser Duels, with Bowyer’s car being sent airborne and performing a barrel roll before landing on its wheels.

Bowyer started his own Dirt Late Model team, Clint Bowyer Racing in 2008. Well-established veteran Shannon Babb of Mowequa, IL was behind the wheel of Clint’s Rocket Chassis, and had a very solid season. Babb left to form his own team at the end of 2008, due to wanting to run more of an “outlaw” type schedule, and wanting to race closer to home to be with his family.

For the 2009 season, the 2005 World 100 Champion Dale McDowell (who ironically inherited the win via Babb being light at the scales) took over the seat, and the number was changed to Dale’s signature #17M, Jared Landers also drives for the team in the #5 late model.

The team elected to run the Lucas Oil Late Model Dirt Series full-time in 2009, choosing to run Warrior Racecars, with help from Warrior’s owner, Sanford Goddard. Winning two races and finishing fourth in the points standings, it was a decent season. Since then, the 17M has become a staple of the Lucas Oil Series, continuing on the 2010 tour.

Clint Bowyer Racing also has fielded cars in Tony Stewart’s Prelude to The Dream in 2008 (Bowyer, 2nd and Jimmie Johnson, 10th) and 2010 (Johnson won, Bowyer 2nd). Both years these were also Warrior Racecars.