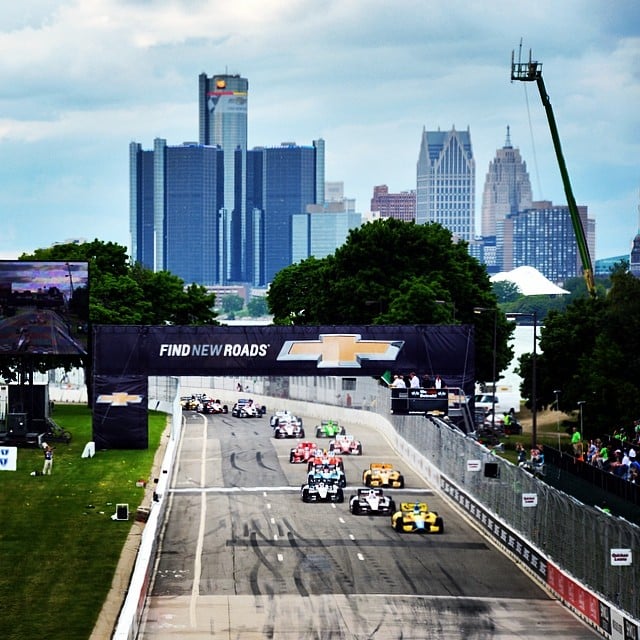 See the full Indy Duel in Detroit results and highlight video below.

DETROIT — In the shadow of the Renaissance Center — the cylindrical headquarters of General Motors — Will Power gave the Verizon IndyCar Series manufacturer and team owner/area resident/race promoter Roger Penske a signature victory.

Power, who started 16th in the No. 12 Verizon Team Penske car, overtook race leader Ryan Briscoe on a Lap 60 restart and then held off Graham Rahal over the 10-lap sprint to win by .3308 of a second in Race 1 of the Chevrolet Indy Dual in Detroit presented by Quicken Loans.

“Just a great job by the team, putting me in a position to use our speed,” said Power, whose 23rd Indy car victory tied Tommy Milton for 18th all time. “That was hard work. It’s a massive win for me, massive win for the team and especially for Roger and for Chevy. They’ve been trying to win here for a long  time and we finally did it with a Honda trying to charge by.

“(Rahal) was really fast. I was worried but I just kept executing good laps.”

Rahal, driving the No. 15 National Guard car for Rahal Letterman Lanigan Racing, started a season-best ninth and recorded his best finish since placing second at Long Beach in April 2013.

“We’ve been fighting awfully hard to just finish where we have been finishing and so to finally get a result like this it means more than words,” said Rahal, who was the first to retire from the Indianapolis 500 six days earlier. “As we look forward to (Race 2 on June 1), I think we can do one better and we really learned a lot today and a lot that is going to help us.”

Qualifications for Race 2 — split into two groups of 12 minutes each of track time — are at 10 a.m. (ET) June 1 and will set the starting lineup for the 70-lap race at 3:30 p.m. (ET) on ABC. Allen Bestwick is the chief announcer, with Scott Goodyear and Eddie Cheever Jr. the analysts.

The race will be broadcast on IMS Radio Network affiliates, XM 209 and Sirius 213, www.indycar.com and INDYCAR 14 app (both in conjunction with real-time Timing & Scoring). Paul Page is the chief announcer.

Both races on the 2.36-mile, 13-turn street circuit carry full points. Power moved to three points of front-runner Ryan Hunter-Reay in the championship standings. Castroneves is 31 points behind Power, his Team Penske teammate.

Tony Kanaan in third place — his 66th career podium and best street/road course finish since Baltimore in 2011 — posted his best finish of the season, as did Justin Wilson in fourth (climbing from the 19th starting position). Verizon P1 Award winner Helio Castroneves, who led a field-high 30 laps, finished fifth.

James Hinchcliffe, who started on the outside of Row 1, finished sixth and Andretti Autosport teammate Carlos Munoz followed up his fourth place in the Indianapolis 500 with seventh place. Rookie Carlos Huertas earned his best finish of the season in eighth despite being penalized for a pit safety violation, while Charlie Kimball and Marco Andretti closed out the top 10.

Rahal, whose lone Verizon IndyCar Series win came in his series debut on April 4, 2008, at St. Petersburg, Fla., when he was 19 years old, was never more than a second behind Power in the closing laps but couldn’t muster an overtaking opportunity on the narrow course.

“I was just trying to give him a run for his money,” Rahal said. “I thought if I can just force him into a little mistake, this is mine. Didn’t quite get there but I’m very proud of this team.”

Honda had spoiled Chevrolet’s party on Belle Isle since the bowtie became the entitlement sponsor of the event in 2012. It recently signed a three-year extension.