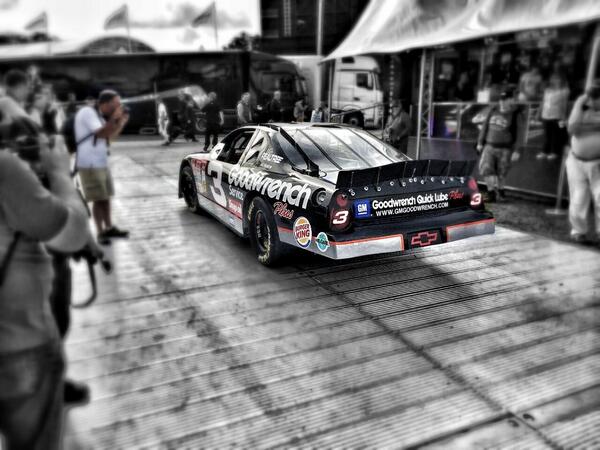 For the fifth time, Richard Childress Racing (RCR) was invited to participate at the world’s biggest and most diverse celebration of motorsports history – The Annual Goodwood Festival of Speed in England.  This time RCR brought Kerry Earnhardt to drive Dale Earnhardt Sr car.

The Festival runs June 26-2 and features race  cars from past and present participating in both demonstration and competition runs up the nine-turn, 1.16-mile Hillclimb circuit.  “It’s a huge honor to be invited and participate in this incredible motorsports event.” said Richard Childress, President and CEO of Richard Childress Racing. “I’d like to thank Lord March for his friendship and for allowing us this opportunity.”Since its inception in 1993, the Festival has been held on the English estate of Lord Charles March, West Sussex, England, and RCR will be providing a pair of stock cars to be driven at this year’s Hillclimb.  The 2000 No. 3 GM Goodwrench Chevrolet Monte Carlo, one of the last winning cars driven by the late Dale Earnhardt, was piloted by his eldest son, Kerry Earnhardt who left a quote. “I had the honor of attending the Festival in 2010, and then again in 2013”, Kerry Earnhardt said. “The fans are so enthusiastic about NASCAR and to have the opportunity to participate in such a prestigious event for the third time is incredible.”One of the most versatile and accomplished race car drivers in the world, Max Papis joined Kerry Earnhardt and drove a No. 3 Dow Chevrolet SS from the RCR stable of vehicles in a competitive run up the Hill.  This Chevrolet is regularly driven by two-time NASCAR Champion Austin Dillon, and Childress’ grandson, on the NASCAR Sprint Cup Series circuit.  “I’d like to thank Richard Childress for the opportunity to represent his race team at this year’s Festival in England by driving that famous No. 3,” Papis said. “It’s a privilege and I do not plan to take that lightly.”Both cars participating in the Goodwood festivities will be prepared by and cared for at the Festival by Danny Lawrence, former crew member of the No. 3 team.  Lawrence is an award-winning engine builder and long-time employee of Richard Childress and ECR Engines.