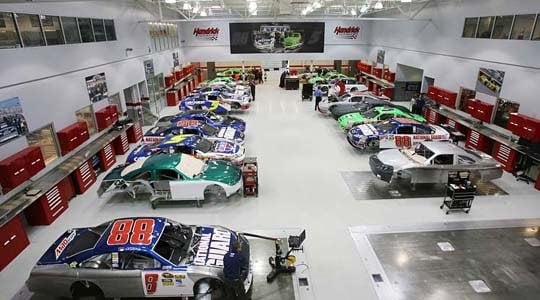 A group of nine multi-car teams participating in the NASCAR Sprint Cup Series (NSCS) announced today they have formed a collaborative business association called the Race Team Alliance (RTA). The purpose of the organization is to create an open forum for the teams to explore areas of common interest and to work collaboratively on initiatives to help preserve, promote, and grow the sport of stock car racing.

The Race Team Alliance organization intends to open up its membership to all full time NSCS teams in the very near future. In providing a vehicle for the teams to work together, the organization creates for the first time a single entity to engage with stakeholders on creative ways to market and experience the power of the sport’s teams and drivers.

As part of its focus, the Race Team Alliance also plans to explore innovative ways to harness the combined purchasing power and scale of the teams’ operations to drive efficiencies in costs. Rob Kauffman, co-owner of Michael Waltrip Racing, has been elected the first chair of the RTA.

“With the encouragement of NASCAR and the manufacturers, the teams have met in various forms and forums over the years to explore areas of common interest. This simply formalizes what was an informal group.” said Rob Kauffman. “The key word is ‘Collaboration’. We all have vested interests in the success and popularity of stock car racing. By working together and speaking with a single voice, it should be a simpler and smoother process to work with current and potential groups involved with the sport. Whether it be looking for industry-wide travel partners or collaborating on technical issues – the idea is to work together to increase revenue, spend more efficiently, and deliver more value to our partners.”

“We are aware of the alliance concept the team owners have announced, but have very few specifics on its structure or purpose” Brett Jewkes, NASCAR Vice President and Chief Communications Officer said in an emailed statement.

“It is apparently still in development and we’re still learning about the details so it would be inappropriate to comment right now. NASCAR’s mission, as it has always been, is to create a fair playing field where anyone can come and compete. Our job is to support and strengthen all of the teams, large and small, across all of our series and we’ll continue to do that. NASCAR is a unique community with hundreds of stakeholders. They all have a voice and always will.”