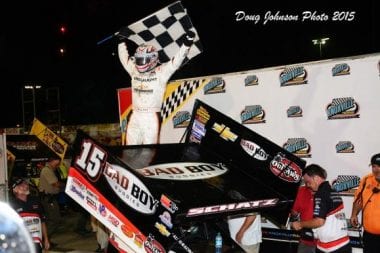 Knoxville, IA, August 15, 2015 – If anyone had any doubts as to whether or not Donny Schatz was going to earn his ninth Knoxville Nationals title, the North Dakota native made a statement by leading 50 laps flag-to-flag to win the 55th running of the FVP Knoxville Nationals presented by Casey’s General Store.

Making wholesale moves through traffic in the closing laps, Donny was asked about the very close passes, “It’s not the traffic that was bothering me. It was the restarts. It’s my job to get through traffic. If I can’t then I’m probably going to lose my job. The past couple weeks, seem like people get a run on you and can slide you, so you just had to do something different. One time I’d go to the bottom, one time I’d go to the top and keep mixing it up, but it’s hard to do that without mixing yourself up.”

“The boss was here tonight. Can’t thank him [Tony Stewart] enough for all the support to allow us to be with Bad Boy Buggies, Chevrolet Performance, and all our marketing partners to do what we love to do.”

Taking off from the pole, Donny Schatz jumped to the lead with Kerry Madsen in tow. Working low on the Knoxville Raceway, the Tony Stewart Racing No. 15 was joined by the No. 29 of Kerry Madsen who railed the cushion.

Closing on the lead on the third rotation, Madsen continued to build momentum, pulling to the back bumper Schatz off the fourth turn as the No. 15 swapped lines to the high side down the front stretch to block the run of the American Racing Custom Wheels No. 29.

Keeping Donny within sight as the leaders hit traffic on Lap 10, the Bad Boy Buggies No. 15 found roads blocked, allowing Madsen to close in once again. With a full head of steam on Lap 12, Donny put a pair of slower cars between him and Madsen; leaving the Aussie to contend with Danny Lasoski.

Coming from sixth, the GoMuddy.com No. 2 worked cushion to hub on the Knoxville Raceway, trading second with Madsen as the caution flew on Lap 16 for the No. 41 of Jason Johnson who shredded the left rear tire.

Underway, Madsen kept pace into the first two turns with Lasoski in line. Unable to do anything with the No. 15, the race for second saw Lasoski taking the spot on Lap 25, just as the field came to the mid-point break.

Changing gears on the No. 15 during the five minute break, Schatz took the high line with Danny charging low. Unable to advance to the lead, Donny began pulling away as Danny worked to hold his second position, but would slip to fourth on Lap 32 as Kerry Madsen flew by on the cushion with Brad Sweet taking the low line.

Watching as the No. 15 pulled away with a 2.104 second advantage, the red flag flew on Lap 35 for the No. 51 of Paul McMahan who tripped the cushion in turn four battling for eighth with Bryan Clauson. Quick work by the Pit Crew put the CJB Motorsports No. 51 back on track for the restart.

Splitting lines on the restart, Madsen again could not make work of the No. 15, but again had to contend with Brad Sweet. Working low on Lap 37, Brad Sweet all but had Madsen cleared, only to see the No. 29 squeeze between his Right Rear Tire and the wall.

Going back and forth for the runner-up spot, the pair kept Schatz within seven tenths of a second as the caution waved again on Lap 40.

Again keeping Schatz to under a second advantage, the pair worked to traffic on Lap 48 with Schatz boxed in by back markers. With the center line barely open, Donny threaded the needle, putting the finishing touches on his ninth FVP Knoxville Nationals victory; crossing 1.363 seconds ahead of Kerry Madsen.

“I tried as hard as possible to get it done. I got behind him in dirty air and was just was jumping around on the cushion like an idiot, but I wasn’t going to leave anything on the table,” said Madsen. “I thought it was on there. I thought I had a quicker car and I just apologize for not getting the job done but he didn’t make a mistake the last 15 laps. I was ready to pounce, but it didn’t happen.”

Holding on for third was Brad Sweet after a hard battle with the No. 29.

“I tell you what this is a huge step in the right direction for Kasey Kahne Racing and the Ollie’s Bargain Barn Outlet. The car was really good. We hit on some stuff at the Front Row Challenge and we carried some momentum into here and when the time to hit it right in the A-Main was right, we hit it. I really didn’t want to see those yellows because I really felt like we were more maneuverable than the guys in front of us, but hats off to Donny. He makes it really hard to win this race.”

Coming on strong in the second half of the feature event, Shane Stewart came from 12th to fourth with Joey Saldana completing the top-five. From 14th, Brian Brown crossed sixth with Daryn Pittman going from 15th to seventh. Having battled up front for so many laps, Danny Lasoski slipped to finish eighth with Lucas Wolfe ninth and Greg Hodnett earning hard-charger honros in tenth from the 23rd starting spot.

Wayne Johnson led the distance to win the B-Feature. Running second at the white flag, Bill Balog ended up with the win in the C-Feature as Davey Heskin ran out of fuel on the final lap. D-Feature action was topped by Josh Baughman. Jimmy Light captured the win in the E-Feature, becoming the first driver in the history of the Knoxville Nationals to win the consolation feature twice; Light also won the event in 2014.

Join us Saturday night, August 29 for Season Championship Night! All three Knoxville Championship Cup Series sprint car classes will be putting it on the line for an increased purse, including $5,000 to the 410 winner. The FVP National Sprint League will ensure a high level of competition in that class! For more information on Knoxville Raceway, visit www.KnoxvilleRaceway.com!