HOMESTEAD, Fla., November 20, 2015 – Wood Brothers Racing announced today that it will run a full, 36-race schedule in 2016 with Ryan Blaney continuing as the team’s driver contending for a NASCAR Sprint Cup championship with Motorcraft/Quick Lane and Ford Performance returning as anchor sponsors.

“We are beyond excited to make this announcement about going back to full time competition,” said Eddie Wood, team co-owner, at a press conference at Homestead-Miami Speedway during Ford Championship Weekend. “It has been something we’ve worked toward since 2009 when we started running limited schedules.

“I have to thank Ford’s Dave Pericak and Raj Nair, Edsel Ford, our technical alliance partners Team Penske and Roush Yates Engines, as well as everyone at Motorcraft, for working with us to make this day possible,” Wood continued. “It’ll be fun to see just how good Ryan Blaney, Jeremy Bullins and our team can be over a full season.

“Lastly,” he added, “it’ll be great not to have to worry about rain anymore on qualifying day.”

Due to their limited schedule and the current point system, inclement weather prevented Wood Brothers Racing from qualifying for three races in which they were slated to run this season.

“We are proud to have played a role in helping get the Wood Brothers back on the track full time for 2016,” said Pericak, global director, Ford Performance. “These guys have been Ford’s most-loyal team for 65 years and they deserve the chance to show how they can perform when they are at every race. They’ve earned a full-time slot by running strong all year, even under adversity.  We plan on being part of this when they capture their 100th Cup victory.”

“This is a day everyone has looked forward to,” said Edsel B. Ford II, board member, Ford Motor Company. “The Wood Brothers represent everything that is great about this sport – tradition, family, loyalty, competition.  When we asked them to regroup and consider going part-time in 2009, it was always with an eye on getting back to this day.  And we are thrilled it is finally here.”

Thus far in 2015, the Wood Brothers’ iconic No. 21’s best finishes were fourth in the spring Talladega race, 12th at the Brickyard, 14th in the fall Charlotte race and seventh in the most-recent Kansas race. Even in the four races when the team had engine problems, the Motorcraft/Quick Lane Ford Fusion was running toward the front of the field when the trouble arose. 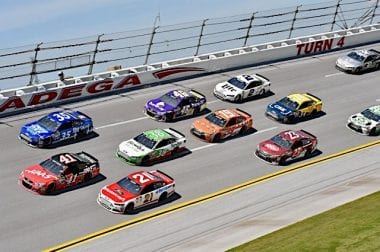 “This is every driver’s dream come true,” Blaney said, “Getting a chance to run for the NASCAR Sprint Cup. I’m really looking forward to running a full schedule with this historic Wood Brothers team and hopefully get them their 99th and 100thwins sooner rather than later.”

Motorcraft’s partnership with Wood Brothers Racing began in 2001 and quickly bore fruit by winning the Food City 500 at Bristol Motor Speedway with Elliott Sadler behind the wheel. The Motorcraft-Wood Brothers pairing had its greatest triumph in 2011 when rookie driver Trevor Bayne captured the Daytona 500.

“We are thrilled to have been able to work with Ford Performance to make the Wood Brothers’ a full-time race team for the 2016 NASCAR season,” said Mary Lou Quesnell, director of marketing for Ford Customer Service Division. “Wood Brothers Racing has been an excellent representative of our brands for 15 years and we look forward to seeing the famous No. 21 Motorcraft/Quick Lane Ford Fusion on the track week after week.”

In addition to Motorcraft and Quick Lane Tire and Auto Centers, the team will look to add additional sponsors to the roster during the 2016 NASCAR Sprint Cup season.

Wood Brothers Racing was formed in 1950 in Stuart, Va., by Hall of Famer Glen Wood. Wood Brothers Racing is the oldest active team and one of the winningest teams in NASCAR history. Since its founding, the team won 98 races (including at least one race in every decade for the last seven decades) and 117 poles in NASCAR’s top-tier series. Fielding only Ford products for its entire history, the Wood Brothers own the longest association of any motorsports team with a single manufacturer. Glen’s brother, Leonard, who still can be found in the team’s pit, is known for inventing the modern pit stop.