The NASCAR BorgWarner car will debut this weekend. BorgWarner used to provide parts to the Wood Brothers Racing team way back in 1976. That was when the NASCAR racecars were of course more on the ‘stock’ side of stock car racing. 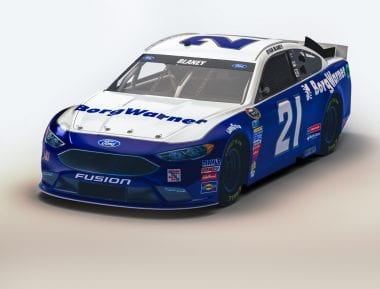 The Wood Brothers and their iconic No. 21 Ford Fusion will carry the colors of automotive supplier BorgWarner Inc. in this weekend’s AAA Texas 500 at Texas Motor Speedway.

The pairing of the Woods and BorgWarner is an appropriate one, given the long histories of the two companies. The Woods have been racing in NASCAR continuously since 1953, longer than any other team.

BorgWarner, which is headquartered in Auburn Hills, Mich., was formed in 1928 and has become a global product leader in clean and efficient technology solutions for combustion, hybrid and electric vehicles.

BorgWarner’s history in auto racing is symbolized by the Borg-Warner Trophy™, which has been presented to every winner of the Indianapolis 500 since 1936.

Both companies have long histories with Ford Motor Company, as the Woods have raced only Ford products throughout their history and BorgWarner has been a supplier of Ford components for decades.

It was BorgWarner that developed Ford’s first automatic transmission, the Ford-O-Matic, in 1951. The company continues to produce major innovations in all-wheel drive, emissions, engine timing, turbocharging, and electric and hybrid propulsion systems.

Just as racing in the Sprint Cup Series has seen the Woods adapt to technology they never envisioned in the early days, BorgWarner is on the forefront of automotive innovation, transforming vehicles to more fuel efficient, cleaner technologies with systems that deliver powerful propulsion. 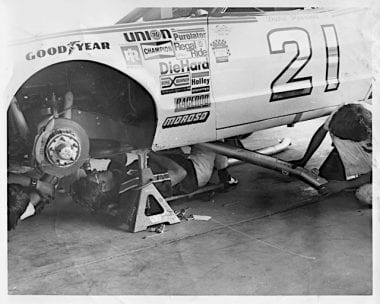 Eddie Wood, co-owner of the No. 21 Ford Fusion, said this weekend at Texas won’t be the first time his family’s cars have carried the BorgWarner logo.

“We’ve used BorgWarner components on our cars for years,” Wood said. “The Mercury that David Pearson drove to victory in the 1976 Daytona 500 has a BorgWarner decal prominently displayed on the front fender of the car. At that time, they were a contingency sponsor in NASCAR.”

In fact, Wood still has a few BorgWarner parts in the family’s racing museum. A rotor button, ignition breaker points and a condenser still in the original boxes.

“It’s an honor to get to represent BorgWarner at Texas, given the company’s long history in racing, and the fact that we’ve used their components so often in the past,” he said. “We’re hoping to do them proud this weekend.”

Ryan Blaney, the rookie driver of the No. 21 Ford Fusion, enters this weekend with three top-five and eight top-10 finishes so far in his first full season in NASCAR’s elite division. His 19th-place finish at Martinsville Speedway on Sunday moved him to 20th place in the driver standings with three races left to run.

Qualifying for the AAA Texas 500 is set for Friday at 6:45 p.m. Eastern Time, and the race is scheduled to get the green flag just after 2 p.m. Sunday with TV coverage on NBCSN.