Brian France talks Tony Stewart points waiver upon his return. NASCAR rules state very clearly that a driver must compete in all 26 points-paying regular-season races. In addition said driver must be in the top 30 in points to be in the running for one of the 16 playoff slots at season’s end.

Without this rule a driver would be able to qualify for the playoff’s by winning a single race, a one off race. They avoid that with this rule.

However, there are exceptions. Last year Kyle Busch was injured at Daytona in a NASCAR Xfinity Series race. That race took place before the start of the 2015 Season, Kyle then missed a large portion of the season. He was however granted an exception to the points rules and based on his wins, he made the chase.

Tony Stewart has the possibility of making a championship run in 2016, in his final season. However, like Kyle Busch, he will likely need a waiver from NASCAR to be eligible for the chase. Based on what the NASCAR CEO had to say it sounds like Tony Stewart may be award such a waiver, though nothing is official yet.

“I think we’re going to treat that just as we did Kyle Busch,” NASCAR chairman and CEO Brian France said Wednesday on SiriusXM NASCAR Radio with host Dave Moody. “There obviously is a balance … you can’t come in the race before the Chase starts and win that race and expect to cruise on in for the final 10 races. So there’s some balance, but this is the beauty of the Chase. 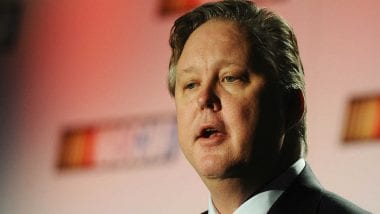 “We have that ability to make some medical and other important exceptions for things like this. But you still have to compete at a high level over a number of events. We will cross that bridge when we can. I hope for his sake, just like I was hoping for Kyle’s, that will be sooner rather than later. And the sooner the better in terms of making a decision on our end.”

Brian France was asked if it makes a difference that this ATV accident happened outside of a NASCAR sanctioned track. A recreational injury, does it make a difference?

“Oh, I don’t know,” France, NASCAR’s third-generation leader, said on SiriusXM. “All the circumstances are going to be different. Of course, in Kyle’s situation in particular, that he hit a barrier where we would have all liked to have had a SAFER barrier a year ago, of course they matter. But in the end we fully intended … it was always part of the benefit of the Chase that you could arguably be the best in a given season but not make every event, and that’s a benefit. These are extraordinary circumstances.”

“I know Tony’s accident was certainly very very unpredictable to him,” he said. “We will cross that bridge. He knows and we all know the goal is to get him back racing where he can hopefully get back to his high level of competition, win a race and be in the Chase. I’d like to see nothing more than that.”