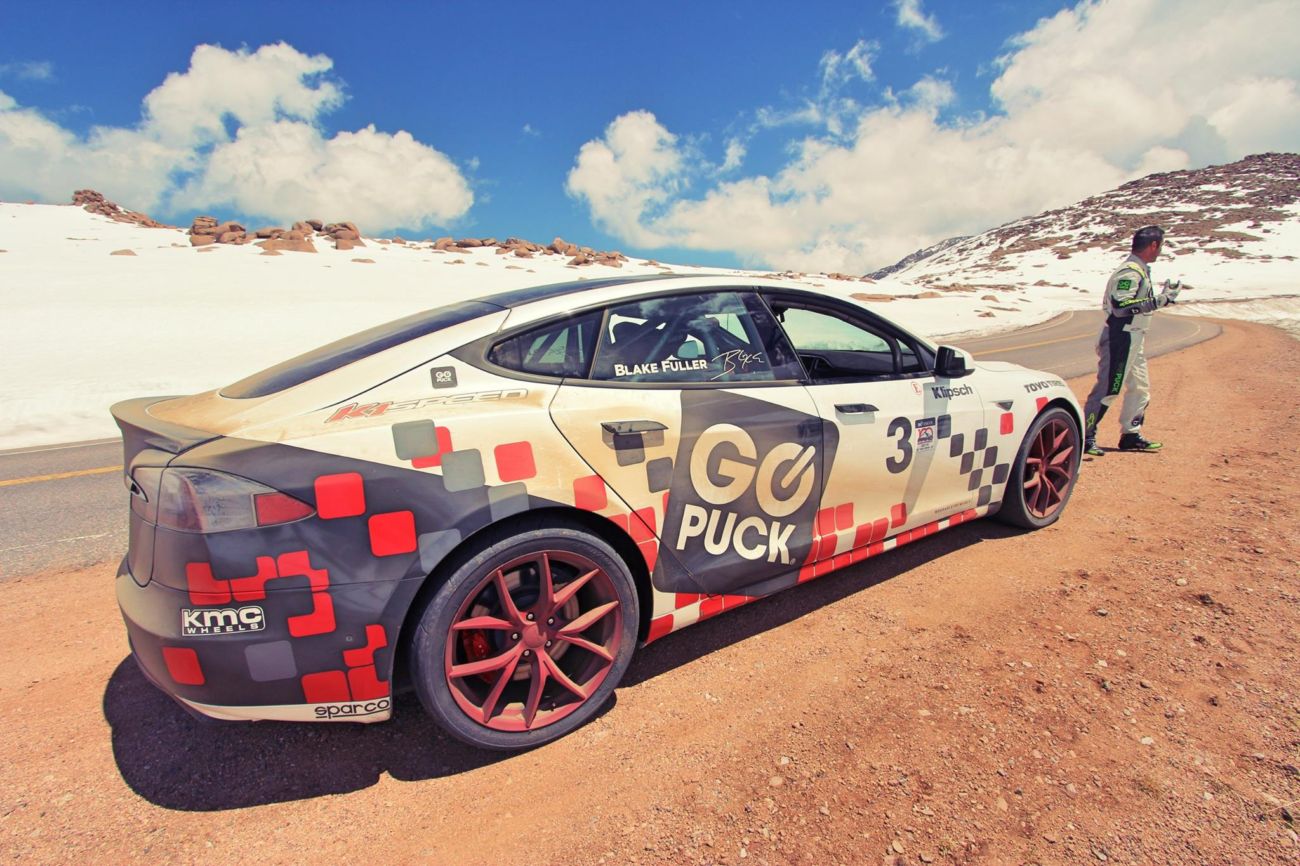 It’s only fitting to pin these two giants together for this momentous event. With fully electric, high-performance go-karts and 30 entertainment venues nationwide including an international location, K1 Speed is the leader in the industry. GO PUCK manufactures wearable, compact and durable power for all mobile devices. Designed by the award-winning lithium ion battery engineer who created battery that powers F1, NASCAR and IndyCar, GO PUCK is literally racing technology in the palm of your hand.

“To partner with K1 Speed is such an honor and speaks to the commitment of K1 Speed to not only be a premium family entertainment venue, but also a logical first choice for anyone with dreams of becoming a race car driver!” say Fuller. He continues: “Truth be told, prior to winning Pikes Peak Hill Climb rookie of the year in 1999 at the age of 17, I had spent more time in a Go Kart at venues like K1 Speed than in actual race cars!  Now, I’m stoked to see how the GO PUCK Tesla Racing Program can help raise awareness that racing at K1 Speed can lead to the developments of future drivers in electric racing programs like PPIHC or Formula E.”

“When you think electric cars you immediately think of Tesla. The same goes for electric go-karts and K1 Speed. When we heard about Blake’s PPIHC efforts, we immediately contacted GO PUCK to get involved. We were introduced to Blake and GO PUCK a few years back at X Games Austin during the Bucky & Friends Endurance Race. It was only a matter of time for both brands to connect on this electrifying project. We’re thrilled to be a part of this and look forward to Blake challenging the current electric-vehicle record in his custom K1 RaceGear suit,” says Marketing Manager, Andrew Palos.

With Pikes Peak just a week away, look for pre and post events with the Tesla Model S at K1 Speed Denver (Littleton, CO). The Denver center will also be hosting a GO KART. GO PUCK Challenge where racers will compete for the fastest lap times for a chance to win GO PUCK products and accessories. Soon you will be available to purchase a GO PUCK at any K1 Speed location nationwide. Visit the PPIHC FanFest on June 24th in downtown Colorado Springs and look for K1 Speed under the GO PUCK booth. Enter for a chance to win free races and receive discounts on Arrive & Drive racing.

GO PUCK is a USA based design and manufacturing company offering the only complete mobile power solution designed for active lifestyles by offering a system of solutions providing consumers, athletes, and professionals Mobile Freedom. Brought to you by the brain-trust behind Braille Batteries, the leaders in producing lithium-ion batteries for the elite auto racing industry, GO PUCK uses international-patented protected technology to produce modular, lightweight portable charger for mobile devices. With a unique mounting system to allow the power to mount to almost anything for backpacks to bicycles to roll cages, the GO PUCK is revolutionizing mountable and wearable power. For more information, visit http://www.gopuck.com

K1 Speed was founded in 2003 and is the nation’s largest indoor kart racing chain. Each facility boasts 50,000-90,000 sq. ft. of space, which feature real road courses, meeting rooms, snack bars and spacious lobbies with genuine racing memorabilia. Visitors can take advantage of a variety of different race packages to race against their friends or the clock. K1 Speed can accommodate 10 to 800 guests and offers a unique venue for corporate functions, team building events, birthday parties, bachelor parties or other private ceremonies. For more information, visit http://www.k1speed.com

K1 RaceGear was born in 2003 with the philosophy of offering products to our customers that we ourselves would be proud to use. At K1 RaceGear, we are racers ourselves, and we understand the value of buying quality racing products at a reasonable price. To meet the needs of our customers, we strive to provide quality racing equipment at K1 RaceGear – including racing shoes, suits, driving gloves, helmets, and more – to racers of all ages at a great value. Whether your son or daughter is just starting out in the sport or you have a life-long passion for racing, we have the products for you in our full line of K1 RaceGear. If you are interested in purchasing karting or racing equipment, including racing shoes, suits, and driving gloves, contact K1 RaceGear today, visit http://www.k1racegear.com