Talladega SuperSpeedway announces new TallaTaxi transportation. The TallaTaxi will be used for quickly moving fand around the large speedway grounds.

TALLADEGA, AL – Race fans sometimes find themselves in a need of quickly getting to various locations on property during a race weekend at Talladega Superspeedway, so NASCAR’s Most Competitive track has great news for those who normally travel by foot with the introduction of the all-new TallaTaxi service.

The TallaTaxi golf cart service, from Patron Transportation, will make its Talladega debut during the Alabama 500 and fred’s 250 Powered by Coca-Cola weekend, starting as early as Tuesday (Oct. 18) through Sunday (Oct. 23). For only $5 a seat, TallaTaxi will provide 24-hour transportation to take fans wherever they need to go, nearly anywhere on speedway property (excluding only West C campground).

To catch a ride on a TallaTaxi during race weekend, fans can call or text a pick-up request at 205-863-6737 or can flag down the unmistakable black and yellow checkered carts while they make their rounds around Talladega’s nearly 3,000 acres. 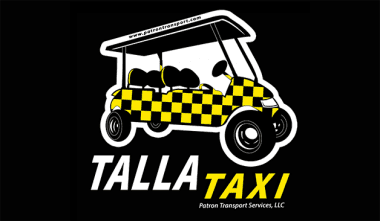 “Creating a one-of-a-kind fan experience has always been an important part of the events at Talladega, and TallaTaxi will provide a premium service to our thousands of fans who normally walk to their desired destinations,” said Talladega Superspeedway Chairman Grant Lynch. “Bringing the largest and most efficient taxi service to the largest and most competitive track made perfect sense.”

The speedway will continue to provide free tram and ADA shuttle services throughout the weekend as well, at select locations. 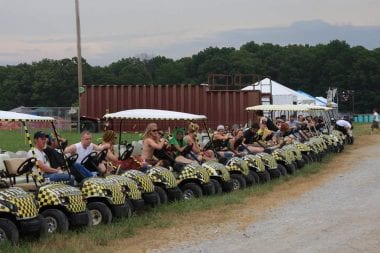 Patron Transportation debuted in 2005, and 10 years later, they have grown to the largest and most efficient event taxi service in the nation, working major events from coast to coast. Offering a safe and thorough taxi service to many festivals in excess of 75,000 patrons, they are the first and only company of this kind to consistently deliver service of this level year after year with a flawless safety record and excellent customer service.

Talladega Superspeedway renovation project announced at the cost of $50m