DAYTONA BEACH, Fla. (November 11, 2016) – NASCAR announced today that it will surpass 10 million competition miles on Sunoco Green E15, a biofuel blended with 15 percent American-made ethanol, by the end of the 2016 season. The achievement will be celebrated during the NASCAR Sprint Cup Series™ race at Phoenix International Raceway this weekend. The 10 million miles will have been accumulated across practice, qualifying and racing laps since the biofuel was adopted by the sport.

Six years ago, NASCAR entered into a groundbreaking partnership with Sunoco and American Ethanol, launching its long-term biofuels program to reduce emissions across its three national series. After an exhaustive analysis, Sunoco formulated Sunoco Green E15 to allow for a seamless transition, and the biofuel made its debut at Daytona International Speedway in 2011. All the ethanol for Green E15 is produced from American-grown corn at Sunoco’s ethanol manufacturing facility in Fulton, N.Y. 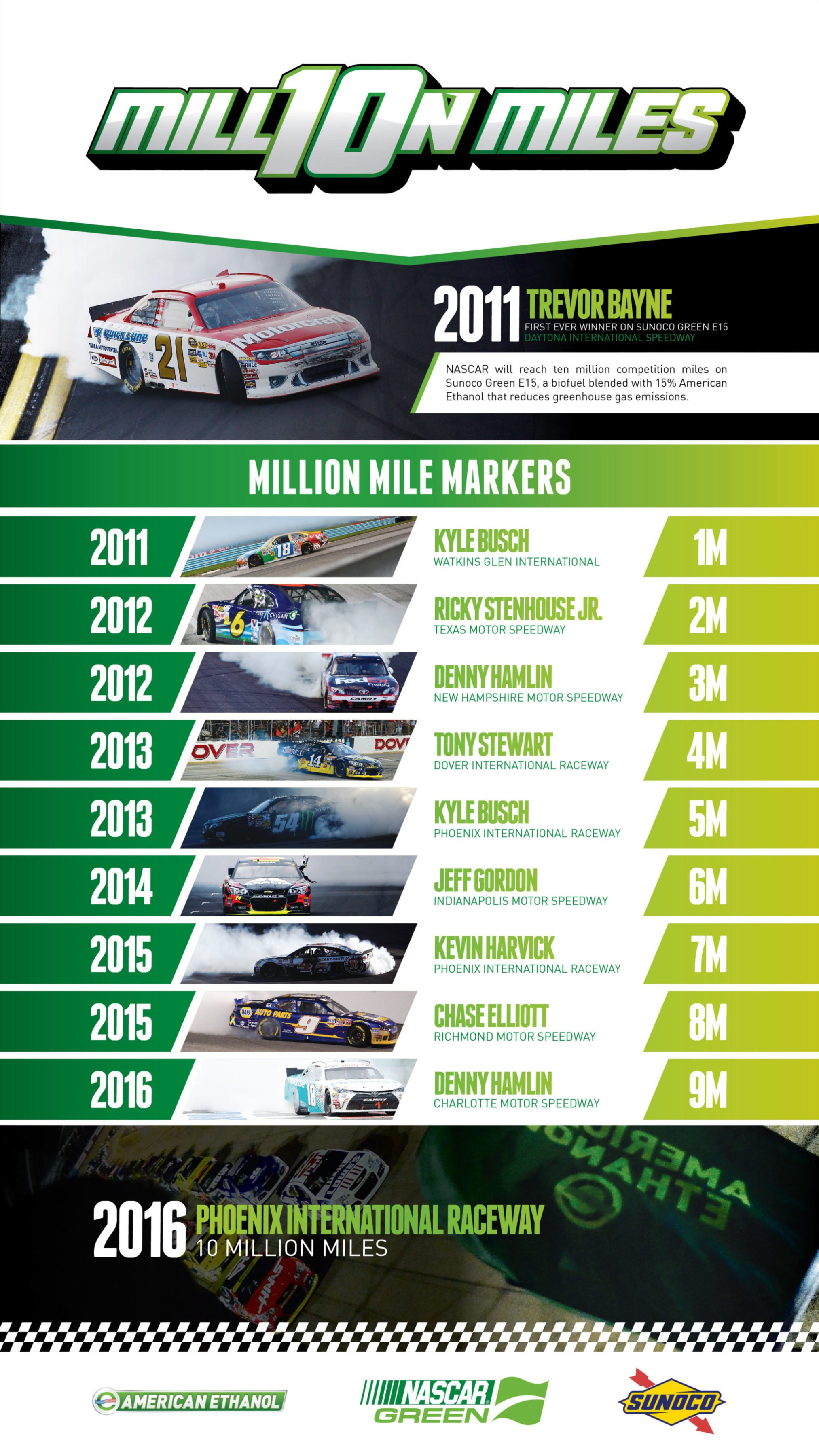 “As we approach 10 million miles on Sunoco Green E15 across our three national series, it’s evident that the renewable, higher ethanol blended fuel performs flawlessly against our rigorous racing conditions,” said Brent Dewar, NASCAR Chief Operating Officer. “This remarkable milestone is the result of an industry-wide commitment to demonstrate high performance racing with reduced emissions, while educating our fans about the benefits of sustainable and renewable American ethanol.”

Since transitioning to the biofuel, NASCAR has helped validate the fuel’s qualities in front of an audience of millions of NASCAR fans and is helping shift attitudes and behaviors around the use of ethanol. According to new research conducted in July, when compared to non-fans, NASCAR fans are more likely to support the use of ethanol blended gasoline to fuel NASCAR race cars, their own car, and cars on the road today to increase U.S. energy independence. Source: Custom Environment-Related Tracker commissioned by NASCAR and conducted by Toluna (July 2016).

“We are thrilled to reach this important milestone with NASCAR and to be a part of the effort to reduce the sport’s impact on the environment with Sunoco Green E15, while increasing horsepower and standing up to the most demanding conditions on the track,” said Emily Skor, CEO of Growth Energy. “Like their favorite NASCAR drivers, consumers are now utilizing a fuel with a blend of 15 percent ethanol. Americans have already driven over 500 million miles on E15. Today, nearly 400 stations across 28 states sell E15 and those numbers continue to climb. Consumer demand is on the rise because Americans are finding out that E15 is the right choice for their engines, their wallets and the environment.”

The move to Sunoco Green E15 coincided with the incorporation of more technology into NASCAR race cars. In 2012, the NASCAR Sprint Cup Series transitioned from carbureted engines to electronic fuel injection using an electronic control unit (ECU) – the first computer technology used in a NASCAR race car. In addition, the series moved from analog gauges to a digital dashboard this season.

“As a lifelong fan and a proud team owner, I am certain that the switch to an ethanol blend has been a great move by NASCAR,”said Richard Childress, Chairman and CEO of RCR. “We’re proud of our connection to the ethanol industry and all of the good that it’s doing for our country, and could not be more pleased to celebrate passing 10 million miles with the industry.”

During the pace car laps at the start of the race on Sunday at Phoenix International Raceway, NASCAR fans at the start/finish line will be asked to participate in a coordinated American Ethanol green flag wave to help commemorate the 10 million-mile achievement.

The Chase for the NASCAR Sprint Cup will continue with the Can-Am 500 at Phoenix International Raceway on Sunday, Nov. 13 at 2:30 p.m. ET on NBC, MRN and SiriusXM NASCAR Radio.