Heading into Homestead-Miami Speedway Toyota had a chance to make stock car racing history. They have now done it. Toyota has become the first foreign auto maker to win NASCAR Manufacture Championship.

At season’s end, Toyota led the 2016 NASCAR Manufacture Standings by 25 points over Chevrolet. Ford came in 3rd, 89 points behind Toyota. 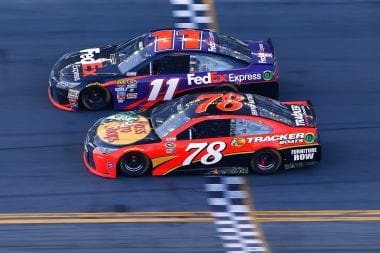 “Capturing our first Cup Series manufacturer’s title is a tremendous accomplishment, and one that has been a goal for Toyota since entering the series 10 years ago as underdogs in this ultra-competitive series,” said Ed Laukes, Vice President of Integrated Marketing Operations for Toyota Motor Sales (TMS), U.S.A.

He continued, “With the partnership of great teams like Joe Gibbs Racing and Furniture Row Racing, Toyota has been able to breakthrough and become the first different manufacturer to earn this championship in 13 seasons.

Toyota has now won manufacturer’s championships in all three NASCAR national touring series, and to have reached this amazing milestone really speaks to Toyota’s commitment to not only NASCAR, but also to motorsports endeavors around the globe. We’re proud of the effort put forth by each of our Toyota teams, and all of the Toyota team members that have allowed us to reach this goal.”