Sergio Marchionne hints on Dodge returning to NASCAR as Fiat Chrysler Automobiles CEO looks for the right partner. Marchionne spoke with NASCAR over the weekend at Daytona International Speedway.

Dodge exited NASCAR in 2012. Penske made the switch to Ford and left Dodge without a home. It’s not that they wanted to leave in the first place, they really had their hands tied. On top of that, they where also fighting off bankruptcy, which didn’t help any of the situation.

Ralph Gilles was the head of Dodge Motorsports as the manufacture pulled from the sport. But in 2012, he was quoted, “I don’t want to put this all on Roger. Ford put a very good long-term deal in front of him. We were kind of in a review mode at the time.” Basically stating, in 2012 Dodge was already thinking about leaving NASCAR but Penske making the switch was the final straw. 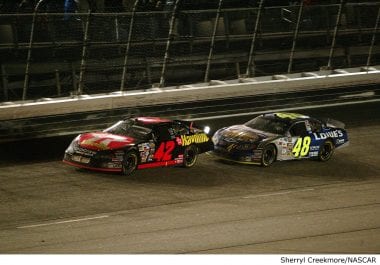 Ferrari had a big show at Daytona International Speedway over the weekend. A Ferrari-only show. The track is located in Daytona Beach, FL which also happens to be the NASCAR headquarters. Many worlds collided at the right time.

As Fiat owns Ferrari, it brought all the Fiat executives across the pond. That offered an opportunity for discussion. The three had dinner to discuss the possibilities of a return during the Ferrari Finali Mondiali.

Sergio Marchionne explained his interest in Dodge returning to NASCAR, “I talked to Jim France about this (Saturday) night.” He continued, “I was the one who made the decision to pull out of NASCAR. I am the guilty party at the table.”

Explaining the departure and a possible return, “In 2009, we came out bankruptcy and tried to race NASCAR, with the big bills and make payroll was a stretch. We are in a different place now. I think it is possible we can come back to NASCAR.”

They need the right NASCAR partner, “I think we need to find the right way to come back in, but I agreed with both Jim and Lesa we would come back to the issue.”

Jim France later confirmed that he had a meeting with Marchionne about bringing Dodge back into NASCAR’s top series.

Dodge is third in all-time NASCAR Cup Series wins. The manufacture has totaled 217 wins. A stat that only includes the premier series.

Dodge NASCAR Return in 2018 – If they Really Wanted, says Yates

NASCAR returning to Fairgrounds Speedway Nashville? SMI is still actively working on it

NEXT POST
Dale Jr Cleared to Drive in 2017 NASCAR Season