DAYTONA BEACH, Fla. (Jan. 20, 2017) – Five of NASCAR’s legendary competitors – three owners and two drivers – were enshrined via the 2017 NASCAR Hall of Fame Induction Ceremony. It was hosted in Charlotte, North Carolina, tonight during the Induction Ceremony held in the Crown Ball Room at the Charlotte Convention Center.

Watch the 2017 NASCAR Hall of Fame induction video posted below. 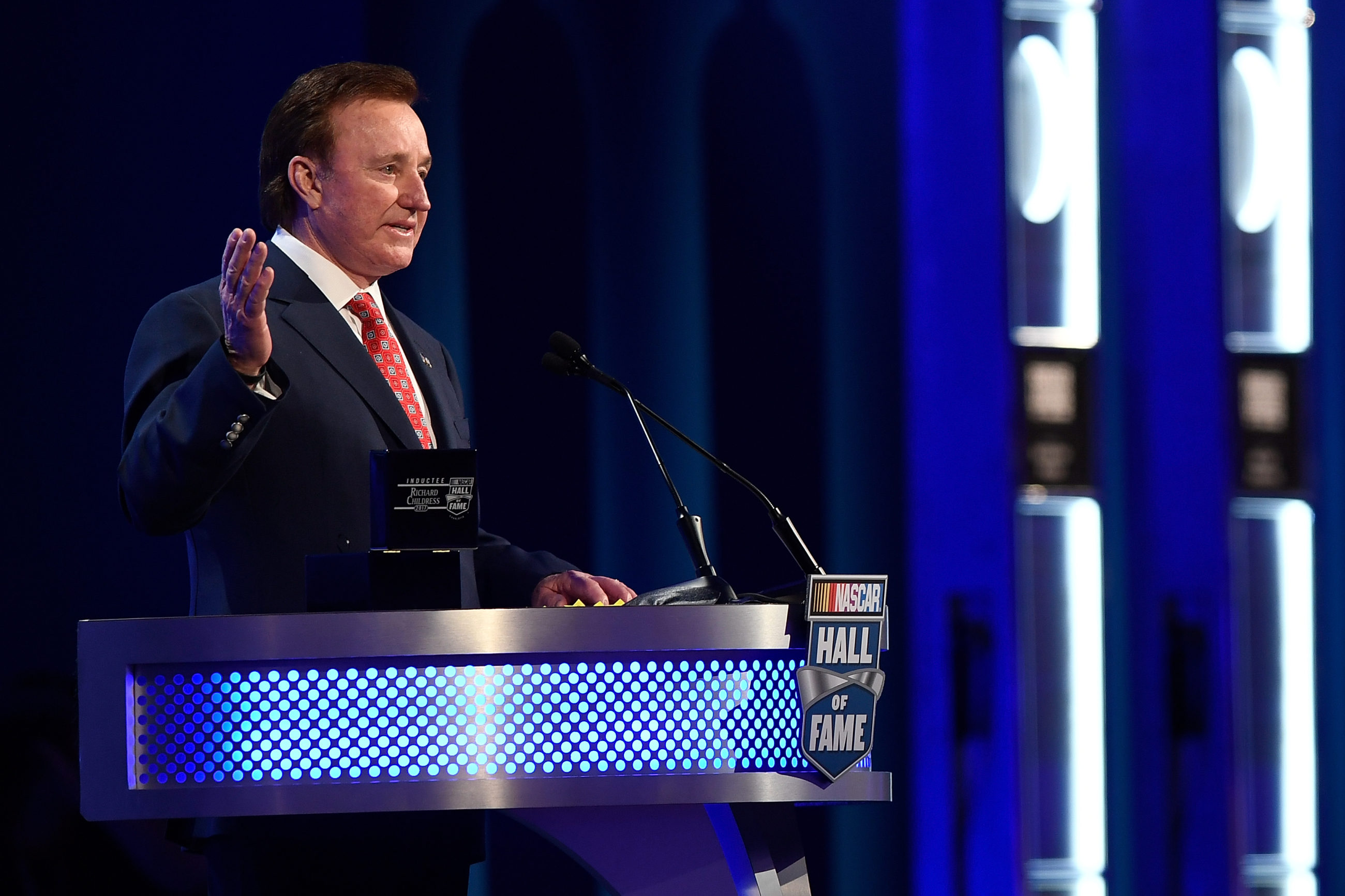 A man from humble beginnings, Richard Childress bought his first race car for $20 at the age of 17. He turned that purchase into a NASCAR dynasty, winning six premier series championships with NASCAR Hall of Famer Dale Earnhardt from 1984-2000.

“Only in America could a kid selling peanuts and popcorn at Bowman Gray Stadium have a dream of becoming a race driver someday,” Childress said.

He continues, “And then he goes out and buys himself an old ’47 Plymouth, pays $20 for it – that was the best investment I ever made – and have a dream of being a NASCAR driver someday, be standing up here tonight to be inducted into the NASCAR Hall of Fame. Only in America.” 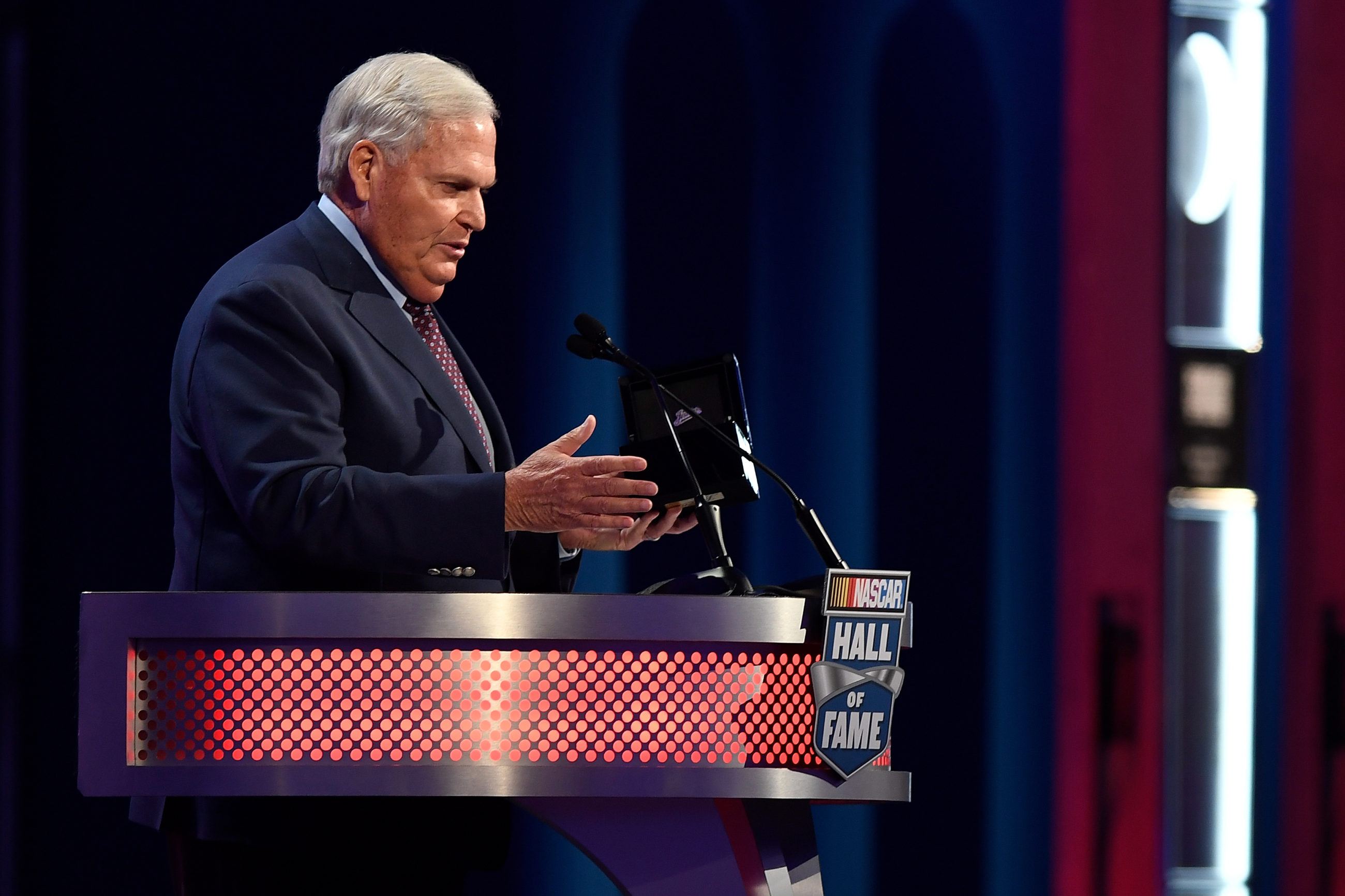 After winning three championships as the owner of a drag-racing boat team, Rick Hendrick founded “All-Star Racing” in 1984 – the team that would later become Hendrick Motorsports.

Hendrick Motorsports has a total of 15 NASCAR national series titles, the most in NASCAR history. Overall, it boasts 245 premier series wins.

“I’m the luckiest guy in the world because of my family, because of the friends I’ve met in this sport,” Hendrick said.

He continued, “I thank you, God bless you, and thank everyone who voted for me and all the fans because this is an honor that I will never, ever forget.” 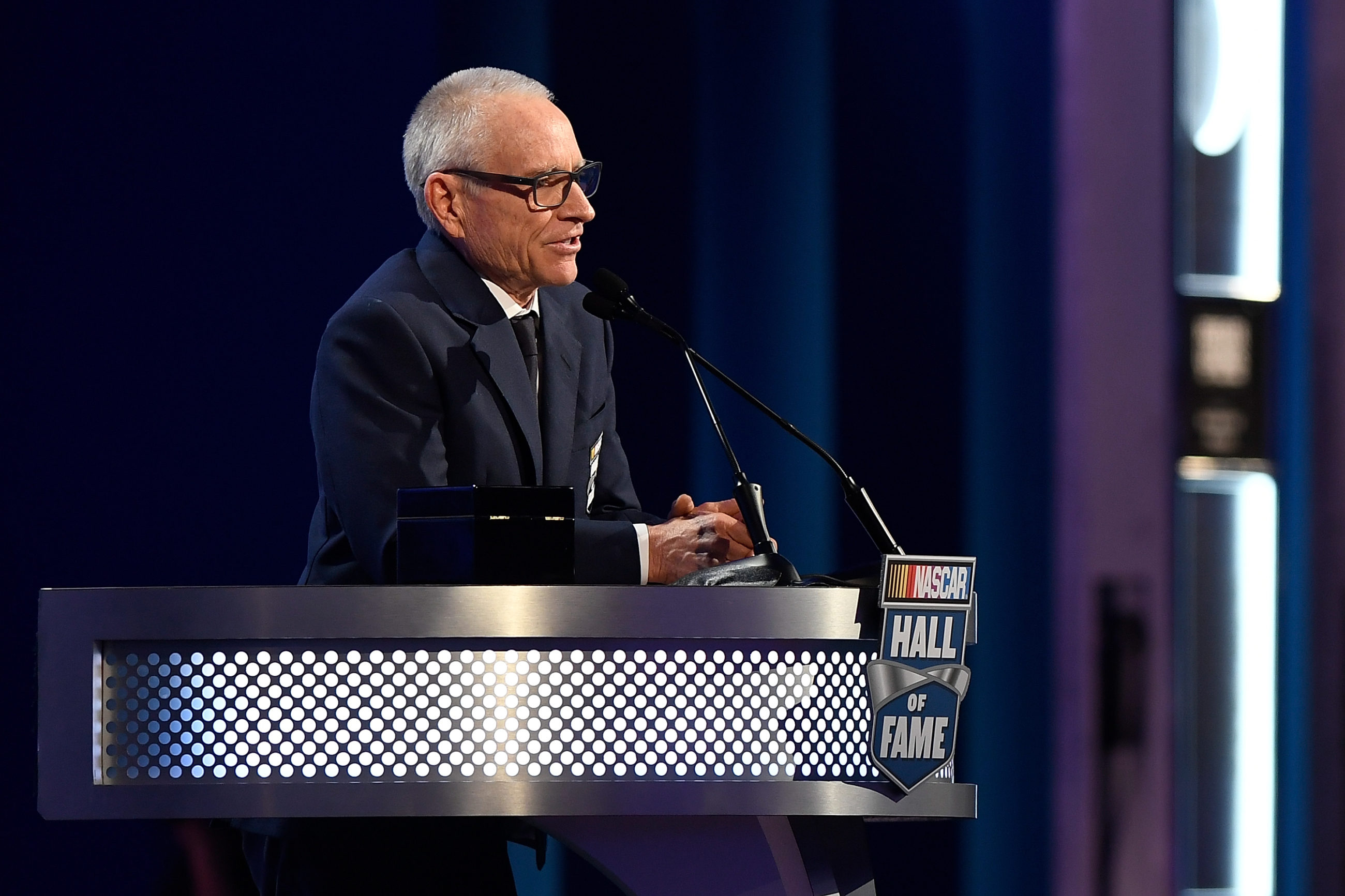 Successful at every NASCAR level, the Batesville, Arkansas, native visited Victory Lane 49 times in the NASCAR XFINITY Series and held its wins record for 14 years. He retired with 96 wins across NASCAR’s three national series – seventh on the all-time list.

“For every person that ever worked on any of our teams, I salute you,” Martin said. “This is your moment, our moment. The road was long, and sometimes the mountains seemed insurmountable. But in the end, here we stand in the grandest victory lane of all.  We made it to the NASCAR Hall of Fame.”

One of stock car racing’s earliest – and most successful – owners, Raymond Parks dominated the sport with his team in the late 1940s and early 1950s. He paired with mechanic Red Vogt to help Red Byron win the first NASCAR title (modified, 1948) and first premier series championship (1949). Known for always donning a suit and keeping his cars in pristine condition, Parks is credited for helping to transform NASCAR into a nationally recognized sport.

“But what really hit me, I think, was the first time I went to the Daytona International Speedway, I was sitting in the stands, and it hit me, because everything I had heard growing up, I could see all of them in the Streamline Motel (where Parks helped Bill France Sr. create NASCAR),” said Parks’ granddaughter Patricia DePottey, who accepted on his behalf. “I could see the cars racing around in the sand. I could just envision everything that he accomplished, and it was like all of the stories became real.”

Benny Parsons drove a taxi for a living in Detroit before embarking on his storied racing career. He won the 1973 NASCAR premier series title and finished fifth or better in the premier series standings in nine consecutive seasons (1972-80). Parsons won 21 races in 526 career starts, and tallied 283 top-10 finishes – a 53 percent ratio. He took the checkered flag in the 1975 Daytona 500 and was the first driver to qualify a stock car at more than 200 mph (200.176 in 1982 at Talladega Superspeedway). Following his driving career, he made a seamless transition to the broadcast booth as a commentator for NBC and TNT until his passing in 2007, at the age of 65.

“The most important thing about tonight for him would be the people and especially the fans, understand how much they meant to him and how much he loved each and every one of you,” said Parsons’ wife Terri, who accepted on his behalf. “You all have such great stories, and tonight is really a celebration of his life.”

Each of the five inductees had an inductor who officially welcomed them into the Hall: Judy Childress, Austin Dillon and Ty Dillon (wife and grandsons) for Richard Childress; Linda Hendrick (wife) for Rick Hendrick; Jack Roush (team owner) for Mark Martin; Kyle Petty (family friend) for Raymond Parks; and Dale Jarrett (family friend) for Benny Parsons. 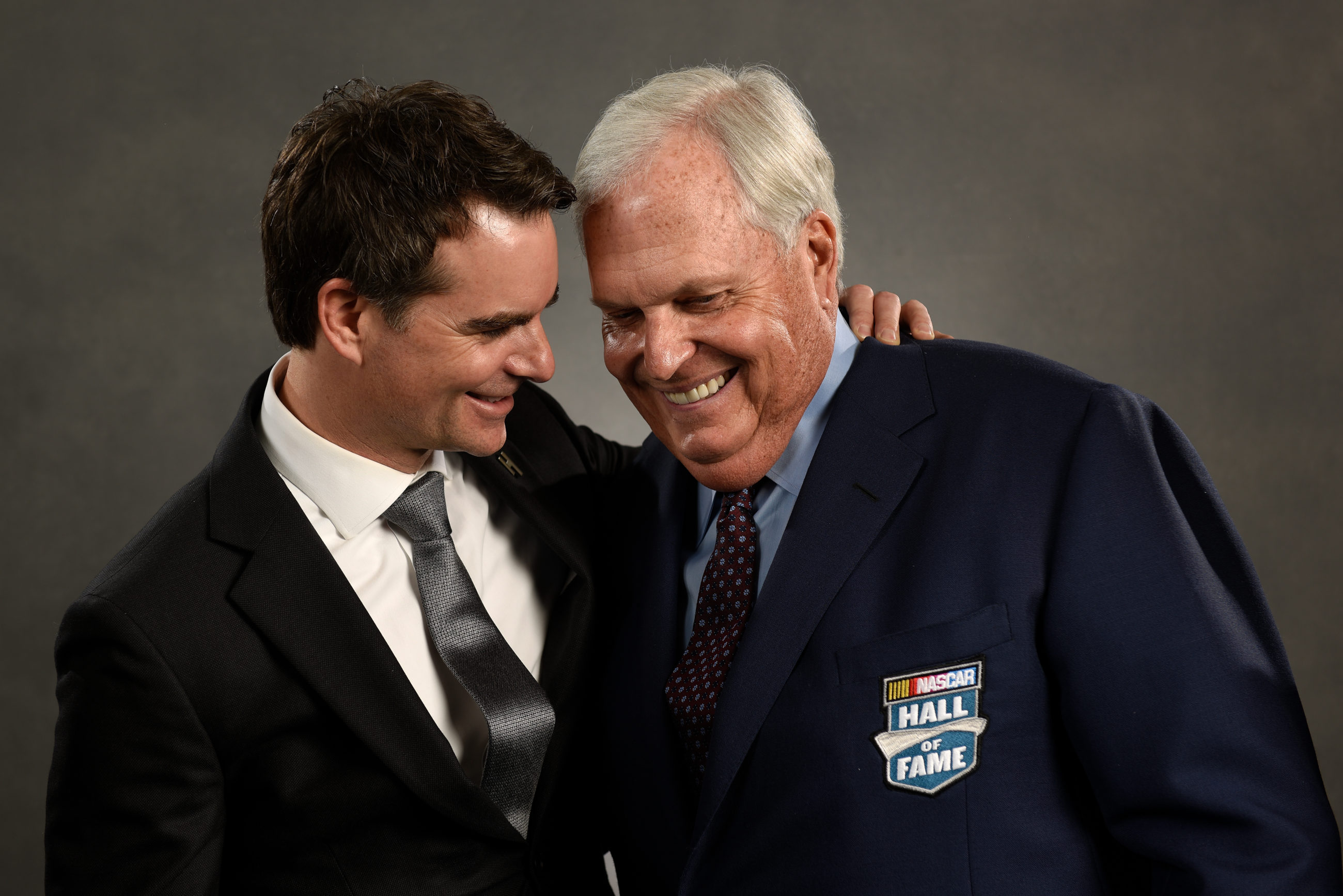 In addition to the five inductees enshrined today, H. Clay Earles was honored as the third recipient of the Landmark Award for Outstanding Contributions to NASCAR.

Earles built and opened Martinsville Speedway in 1947. It remains the only short track to host a NASCAR premier series race every year since the series’ inception in 1949. Built as a dirt track, Earles grew the primitive venue into a multi-million-dollar facility covering over 340 acres. Shaped like a paperclip, the .526-mile asphalt track is a crown jewel of NASCAR and known as the sport’s “Wrigley Field.”

A versatile storyteller, Phillips spent 48 years with the High Point (N.C.) Enterprise as a reporter and sports editor. He also wrote for Stock Car Racing Magazine for 27 years and commentated for 12 years on TBS. Known for his ability to transform drivers into heroes with his words, Phillips penned four books, including Dale Earnhardt’s autobiography “Determined,” which he co-authored with fellow NASCAR reporter Ben Blake. Phillips died in 2012 at the age of 74 from polio, which he battled his entire life.

The 2017 NASCAR Hall of Fame Induction Ceremony, hosted by Rick Allen and Krista Voda, was broadcast on NBCSN.

Based in Daytona Beach, Fla., with offices in eight cities across North America, NASCAR sanctions more than 1,200 races in more than 30 U.S. states, Canada, Mexico and Europe. For more information visit http://www.NASCAR.com and http://www.IMSA.com, and follow NASCAR on Facebook, Twitter, Instagram, and Snapchat (‘NASCAR’).

About NASCAR Hall of Fame

The venue is opened 10 a.m. – 6 p.m. seven days a week and has an attached parking garage on Brevard Street. The five-acre site also includes a privately developed 19-story office tower and 102,000- square-foot expansion to the Charlotte Convention Center, highlighted by a 40,000 square-foot ballroom. The NASCAR Hall of Fame is owned by the City of Charlotte, licensed by NASCAR and operated by the Charlotte Regional Visitors Authority. www.NASCARHall.com.

NEXT POST
2017 NASCAR Format Change will be Announced Today