I was there, standing 5 feet from the damaged Josh Richards XR1 machine. I know Mark Richards was very upset. Understandable, given his son just went from leading the race, to the pits with a damaged race car. However, now that I’ve seen the pitroad video, the other piece of the ‘upset’ puzzle is clear.

Josh Richards, started on pole February 19th at Bubba Raceway Park. He lost the lead at the start, then took it back. 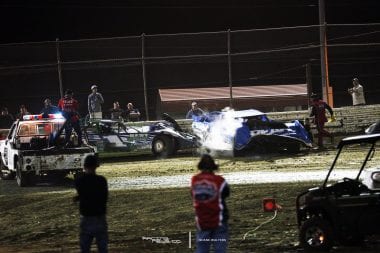 Josh Richards was cruising to a win. Don O’Neal looked to be the only car that could challenge the green Rocket Chassis #1. However, both those cars were suddenly taken out as a lapped car spun across the track. It left nowhere for either driver to go, ending a chance at the win for the two fastest cars on track.

The Don O’Neal #5 car was carried off track, smoking and on the hook. Josh Richards drove to the pits. The entire Best Performance Motorsports team surrounded the car. This pitlane was in the infield of the Ocala dirt track. Naturally, 60+ other people also fenced the car to watch the show.

Brandon Sheppard filled the missing piece. He drove the Rocket XR1 house car to victory lane that night at Bubba Raceway Park. However, 20 laps before his final lap pass on Scott Bloomquist for the LOLMDS win, the other side of the Rocket Chassis team wasn’t having a fantastic night. 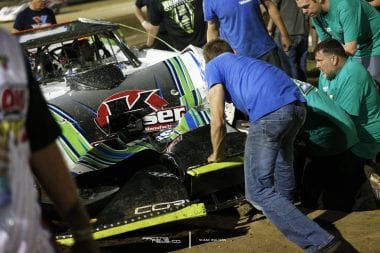 While the Josh Richards machine was on pitroad, a crew member from a competing chassis manufacture saw an opportunity to become a spy. As the team was busy fixing front end damage, said crew member, bent over and took a peak under the rear end of the racecar.

Low blow. That’s not the moment to try and steal a setup or any design notes. That particular crew member was really just asking for trouble. I’m sure he knew that. Though, he did look surprised after the push from Mark Richards, I’m just not sure why that response surprised him.

In the opinion of most people reading this, Mark Richards responded to the situation correctly. However, Mark himself doesn’t feel he did and has since issued the apology below. 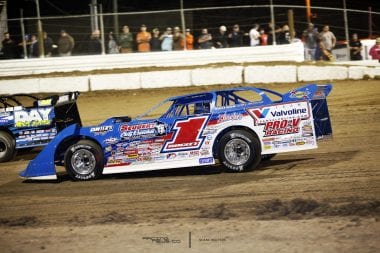 Mark Richards Racing, Inc. President Mark Richards would like to issue an apology for his behavior recently captured on Lucas Oil Racing TV during the February 19th race at Bubba Raceway Park in Ocala, Florida.

“I am an intense competitor and I was wrong for pushing away a crew member from a competing chassis company. In the heat of competition you can make a mistake, and I did.”

He continued,”I should have approached the situation in a different manner. Since then I have apologized to the crew member and we are both good with it.”

Mark Richards Racing, Inc. wishes all of our competitors the best of luck and looks forward to the competition on the race track in 2017.