After this weekend, the new Boys Have It acceptance levels have moved in a very clear direction. Not long ago, NASCAR took a few hands-off approach, allowing drivers to police themselves on the race track.

RELATED: Boys Have At It Dangerously Entertaining?

That is no longer NASCAR’s approach to their on-track officiating. The days of repairing a mangled race car, just to wreck the leader, are gone. The days of wrecking someone on-purpose, in any retaliation situation, are gone. 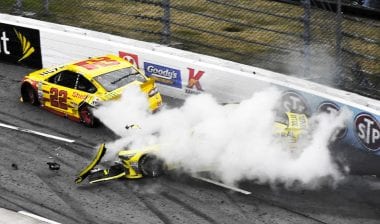 NASCAR set clear rules in 2015. Matt Kenseth drove a broken racecar to the garage at Martinsville Speedway. They fixed it, just to take it back out and purposely wreck it again, intentionally wrecking the leader of the race. That leader was interestingly enough, Joey Logano.

That bold retaliation forced Joe Gibbs Racing to find a replacement driver. Matt Kenseth had the book thrown at him, Behavioral Penalty (Sections 12.1, 12.8). A two race suspension was handed to Matt Kenseth as well as a 6 race probation.

You could make the argument that NASCAR’s Boys Have It rules changed as early as 2012. When Jeff Gordon took a lapped down car on the track, to wreck Clint Boywer. Jeff Gordon was slapped with a $100,00 fine as well as NACSAR probation.

The 5 minute repair rule was activated in 2017. It surfaced for two reasons. 1) In an interesting twist of the norm, NASCAR is no longer a fan of debris cautions. 2) NASCAR has a ‘somewhat new’ zero tolerance policy on intentional wrecking competitors. The 5 min repair rule makes it very hard to return a wrecked car to the NASCAR track in search of a bullseye on another competitor.

Kyle Busch, then took a second to think about his next move. Once he made his decision, Kyle Busch b-lined right over to Joey Logano and threw a punch, without a word spoken between the drivers.

NASCAR has no problem with that driver-to-driver fight. Zero. In other words, ‘Boys Have It’ is no longer defined as settling scores on the race track using 3, 500 lbs racecars. It’s now off track, via fists on pitroad. At least the rules are clear now.

This morning, NASCAR Executives offered their thoughts on the fight. In the eyes of NASCAR CEO Brian France and NASCAR Executive Steve O’Donnell, it was an “understandable” reaction displayed by Kyle Busch.

So in other words… NASCAR is now saying it’s ok physically attack someone on pitroad. Just don’t do it from behind your racecar on our race track. Which I actually somewhat agree with. These are racing drivers, not robots. There’s no need to fine someone for showing the raw emotion stimulated from being a weekly NASCAR competitor who suffered a bad day at the hand of someone else.

This is a sport. Fights happen in any sport. I suppose with the exception of curling. I know someone out there just read that, they are itching to prove me wrong about the curling comment… Pic or it didn’t happen!

NASCAR does however, have an issue with entire crew’s jumping on top of a single driver. Steve O’Donnell stated no penalties were expected for either driver. However, he said nothing about penalties to crew members. That could very well be announced, on Wednesday.

With that said. We may see more than crew member penalties on Wednesday. I wouldn’t be surprised if NASCAR creates a new rule preventing crews from climbing over the pit wall for a given duration after the checkered flag.

Or perhaps an easier way of policing the same thing would a 3rd man in rule. The 3rd man in rule is used across Hockey of all levels. It basically keeps the fighting as a man-to-man conflict, instead of the entire team jumping one guy. The 3rd man to join the fight usually ends up with the harshest penalty, a collection of penalties. Stacking them increases the penalty time for the 3rd man in, more so than the guys who actually started the fight.

NASCAR enforcing a similar rule would be a very good idea. 10 full grown, former football players, jumping on top of the fun-sized Kyle Busch is dangerous. Far more dangerous than a single punch. In my mind, that the equivalent of using a weapon.

Fighting is normal in sports and unless someone places charges, it’s also legal. Hockey, Baseball, Basketball, anywhere. In hockey it’s not uncommon to see a mutually agreed upon, one-on-one battle to dust of a bit of frustration and of course to entertain the fans. At least the NHL does it right.

NASCAR has changed the way they tech the splitters, as teams found a loophole