You can do that. Read below as the iRacing staff details the updated safety rating system, early access and more. Oh by the way, there’s also a new video, released today. Watch that below, it highlights an adjustable sprint car wing.

(iRacing) – We just wanted to provide an update in regard to the “dirt” software build. It is still on track for next Wednesday, March 29th. Everything is looking good for the release on that day and we are very excited about it. A lot went into the development and we hope you enjoy it. In the meantime, we are working on another video today showing race footage of the winged sprint cars. 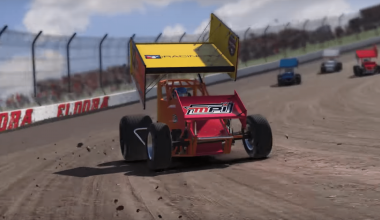 We are planning on putting the dirt content for “pre-sale” this coming Monday. If you have any interest you are welcome to purchase early. There will be 5 pieces of dirt content for sale. All the content will be priced at the standard price of $11.95. (We are using the lower tier pricing for the tracks.) Don’t forget, add a 6th piece of content and you will get 15% off. If you buy 3-5 pieces of content you will receive 10% off.

The reason for the pre-sale is with that much content, it will help spread the traffic AND you will be able to test the new content in our offline Test Drive feature during the update. Within the first couple hours of the maintenance period, we’ll provide members with early access to pre-ordered and free included dirt content via the Test Drive feature. Follow us on social media for notification for example at @iRacing on twitter.

You will still have to download the new content during the maintenance period. The update will likely take several hours. It will be good chance to get some test laps in with Dirt before you get on track with others. That said, we sure wouldn’t mind if not everyone jumps on to update all at once. Take your time, it will help everyone!

Speaking of that (updates/downloading), we often receive messages that we need to buy more servers or upgrade to fiber and things along those lines. I assure you we have plenty of high-end servers, fiber and state of the art networking and none of that is a bottleneck. We wish it was that easy to just buy more/better. It is typically the distribution of the massive data/content that is the bottleneck. We contract with the same high-end data distribution network (Akamai) as iTunes, Microsoft, ESPN, NBC Sports, Adobe, etc. It just takes some time unfortunately for the data to get distributed and downloaded globally. 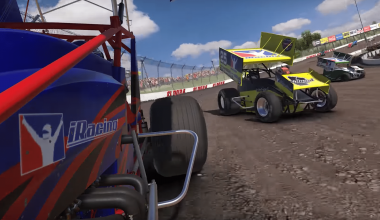 Back to dirt. The 5 pieces content going on sale will be the tracks Williams Grove, Eldora and Volusia. All the dirt tracks have day and night lighting. The cars will be a Late Model which will include three versions for the price of one. A Limited, Pro and Super Late Model.

The second car for purchase will be a Winged Sprint Car which also will include three different versions in the car package for the price of one including the 305, 360 and 410. Additionally we will be granting free dirt content including a dirt version of USA Speedway, a Dirt Street Stock, and a Dirt Legends Car.

Last but not least dirt versions of the Camping World Trucks (Silverado and Tundra). If you already own those vehicles, you will have the dirt package for free. They are not separate dirt vehicles, it is just that when you are on Dirt, you will have the dirt package for example when the NASCAR series goes to Eldora on the schedule. You can see all the dirt content here: http://www.iracing.com/dirt/

A few more things to keep in mind on Dirt. We made a few adjustments to safety system. Because dirt cars are meant to be sideways in corners, we adjusted the out of control spin incident well pass 90 degrees for dirt, but you can still get the incident if you do a serious spin.

Additionally, we moved heavy contact to 2 points instead of 4 points like it is on pavement since there is more natural contact in dirt racing. Everything else is the same for incidents and the math is the same in calculating safety rating and iRating. It is still our hope to create a separate license for Dirt and some preliminary work has started in that regard.

Dirt racing is much different than pavement racing. There is much more to it than throwing the car in the corner. To be blunt, it is hard and takes hundreds of laps of practice to get it but it is very fun and rewarding as you progress. I’m not any good at any type of sim racing but I really have struggled not driving dirt like I do pavement. The pedal control overall is a bugger, keeping the pedal down (mostly) through the corners on a short track, the timing of the brakes and steering, the dynamically changing lines and conditions of the dirt is difficult to be proficient never mind master. Even going down the straights you have to concentrate, that car wants to go left big time.

It is critical to practice. Watch the Chris Bell video if you get a chance on our YouTube Channel, it is excellent. We will be releasing much more in the coming days and weeks about dirt racing including tips and pointers from experienced real world drivers (and sim racers). Be patient and help each other out like you always do. That is what is great about this community. Most of all, have fun.

There will be several other nice little non-dirt additions that will be in the “dirt build” next week but this post is long enough. Additionally, we are pretty excited about our June Build. Contrary to popular belief we have been working on many other things beside Dirt.

We will be watching and listening to your feedback on dirt (and everything else) and looking for ways to improve as always. I also wanted to thank our testers, both our usual testers and the new folks that helped that have real world dirt experience. They were a huge help for Dirt and we simply could not have done it without them. Also a big thanks to our licensing partners across the board. It also would not be possible without them. Most of all, thanks to all of our members, we definitely would not be doing this without you!