I have big news to share on the iRacing dirt track racing game that’s in development. The new dirt racing sim racing section of the popular online racing service is very close to release. So close, that Rico Abreu, Kevin Swindell, Clint Bowyer, Tyler Hudson and others are now testing it.

When is iRacing dirt coming? As of January 18th, they are now in alpha testing. With that said, extremely soon.

Alpha testing means they now have a working product. A product that they are comfortable enough to place into the service for testers to finally race side-by-side. It’s the final step before releasing the dirt racing game to the public.

Tyler Hudson talks he new job at iRacing, “Just this week I accepted a job at iRacing working in the customer service department working with Nim, Susan, Angela and the rest of the team including helping Shannon as well with the WC series. I am very excited about it and chomping at the bit to get going. I look forward to doing my best to help iRacers for many years to come. I also already started to get some employee perks. The guys let me try out the dirt content last night and after sending Steve a wall of text about it he thought it would be a good idea to post it in the forums! I’m also told Dirt is going to all alpha testers this week.” 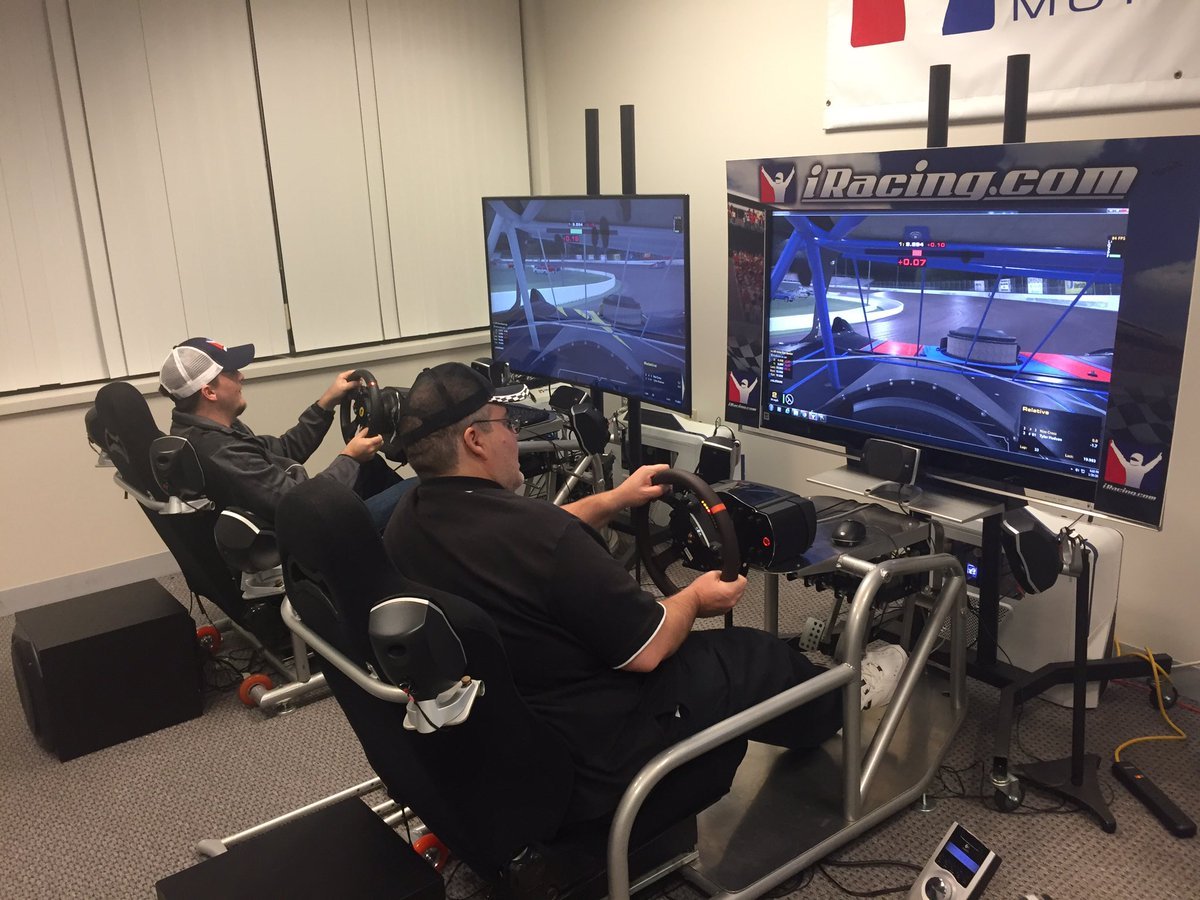 Tyler Hudson has more than just online racing experience. He’s also raced real life racecars. Most of that real world racing has been done on a dirt surface. That makes him a very good iRacing dirt tester.

He compares the iRacing dirt racing game racecars to real world dirt cars, “First, let me start by saying most of my real world racing experience is on dirt tracks, from karts, mini stock and street stocks to late models. Not an extraordinary amount, but more than any other form of racing. So I can honestly say that climbing into iRacing’s version of a dirt late model took me by a huge surprise. From the start I had the sensation I was back in my race car; not from the adrenaline rush as much as the fact that the driving sensation and feedback were like no other car I’ve ever driven in the sim.” 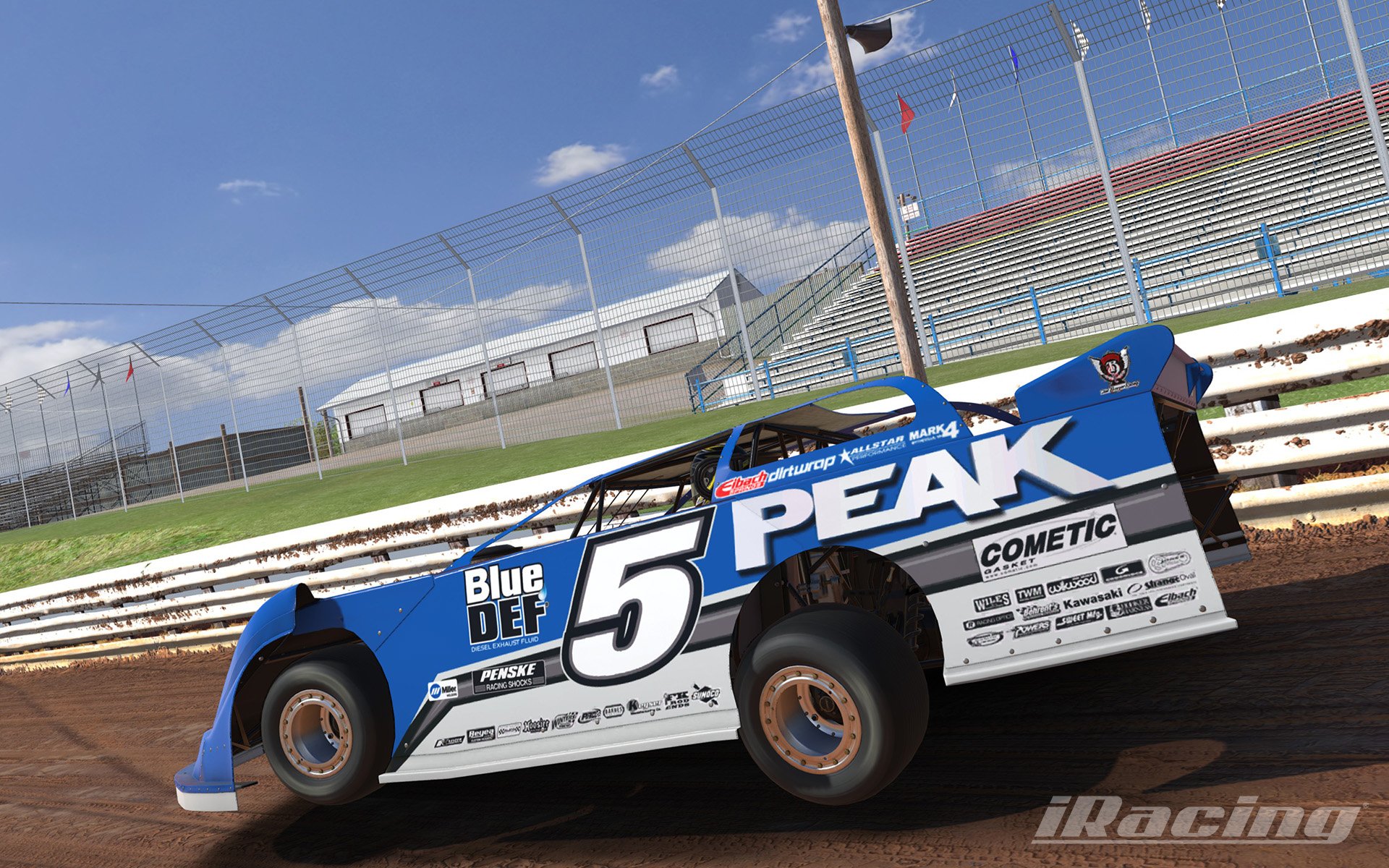 iRacing isn’t after controller type racing. They are after simulation of real world racing. Sim racing drivers are required to use a wheel. There’s no arial driving view, you’re forced to drive from the cockpit view. These are all things that make the upcoming iRacing dirt track racing game so awesome!

Another big part of the service is setups. Just like real world racing, you need to build a good setup to win. Some classes have ‘fixed’ setups, where everyone runs the same setup on an equal playing field.

Other classes are far more realistic, some drivers in the pro series even have crew chiefs. In the open classes, you build your own setup to fit your own driving style. Plugging in another drivers setup doesn’t necessary mean it’s going to work for you. Custom built iRacing setups are a big key to winning in any Open division.

Tyler Hudson talks iRacing dirt late model setup, “I’ve seen a lot of forum posts by people worried by some of the pictures that the late model won’t “get up on the bars.” Well let me tell you, it took some messing around in the garage, but it does. I haven’t found a way to make the car as far up on the bars as I’d like, but maybe that’s another item in development — or for a crew chief way better than me! ”

Hiking up the left front on a dirt late model car isn’t necessarily fast. In fact, I’d go so far to say, it’s not fast. But it does look cool. It’s very exciting to know that the iRacing setup sheet mirrors the real world setup sheet. Meaning, if you run a setup in the real world that hikes the left front up, you should be able to do the same thing on the new dirt racing game.

He continued to talk on iRacing dirt setups, “I was able to twist the rear end and float the left front – everything you see in pictures of real race cars. I’m telling you guys, I am amazed at what iRacing has done. I am thrilled to be a part of it, to help develop it and I can’ wait to see how much further we can push the envelope in motor sports simulations. This is ground breaking stuff: No other game on the market has even scratched the surface at what these guys have already done with dirt – and it’s getting better every day”

While you don’t want to do this, it’s very impressive that you can. It says more about the soon to be released iRacing dirt racing game than anything else. 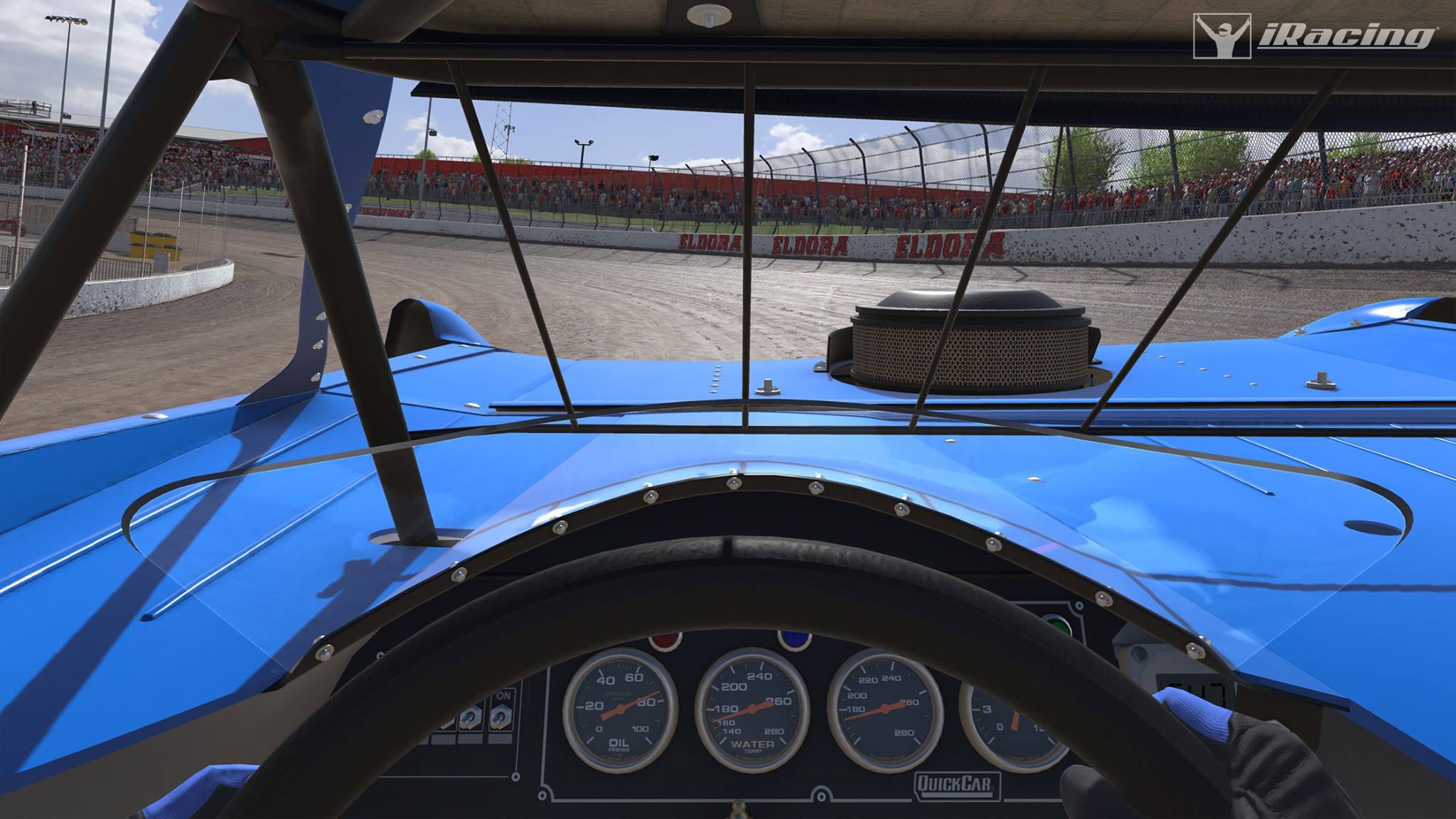 One of the hottest topics on the new dirt track racing game build is the track surface. That’s a crucial part of what brings millions of fans to dirt tracks across the world. Changing track surfaces force drivers to search for grip.

Hudson talked the iRacing dirt surface changes, “The track changes…. A LOT, visually and grip wise. That is a huge part of what makes dirt racing what it is, so you’ll be happy to hear that. You legitimately have to search for moisture in the track for grip. After 10 laps around the bottom at Eldora, the grip had fallen off by half a second and – visually – you could SEE the track change color from wet to dry dirt.”

Unlike asphalt racing, a little water makes a fast dirt groove, “I followed the moisture every lap until I was up by the wall. Then I went back to the bottom and was 3 tenths slower than up top where it was still a little damp. Eventually, I had gotten all the initial moisture out of the track from the bottom to the top, and virtually from the inside wall to the outside wall ran almost identical lap times. This will be great for searching for grip and racing. ”

A cushion is important in any dirt track racing game or in real life track prep. Fans have been critical of iRacing on the topic. However, while the cushion hasn’t been shown in previously released dirt racing game screenshots, it’s there. They’ve always said it’s there, it’s just not visible in the graphics. That area is still in development.

Tyler Hudson confirmed the dirt cushion, “Oh, but that’s not all. I backed out, set the track state to 100% and went back out. THERE’S A CUSHION!! I couldn’t really see the cushion, as I understand that’s still in development, but boy you sure can feel it! And the grip it provides will make dirt racing on iRacing genuine, authentic and as real as it gets.”

iRacing CEO Steve Myers shared his own update on the dirt track racing game surface, “As of last night Dave K has put in one of the last big items that we needed at least a first pass at before we start officially testing dirt. This project was having the physics actually moving the dirt on the track. We still have a ton of things to tweak and potentially implement now that all of the systems are talking to each other but now we actually can do that!” 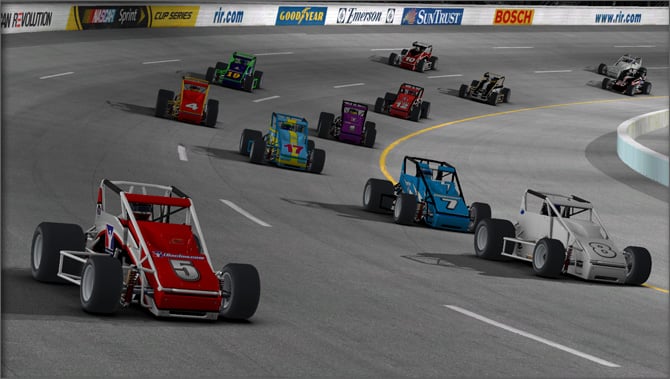 However, last week Steve Myers slipped in a new announcement on iRacing dirt cars that will be arriving on the service shortly. A non-wing dirt car is also going to be used for the online dirt racing game.

Steve Myers talks about the dirt track racing game non-wing sprint car, “I should add that anyone that drives a 410 unwinged dirt sprint car in real life needs their head examined. I crashed 5 out of 5 times before turn 1 trying to turn a lap yesterday before my surgically repaired shoulder called it quits. All of the sprint cars are mental but that one is just insane….”

Tyler Hudson tested more than just the iRacing dirt late model. He mentioned that iRacing is developing many cars for the dirt. We haven’t heard much about the road side, the rally dirt racing game. However, Tyler Hudson hinted that he also tested the new Ford Fiesta.

Tyler Hudson talks about the various iRacing dirt cars, “There is so much to say about the many different cars iRacing is developing, but I’ll make this as short as possible. These guys have nailed it. Sure, there are some minor issues as with anything in development, but they blew this one out of the park. Maybe it’s because we dirt fans/racers have been left out for so long, we haven’t had anything worth playing since the PS2 game World of Outlaw Sprint Cars or Dirt to Daytona, but believe me, this is the real deal.”

There hasn’t been a screenshot released yet of the iRacing dirt non-winged sprint car. However, I’m sure it will look very similar to the asphalt version, with a slightly taller ride height.

A release date for the new dirt racing game hasn’t been set. However, given the dirtcars are now in alpha testing, tells you we are getting close.

Generally, new content will come every 3 months, at the end of each season. New content generally pairs with the new build. However, there’s a high demand for dirt racing online. iRacing has stated multiple times that if it’s ready, it will be released. Meaning, that do not intend on waiting until March to release it. If it’s done before March, it will be released.

The iRacing dirt track racing game has all the signs of being released February 2017.