iRacing dirt content will be made available on testdrive.iracing.com sometime after downtime begins at 9AM EDT / 13:00 UTC tomorrow. We will post here once it’s live.

You will be able to test drive any content you have pre-ordered, as well as the Dirt Street Stock, Dirt Legends car, and dirt USA International Speedway.

If you want to test drive the dirt winged sprint car and late model during tomorrow’s downtime, you’ll need to pre-order it before 9AM EDT. The same goes for Eldora, Williams Grove, and Volusia.

The long wait is over! 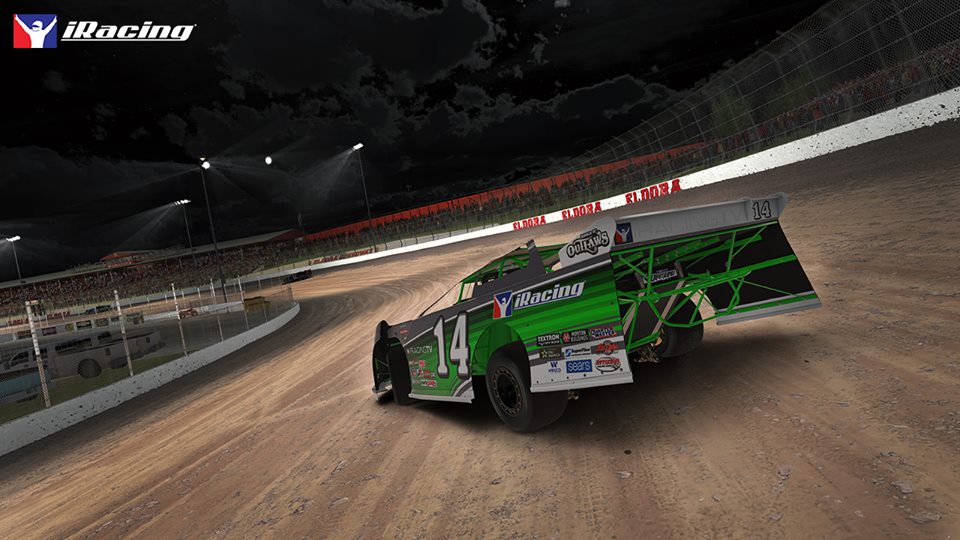 The long wait is over!

Website
– Fixed the “Featured Answers” section of the Support page.

SIM
– Fixed a bug where newly created lap files for this season would not show up in the comparison lap file selection dialog.
– The “reduceFrameRateWhenFocusLost” and “muteWhenFocusLost” settings in the “app.ini” file have been renamed by placing an “_” before “WhenFocusLost” in their names, and both settings are now defaulted to 0. This means that when another program, or Windows itself, pops-up a notification while the Simulation is running, the Simulation will no longer reduce its drawing to a very low frame rate, or mute its sounds.

Dirt
– Dirt is finally here!
– Dirt race tracks are incredibly dynamic puzzles, changing their surfaces every lap as cars skid, scrape, and push dirt around. All these particles and the fluid nature of the track surface demanded a new particle code system, an artistic overhaul, and realistic audio to cover the vast range of variations these tracks present. We’ve implemented methods to cover the full range of wet to dry dirt, and the full spectrum of densities racing dirt presents including hardpan, loose, compact, and prepared racing surfaces. Finally, we’ve also designed the track surface itself to function like dirt racers can expect, whether it is pushing the cushion, gaining grip in certain areas, or forming a blue groove. Up and down the circuit, the vastly complex and seamlessly layered combination of track conditions creates an exhilarating experience.
– The particles, tires, and surface sounds are dynamically updated using hundreds of debris sounds and scores of tire rolling and skid sounds. These are dynamically adjusted to cover the full range of track conditions to reflect the wetness or dryness of the dirt, and to let you know when you’re driving on any combination of hardpan, compact, or loose dirt. We even hurled dirt at helmet visors to get the recordings we required!
– For the initial dirt release, it is best not to run non-dirt cars at the dirt tracks. This is for a couple of reasons. One, most of the non-dirt cars have slick tires, which do not work well at all on the dirt surface. Two, some of the cars are not yet updated to check for the new dirt track types and will fail to load at the dirt tracks. We’ll work to rectify the failure of cars to load, but it is not likely that you will be wanting to drive cars with slicks at a dirt track anytime soon. Dirt tires are significantly softer and have much more tread pattern than even a normal passenger car tire. So even cars with treaded tires (e.g. the Skip Barber car) do not work well on dirt. Finally, most of the dirt cars allow much lower tire pressures than the pavement cars, which additionally helps them to work.
– – So if you would like to try dirt track oval racing, please try it in a dirt track car! The new Dirt Legends car and the Dirt Street Stock are available to all, as is USA Speedway, newly covered with dirt.
– A brand new Pace Truck has been built and hired to manage all races at dirt ovals to create a more authentic safety vehicle experience at these tracks.
– Due to the intense nature of the graphics needed for Dirt Racing, it is recommended that you keep “Render Dynamic Track Changes” enabled, and have your “Shader Quality” set to Medium or above, otherwise you will get a notification warning you about your experience.

Spotters
– Fixed an issue that would have left your computerized spotter disabled if a teammate left the server while they had indicated that they were acting as your live spotter.

Dirt Legends Ford ’34 Coupe
– NEW CAR! Free addition for all Members!
– – Our original Legends car, geared up for the dirt tracks!
– – This dirt version of the Legends car is included as part of the free Legends ’34 Ford Coupe package. 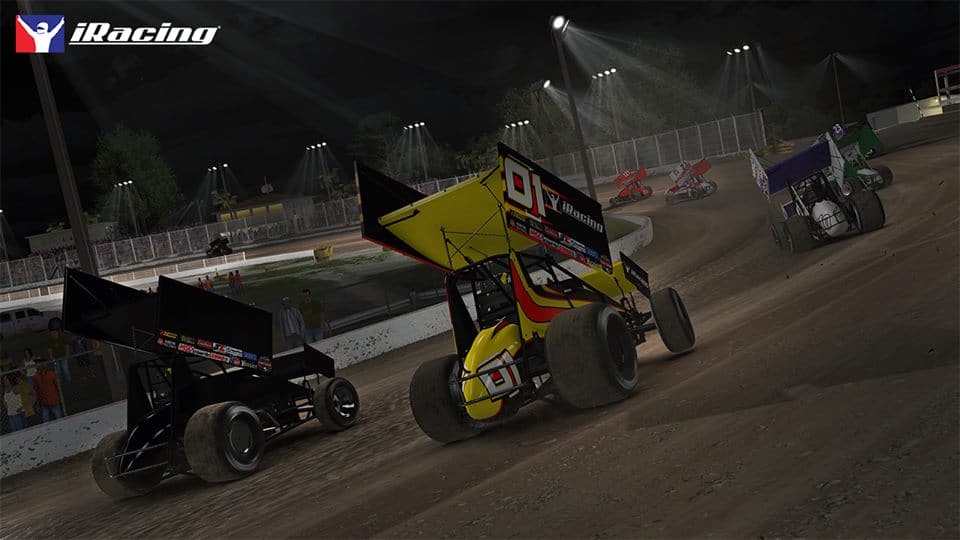 Dirt Sprint Car
– NEW CAR!
– – Nothing better epitomizes grassroots American racing than a Winged Sprint Car slinging dirt on one of the scores of 1/4, 3/8, 1/2, and mile dirt ovals dotting the countryside. The Sprint Car’s iconic roller skate shape hearkens to an era when the likes of Bill Vukovich, Jimmy Bryan, and Parnelli Jones scratched and clawed their ways from the short tracks of America to a front-row seat in the Indianapolis 500. More recently, Jeff Gordon, Tony Stewart, Kasey Kahne, and Kyle Larson have used Sprint Cars as a stepping stone to NASCAR even as the likes of Steve Kinser, Sammy Swindell, Donnie Schatz, Joey Saldana, Bryan Clauson, and Levi Jones have fashioned good (if hard-earned) livings racing World of Outlaws and United States Auto Club Sprint Cars three, four, and five nights a week while their counterparts compete in Canada and South Africa, Australia and New Zealand.
– – There are several classes of this vehicle available, all of which are included when purchasing this new vehicle. The classes are:
– – – Dirt Sprint Car – 305 C.I.D. engine
– – – Dirt Sprint Car – 360 C.I.D. engine
– – – Dirt Sprint Car – 410 C.I.D. engine

Dirt Street Stock
– NEW CAR! Free addition for all Members!
– – Our original Street Stock, geared up for the dirt tracks!
– – This dirt version of the Street Stock car is included as part of the free Street Stock package.

NASCAR Camping World Toyota Tundra
– NEW DIRT MODEL! Free addition for all Members who already own this vehicle!
– – Our original Tundra truck, geared up for the dirt tracks!
– – The dirt model of this vehicle will now be automatically used whenever paired with a dirt track. The dirt version of the Tundra is included in the Tundra truck package. 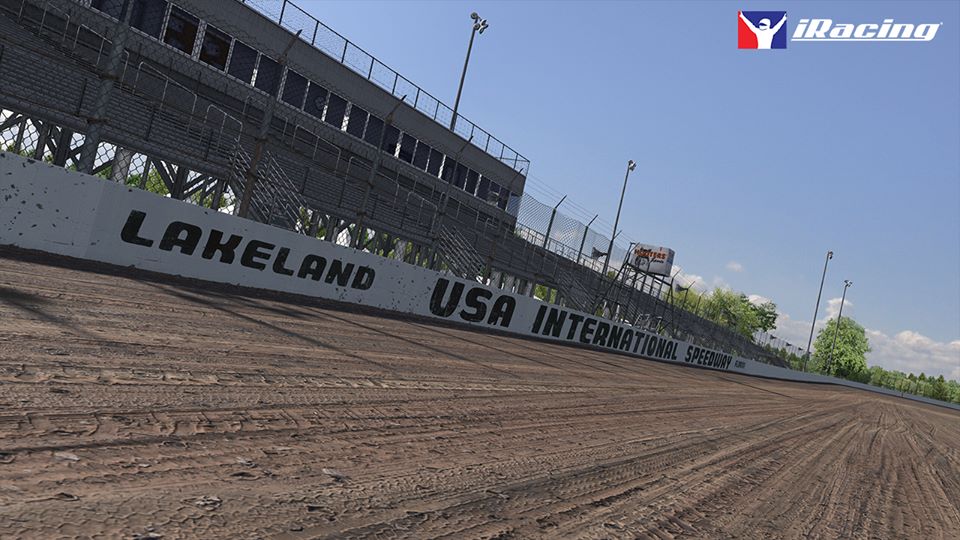 Eldora Speedway
– NEW TRACK!
– – Both by geography and history, Eldora Speedway stands at the epicenter of dirt track racing. Situated in what was once an Ohio cornfield near the Indiana state line, the half-mile clay oval lies in the very heart of the Midwest’s roaring racing scene. And as host to some of the biggest events on the short track racing calendar annually – events that have attracted the top names in American racing for more than half a century – Eldora can rightly bill itself as ‘The World’s Greatest Dirt Track.’

USA International Speedway
– A NEW DIRT CONFIGURATION HAS BEEN ADDED! Free addition for all Members!
– – While the real USA International was a super quick, three-quarter mile paved oval, thanks to iRacing’s talented artists and software engineers, iRacers (and only iRacers) can now race on a virtual dirt version of the Lakeland, FL track. With its long straights and tight but steeply banked turns, USA International requires both a strong engine and a finely-tuned chassis, and poses a stern test of Sim racers’ ability to wheel their dirt cars around a lightning quick oval.

Volusia Speedway Park
– NEW TRACK!
– – Known as ‘The Fastest Half Mile in the World,’ Volusia Speedway Park is a favorite stop on both the World of Outlaws and Super DIRTcar Series calendars, as well as home to the Annual Powell Memorial for Late Models and The Iron Man 100 for V8 Thunderstocks.

Williams Grove Speedway
– NEW TRACK!
– – Hearkening back to an era when America’s dirt tracks were as much a part of county fairs and amusement parks as peanuts and cotton candy, Williams Grove Speedway is located in south central Pennsylvania adjacent to the amusement park established by the Williams family in the 1850s. It was not until the late 1930s, however, that Emmett Shelley convinced the owners of Williams Grove Park to build a speedway across the street, a half mile dirt track that has since become inextricably woven into the DNA of American racing.

NEXT POST
Here’s what you need to play iRacing