Show Me 100 results from May 26, 2017 in the Friday portion of the Lucas Oil Speedway Crown Jewel event featuring the Lucas Oil Late Model Dirt Series

Tonight, it’s night two of the Show Me 100. This is the largest weekend on the tour thus far for the Lucas Oil Late Model Dirt Series. Friday night is The Tribute to Don and Billie Gibson and the final preliminary night at Lucas Oil Speedway in Wheatland, MO.

View full Show Me 100 results from night two below. 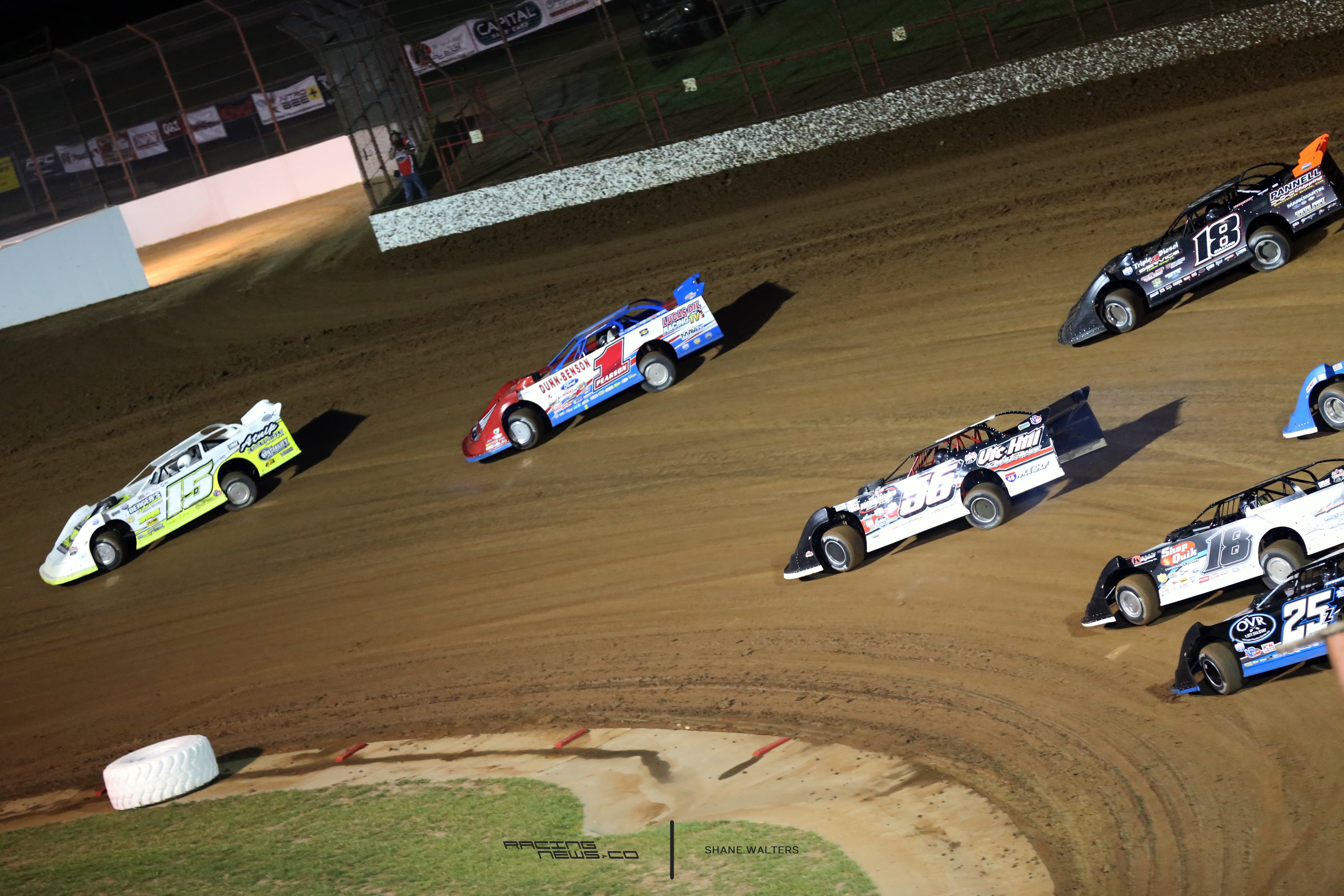 Peyton Looney jumps out to the early lead in heat 1. He’s running the middle to the top. Earl Pearson Jr won’t go away. Pearson has been working the bottom the whole race. He pulls even at the flag stand, one to go. Caution. Pearson will have to start from the beginning. Looney gets the restart of a lifetime. He clears Pearson to the flag stand by 5 car lengths.

Dennis Erb Jr leads Scott Bloomquist in heat 2. Its short lived, caution. Billy Moyer Jr is in the front straight away wall. Spoiler damage, he continues but the yellow is out. Dennis Erb Jr check out on the field again. Bloomquist 2nd, Billy Moyer Sr 3rd.

Don O’Neal takes the lead from outside pole in heat 3. He swung around Justin Duty and drove off into the distance. Shannon Babb worked around Duty as well.

Darrell Lanigan checks out to the early lead in heat 4. Bobby Pierce nearly nose first into the front straight away wall, he thought he was clear. The #81 backs out saving him. Lanigan gaps the field to the win. 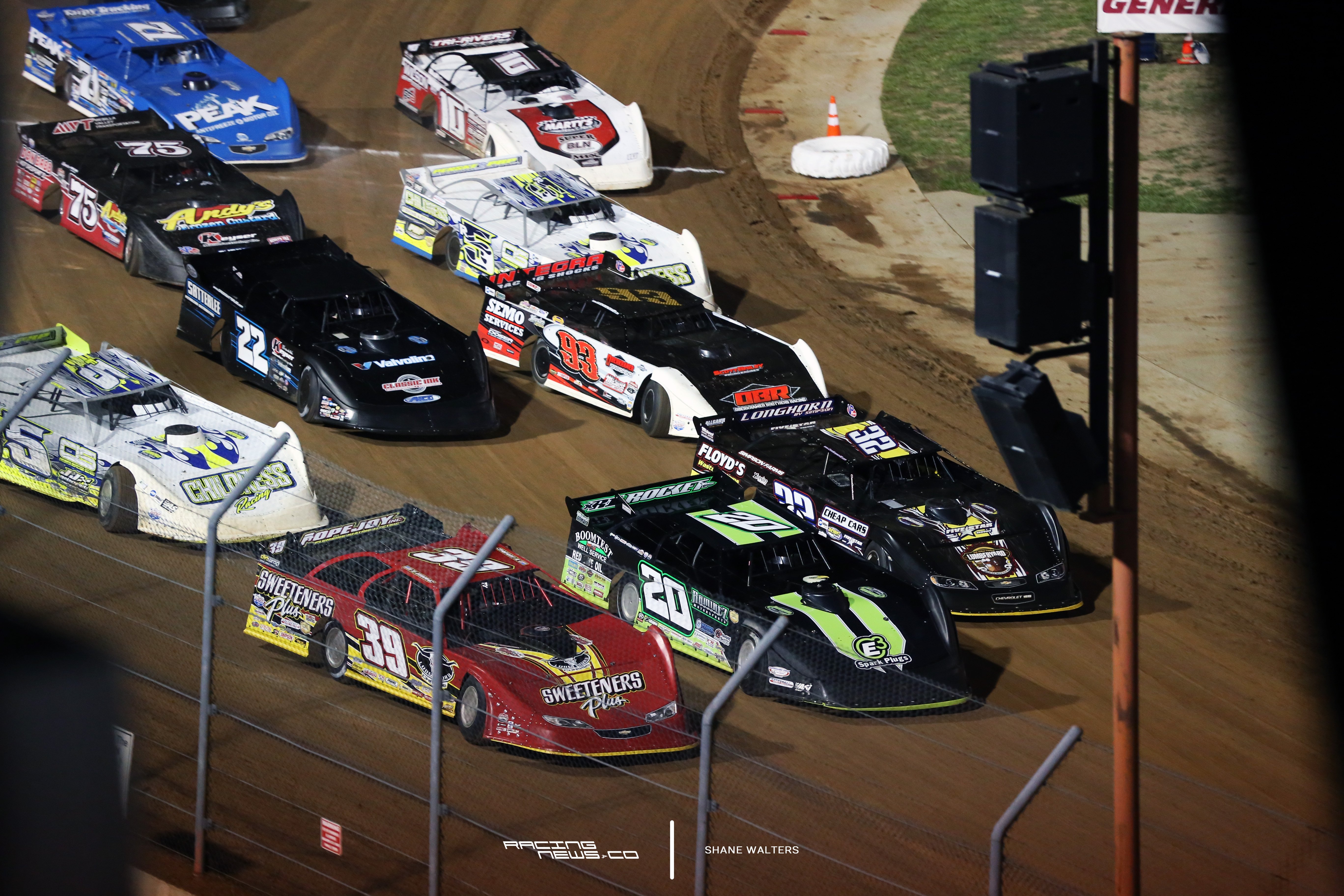 The start of heat 5 looks like the parade laps. Jimmy Owens, Tim McCreadie and Chris Simpson are 3 wide before the exit of turn 1. Same from row two. Owens leads flag to flag.

In heat 6, Mike Marlar is your early leader. Francis is fighting hard on the outside, he started 6th. Josh Richards who missed the main last night is rolling around the bottom in search of a win. Richards is going to come up short but he’s in the show. Steve Francis fought his way into 3rd.

B-Main number 1 up next. Randy Timms lost the lead early to John Duty. However, it just took him a few laps to pick up momentum on the bottom. He clears Duty on the back straight. Meanwhile, Mason Zeigler is throwing side job after slide job. He started 7th, he’s running 3rd. He passing high, low doesn’t matter. Zeigler wants to start the main tonight. He passes both front runners. Timms loses the fight with Duty on the last lap.

They’re crashing before the start finish line  in B-Main number 2. Only two spots available, they all want them. Six wide at the start finish line rarely works too well. Green, Jesse Stovall is on fire. He makes it four wide off turn two. He picks up a whole bunch of spots. He’s in 3rd. He pulls a slider on Brantlee Gotschall, takes the final transfer spot. It’s not over, Bobby Pierce is climbing. One lap to go he pulls a slide job on Stovall to take the final spot. It’s still not over, one to go. Stovall drives it deep into turn 3. Light on the brakes, he body slams Pierce in the final corner. He steals back the final transfer spot. Go big or go to the trailer.

Satterlee drove off at the start of B-Main number 3. Rodney Sanders was there, inches from the back bumper. Satterlee stuck to the high-side. Until he saw Sanders down low to his inside. The next corner, he took the bottom lane away. Chris Simpson might have been faster than the both of them, he missed the cut by one spot. 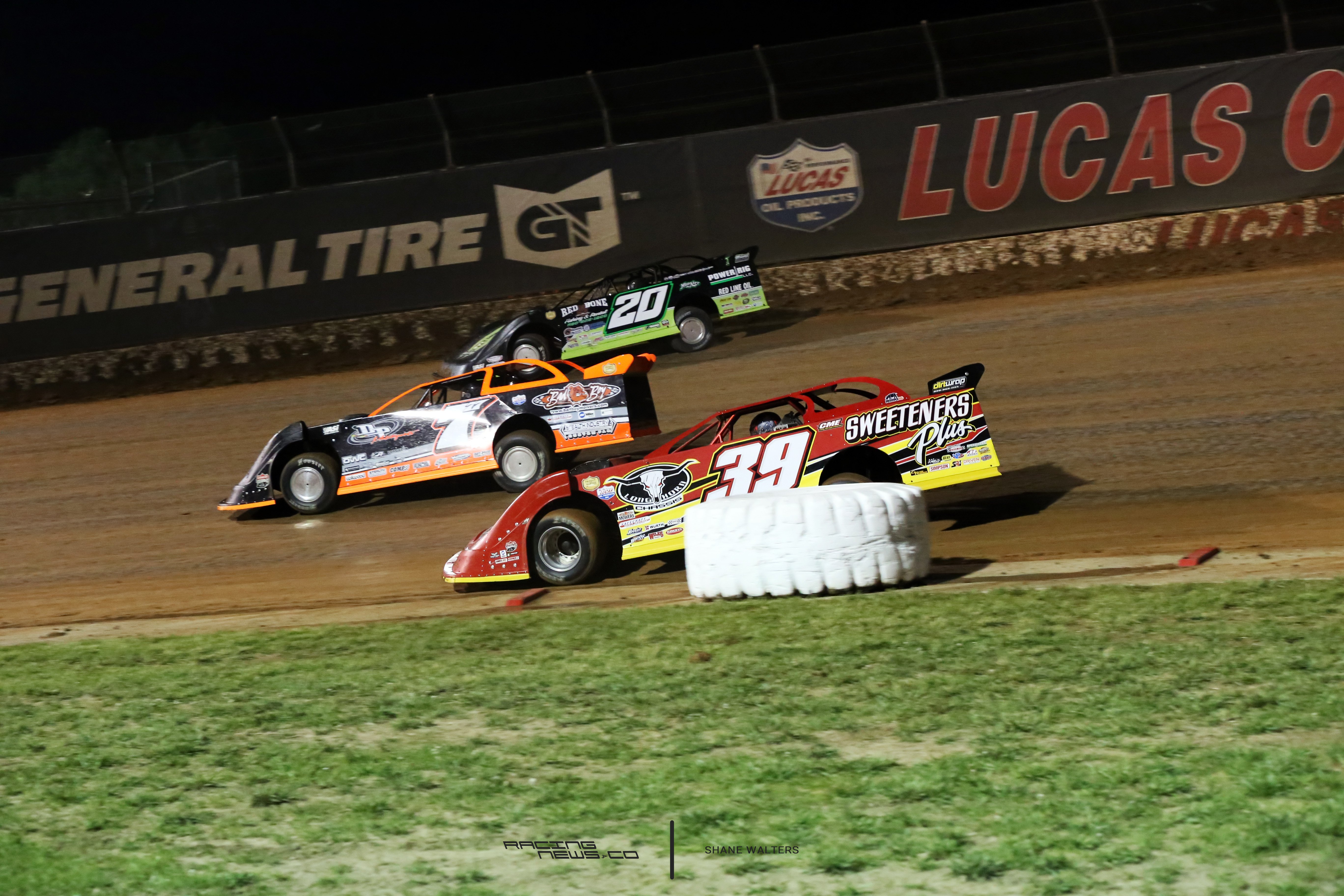 Lanigan is in the wall! He was racing Payton Looney in 3-4. They both ran out of room. Lanigan is over the cushion. Slight damage but he’ll be sent to the tail of the lead lap cars.

Tim McCreadie wins night two of the Show Me 100!

McCreadie comments from victory lane, “I want to thank the Labonte family for putting faith in me to drive their cars. A Longhorn Chassis won here last night with Earl [Pearson] and we brought home the win tonight. From where we started and as good as the track was, I thought it would be tougher than it was. The car rolled through the corners at the beginning of the race and I was passing cars low and high, it handled like a dream.”
The winner continued, “We showed a lot of speed tonight like last night. But when I got up there with Jimmy [Owens] I knew it would be tough to get by him. He runs so well here, if you can pass Owens here, then you have really done something special. This is my first win here and I will probably never get close to what he has done at this race track. To beat guys like Jimmy and [Don] O’Neal you must be near perfect to get it done. I just hope tomorrow night that we can run all 100 laps consistently, but you never know.”

Tomorrow night, it’s the big one, the Show Me 100 dirt late model event. The feature Show Me 100 Lucas Oil Late Model Dirt Series event will pay $30,000 to the winner.

Lucas Oil Championship Point Standings (as of May 23):