Lucas Oil Speedway results from May 25, 2017 in the Cowboy Classic portion of the Show Me 100 featuring the Lucas Oil Late Model Dirt Series

Heat 1 Mason Zeigler is in route to the win. Bloomquist runs 2nd. Zeigler pinches the entry of turn 3. Bloomquist makes a wide entry arc. He comes off lower on the exit and with more momentum. Bloomquist takes the lead. He drives off the winner. 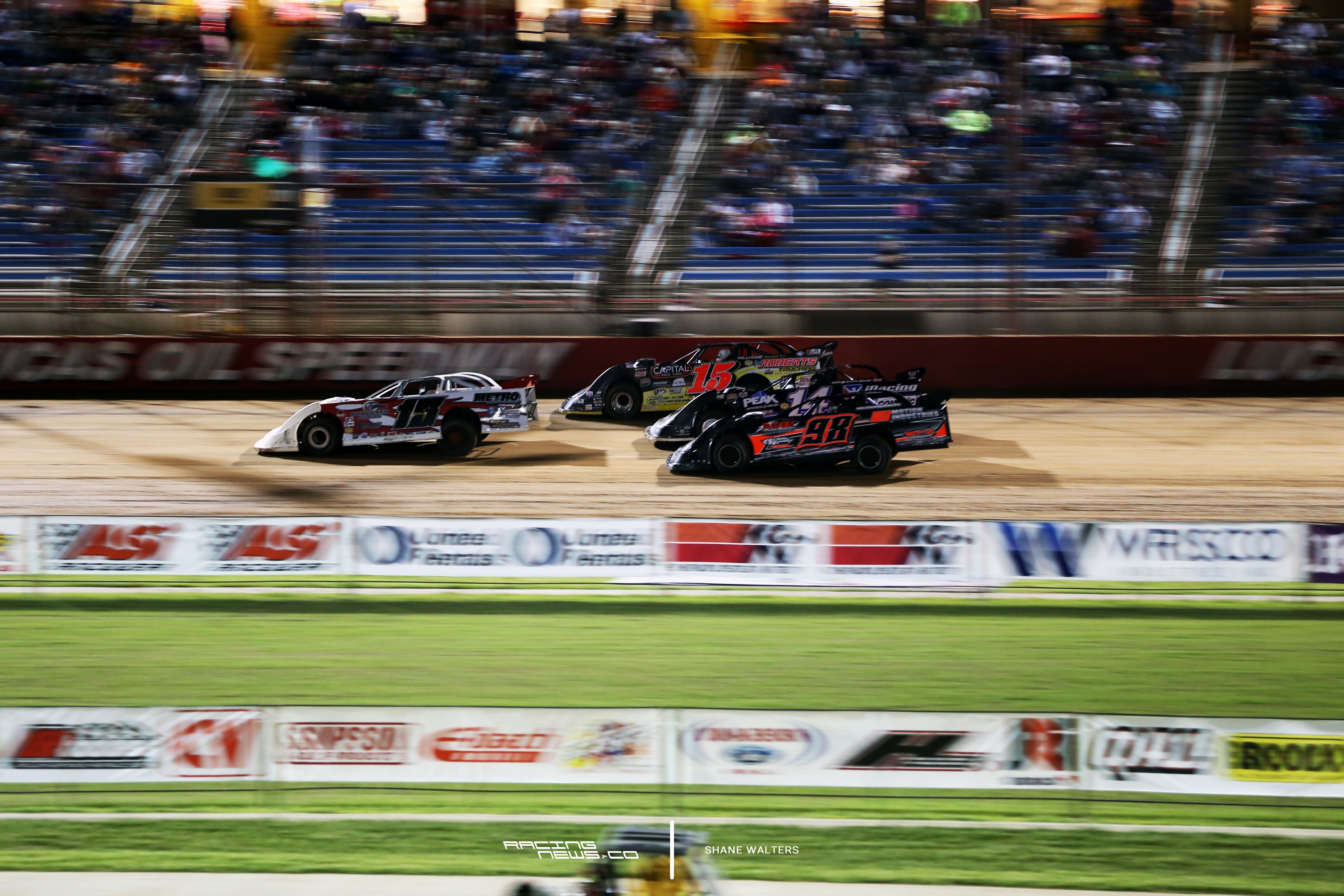 Heat 2, LOLMDS regulars Steve Francis and Darrell Lanigan start in the second row. They are 3 wide before the start finish line. Steve Francis gets a great jump on the outside. Now back to the inside. Francis nearly the leader in 1 lap. Meanwhile, Lanigan is also climbing through the field. He reels in Francis, makes the move to the outside. Lanigan drives away from the field, heat 2 winner.

Payton Looney led flag to flag in heat number 3. Billy Moyer Jr was making up ground on the high side. He came up just short of 2nd, finishing 3rd.

Heat 4 Jesse Stovall led flag to flag. The race was for 3rd. Satterlee high, Chris Simpson low. Simpson nearly clears Satterlee at the exit of two. Satterlee drives it in hard, stomps the brakes and holds the position.

Heat 5 was all Earl Pearson Jr. He cleared a full straight-away on Tim McCreadie and Dennis Erb Jr.

The 6th and final heat, led flag to flag by Jimmy Owens. He’s already won the Show-Me 100 four times. He wants another. Billy Moyer Sr made a rare appearance, he finished 3rd.

B-Mains up next. They are far more important tonight. No provisionals will be given to the Lucas Oil Late Model regulars.

It’s more intense given each of these B-Mains look like an A-Main anywhere else. Furthermore, points are collected throughout the weekend. Drivers need to collect points tonight for a good starting position in Saturday’s main event.

If Friday rains out, it will be a wash, the starting lineup would then be set based on tonight’s results. Basically, it’s going to be some super intense B-Main racing! 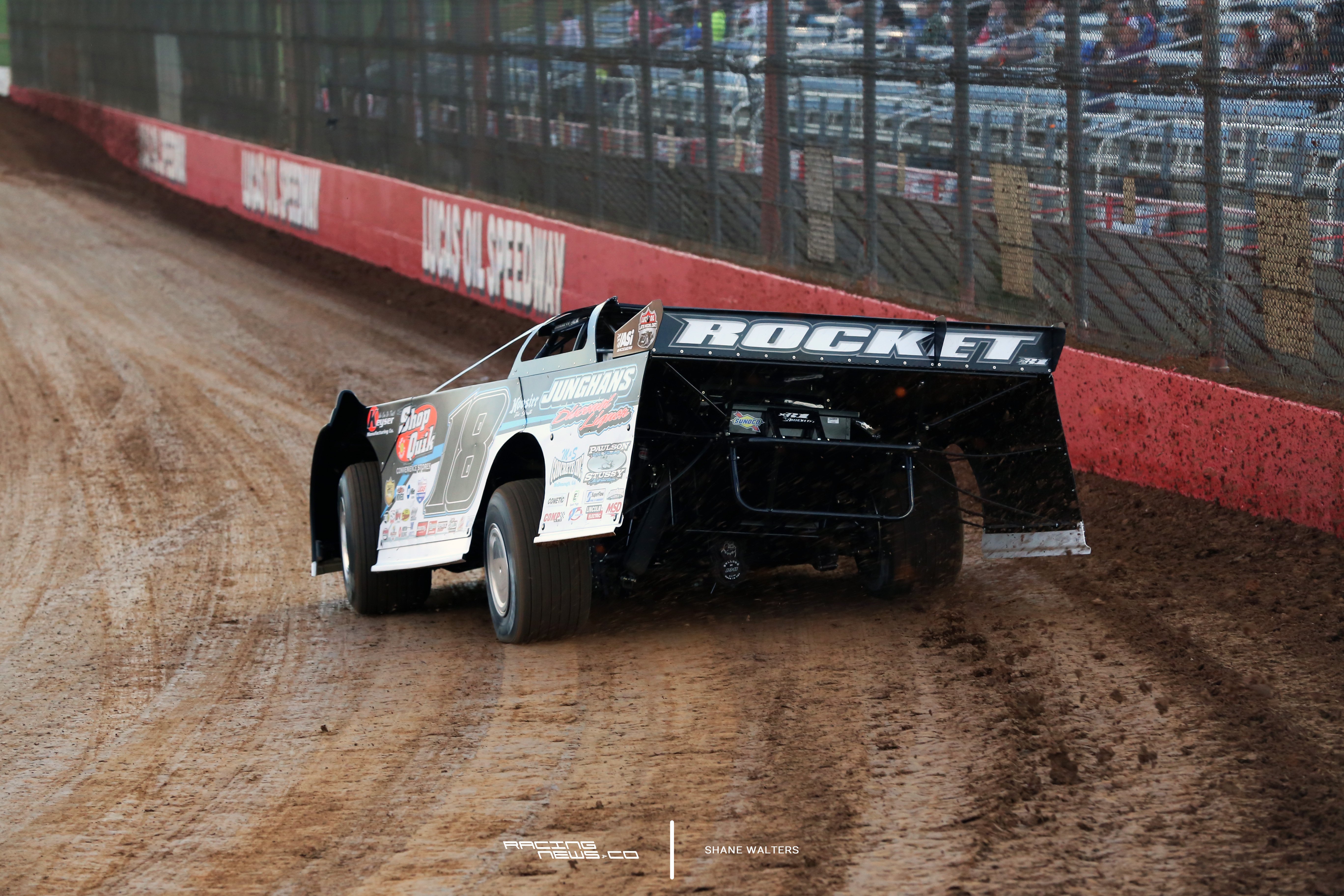 Chase Junghans won B-Main number 1. Rodney Sanders took the other transfer spot. Shannon Babb was running the high side, he nearly made it coming one spot short. Boom Briggs failed to transfer.

A-Main feature up next. $6,000 to win, 45 laps. Scott Bloomquist and Lucas Oil Speedway favorite Jesse Stovall sit on the front row. It will be a new track for them as they head into turn 1. Track workers watered and worked the top lane, just the top. 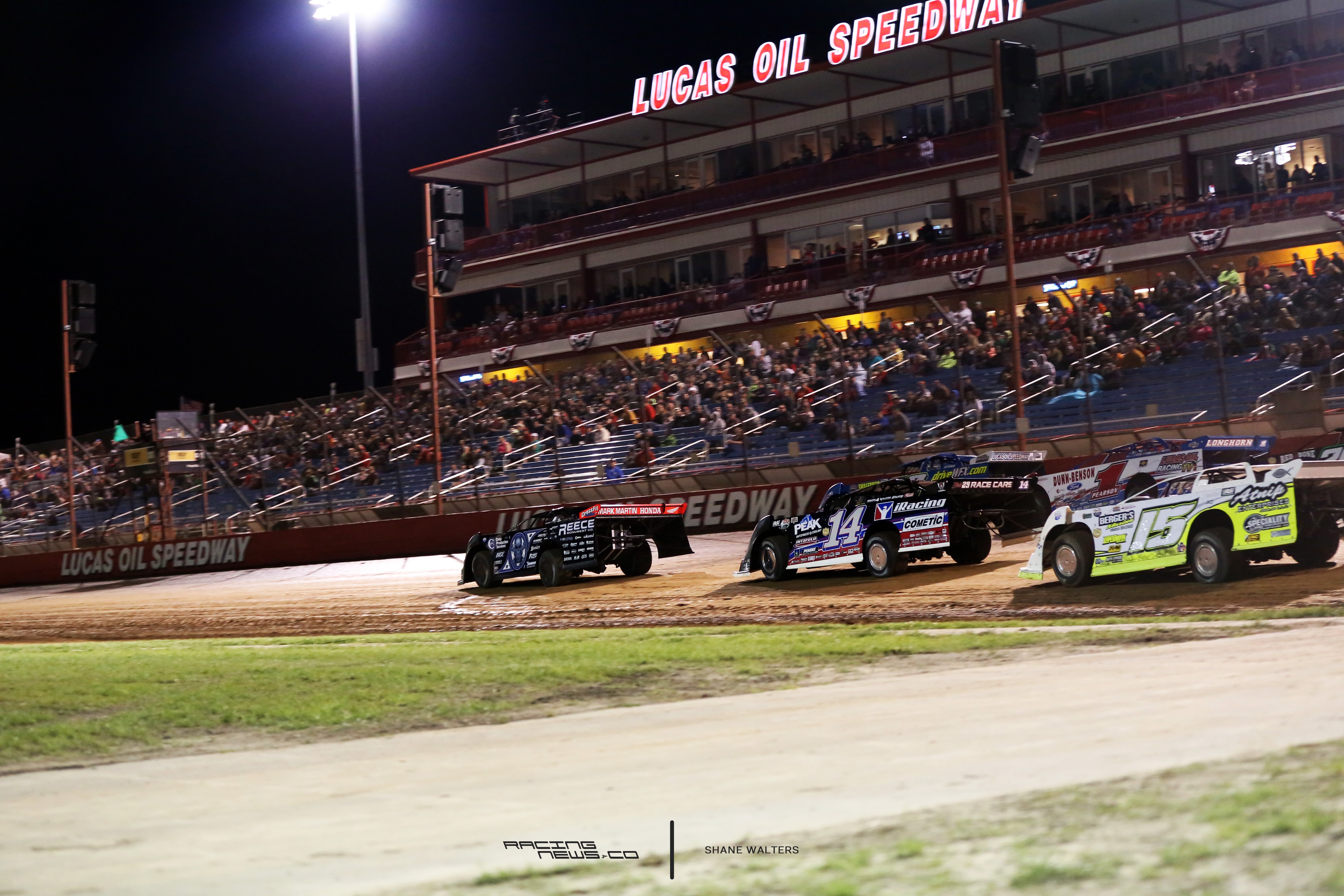 Green Flag. Jesse Stovall and Earl Pearson Jr both work passed Bloomquist on the outside in turns 1-2. The highside was significantly quicker on the initial start.

The field is 3 and 4 wide behind the leaders. This is fantastic racing throughout the entire dirt late model field in Wheatland, MO.

Earl Pearson Jr is already looking under Jesse Stovall for the lead. New leader, they swap lanes, Pearson Jr to the top, Stovall to the bottom.

The laps click by quick around here. earl Pearson Jr moves to the bottom to work around lapped traffic. Jesse Stovall looks to the middle. He’s going to made it 3 wide and for the lead as they race through the lappers.

Stovall uses the 8 tires are better than 4 method. He gets into the lapped car of Dennis Erb Jr, uses him as a cushion. It doesn’t work out well for Stovall. He’s lost a ton of ground to Pearson Jr. Now, Bloomquist and Jimmy Owens are all over Stovall.

Bloomquist and Owens are both passed the #00. He might have an issue after contact with Dennis Erb Jr. So far, this race has gone caution free, still a lot of action on the track. 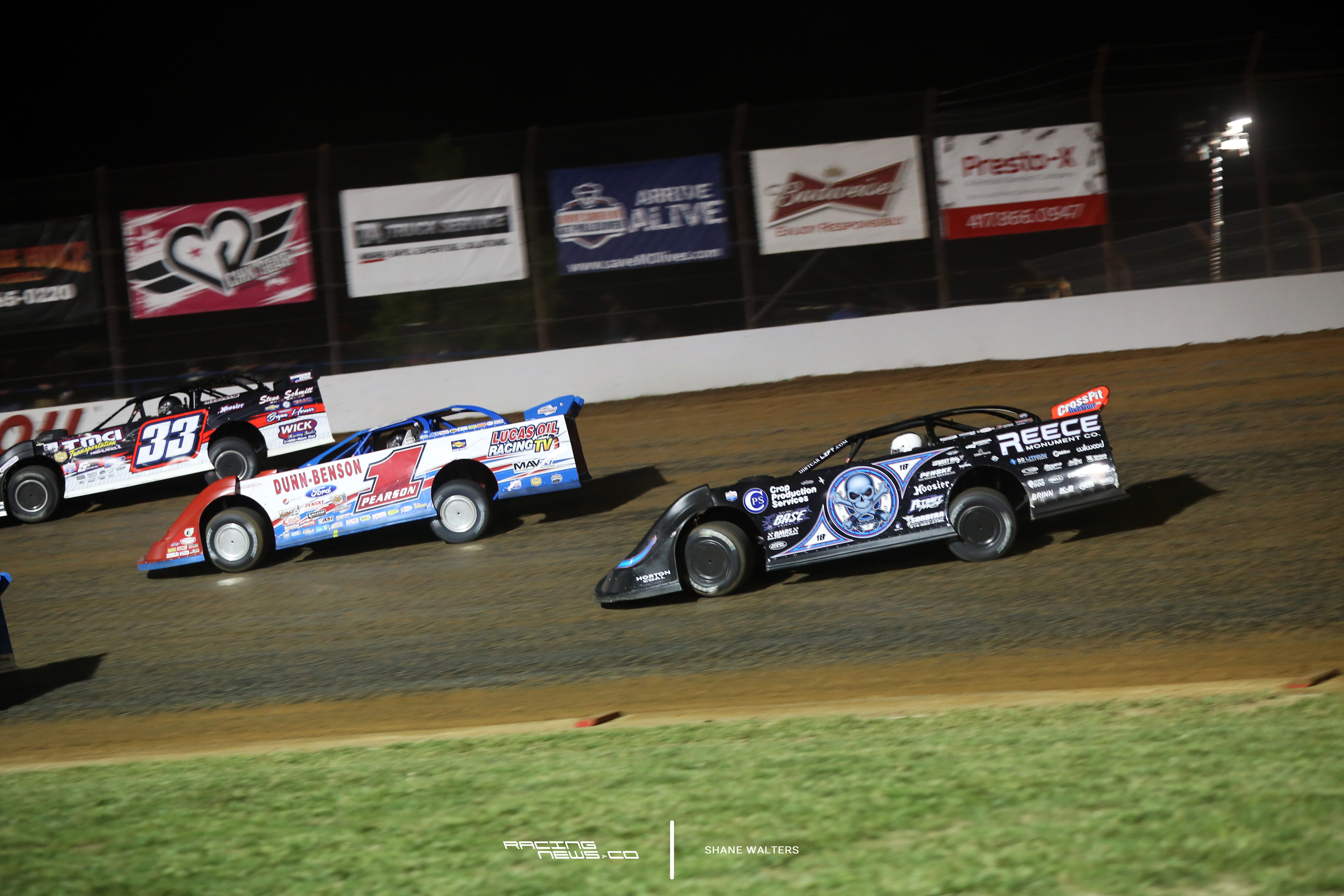 Scott Bloomquist is now catching Earl Pearson Jr. He have another battle for the lead. Pearson Jr noticeably starts pushing harder once he saw Bloomquist to his left. The Lucas Oil car begins to checkout.

Caution, lap 38. Stovall is around. I caught the tail end of it, but Dennis Erb Jr might have been involved.

7 lap shootout. The field is going to get another shot at Earl Pearson Jr. Restart, Bloomquist looks low. He doesn’t have enough for Pearson Jr. He’s gone again.

Earl Pearson Jr is going to take the Lucas Oil Racing TV car to victory lane in night 1 of the Show-Me 100 at Lucas Oil Speedway.

The Crown Jewel dirt late model event continues tomorrow night. They will pay another $6,000 to the winner of The Tribute to Don and Billie Gibson on Friday. On May 27th, it’s the big one, the Show Me 100 dirt racing event. The feature Show Me 100 Lucas Oil Late Model Dirt Series event will pay $30,000 to the winner.

Lucas Oil Championship Point Standings (as of May 23):