His comments last week were, “It’s a shame that so many drivers and teams day was ruined by the results of another “debris” caution towards the end of the race today.” 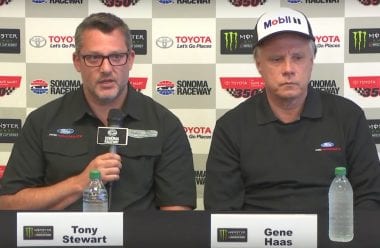 This week, the thoughts have changed. Tony Stewart actually applauded NASCAR (see video below). Which might very well be the first time in history he’s done so. Anyone want to check Tony Stewart’s motor coach? I just want to make sure Tony’s pet pig didn’t fly away.

From the press room at Sonoma Raceway, “Last week’s, last week. It’s so easy for cars to go off track here and it happened all day long. A couple cars even spun out, but kept going.”

“So, there was a lot of opportunity, could have got that debris caution or whatever during the race. But it was nice to see that the race actually got to play out.”

Some teams were really looking forward to a debris caution. Even going to the lengths of lobbying for NASCAR to throw the yellow.

Tony Stewart calls out Joe Gibbs Racing, “It was interesting, listening to some of the Gibbs drivers, the gamesmanship they were playing.”

Stewart explains, “You know they pitted, then came back out. Then immediately started screaming ‘Debris on the racetrack’ ”

Stewart understands, “I thought that was really convenient on their part. But you know, it’s gamesmanship. You know, they’re smart. Of knowing how to play the game. But I’m glad NASCAR didn’t bite on that one.”

NEXT POST
Kasey Kahne on Sonoma Crash: “He panicked & turned right instead of left”